From the roof of his concrete home, Luiz Claudio looks out at the bulldozers and construction cranes assembling the Olympic Park of Rio de Janeiro. (Opening ceremonies, August 8!) The sadness seeps through his sharp green eyes. Below, Penha points to a moss-covered entryway, which is crowded with a bicycle, refrigerator, wheelbarrow and red couch, with a stuffed animal dangling off the armrest. “I got married there,” Claudio says. The cove served as a community chapel for over a half dozen years. And if the city of Rio had its way, it would be razed, along with the rest of Claudio’s home that he shares with his wife, mother-in-law, daughter, brother and sister, all to make room for the Olympic party this summer.

Claudio, 53, lives in Villa Autódromo, one of the hundreds of poor neighborhoods in Rio, or favelas, scattered across the streets and lush hills of a cidade maravilhosa (the marvelous city). The backhoes have already leveled most of Villa Autódromo, leaving his community in ruins. According to non-profit World Cup and Olympics Popular Committee of Rio De Janeiro, throughout the city some 4,120 families have been removed from their homes due to the Olympics.

But Claudio, who’s wearing a white t-shirt that reads Rio Sem Remoções (Rio Without Removals), and a few dozen other final holdouts refuse to leave, forcing a final standoff between the city and impoverished Villa Autódromo residents. This matchup carries real-life consequences greater than any 100-meter sprint final. 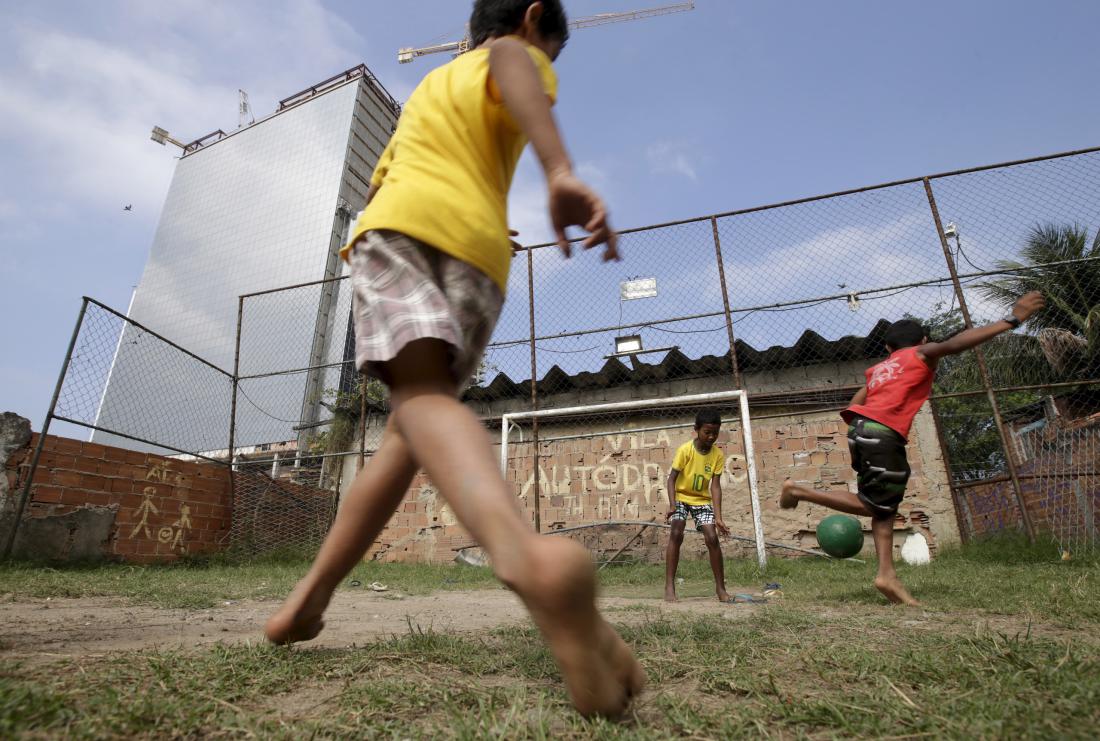 Will the city forcefully evict the last Autódromo holdouts, a move not exactly in keeping with the Olympic spirit of fair play? Will it just build around the last roughshod homes, threatening the pristine veneer this Brazilian megacity wants to splash all over its Games, the first ever held in South America? Or will the city finally fulfill its vow to incorporate the favela into the Olympic planning, and improve infrastructure and services within the community in ways that will last well after the Olympic flame has gone on?

Given that Villa Autódromo looks like a war zone, thanks to razing already well underway, that last outcome seems about as likely as a racewalker winning the 100. “The Olympics are being used as a pretext,” says Claudio through an interpreter, “to destroy life stories.”

The fate of the favelas are hardly the only challenge facing Rio’s beleaguered Olympic planners. The Brazilian economy is in tatters, expected to fall by some 3% in 2015. President Dilma Rousseff faces impeachment for allegedly violating budget laws. Its transport infrastructure is outdated. Rio’s waters are polluted, threatening the health of thousands of athletes and spectators who will descend upon the city for the 2016 Olympic Games. The country’s leaders enter the Olympic year facing a host of unwanted tests, which include community opposition to the Games.

Villa Autódromo, settled as a fishing village along the Jacarepaguá Lagoon in 1967, now occupies prime waterfront real estate in Rio’s growing upscale Barra da Tijuca neighborhood. Residents are convinced that the after the Olympics, developers will build luxury condos with sweeping views of the lagoon—condos none of them will ever live in.

Right now, however, Villa Autódromo is in rubble. A tire, a closet, rags, bottles, a bathtub and other remnants of destroyed homes lie amidst the rocks, tiles, smashed concrete and mounds of dirt. A dog with a bloodied, partially bitten-off ear scampers about; people say he was the pet of a family who moved out. A nude doll sits atop a gutted wall. A rainy day turns streets into slop. “It looks like Afghanistan,” says Maria De Loures da Silva, a Villa Autódromo resident.

So it’s surprising that anyone would choose to stay put in such miserable conditions. Especially when the government is offering residents either cash compensation—Claudio says he’s heard his plot of land is worth some $500,000—or relocation into government-sponsored housing in the area. Catalytic Communities—a Rio-based NGO that works with favelas—says that of the some 700 families that lived in Villa Autódromo before clearance began, around 40 remain. Why do they want to stay?

“When we got here, we had nothing,” says one resident who’s lived in the favela for 20 years, and declined to give his name in fear of government retribution. “We developed this land.” He points out at his house. “There are 72 truckloads of earth in here. This home is everything to me.” While gangs and drug kingpins still control many favelas, Villa Autódromo residents praise the safety of their community. “Nothing justifies me leaving here,” says Sandra Souza, 47, who’s raised four daughters, ranging in ages from 11 to 20, in Villa Autódromo. “I don’t think the money they’re offering is valid. It’s dirty money.”

In Villa Autódromo, residents shout through the graffiti scrawled all over shattered homes, and the wall separating the Olympic construction zone from the neighborhood. A BARRA C/ POBRES A POLITICIA SEM CORRUPÇÃO. (“Barra [da Tijuca] with the poor, politics without corruption”). AS OLIMPIADAS PASSAM A JUSTICIA FICA SUJA (“The Olympics come, justice gets dirty”). NÃO SOMOS BOBOS! SABEMOS QUEM ESTÁ NA LUTA E QUEM ESTÁ AQUI POR DINHEIRO! (“We are not fools! We know who’s with us and who’s in it for the money!”) RIO DE JANEIRO NA LAMA (“Rio de Janeiro in the mud).

One message is scrawled in English, facing what used to be dozens of homes along the lagoon: GAME OVER.

Even an Olympic construction worker, who is benefiting from the burst of building, shares sympathy for the residents. “Brazil is a party,” he says while sipping on local Antarctica beer in front of an Autódromo shop during a break. “But Olympic money could have gone to improving education or improving security. They’re taking away the homes of these humble people to make this event.”

“When Rio got the Olympics, people in the favelas could feel change,” says Theresa Williamson, executive director of Catalytic Communities and editor-in-chief of Rioonwatch.org, a community reporting site. “There was a strong sense of hope across all economic brackets. But since 2013, the mask has been taken off. It’s become clear to many people that it was all a facade.”

In response to questions about promises to incorporate Vila Autódromo into Olympic planning, the uses of the community’s land before and after the games, and the city’s response to residents who say they just want to stay and be left alone, a city of Rio spokesperson sent an email response. “The families who had to leave Vila Autódromo were either on the route of the public lanes under construction or in areas of environmental protection by the lagoon,” the spokesperson wrote. The City also noted that to resettle the residents, it built new housing—”with green areas, a swimming pool, a gourmet lounge, nursery and commercial space”—or offered compensation. “The negotiation process with the Villa Autódromo residents has always been transparent.”

Delmo de Oliveira, 51, doesn’t seem interested in any offers. As the Olympic encroach on his community, he pounds on a hammer while constructing an additional floor to his house. The city wants him out; de Oliveira doubles down. “If I leave now, how am I going to live?” de Oliveira says. “I have no other choice.” He says he won’t consider compensation. “They’re not trying to buy my house,” says de Oliveira. “They’re trying to buy my dignity.” NEM TODOS TEM UN PRECO reads a sign on the side of his house.

Not everyone has a price.