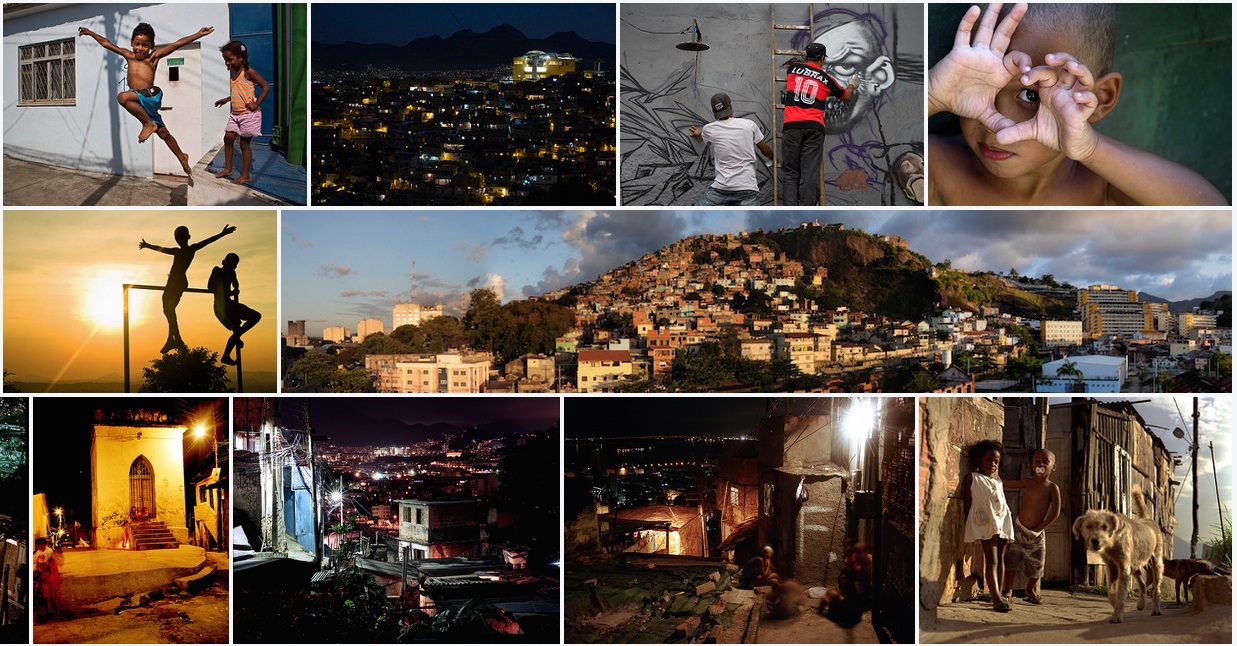 December 21, 2015 — As 2015 draws to a close, we at Catalytic Communities would like to express our huge thanks to everyone who has made our work possible during this critical year for Rio and its favelas. The year between the 2014 World Cup and 2016 Olympics saw policy after initially hopeful policy–from pacification to public housing–show their true colors as favelas continued bearing the greatest detrimental impacts of the 2016 Games, particularly as the Brazilian economy as a whole turned sour. Over the course of the year, we also saw a re-escalation of public protest. A year that started out slow in global media coverage in the aftermath of the World Cup, ended with extensive coverage in the lead-up to the Olympics. This has brought intense international attention to Rio’s favelas and CatComm has continued to work throughout the year to shape the local and international debate and amplify community voices, while recommending policy alternatives, in order to advance the possibilities for participatory, sustainable development models for informal communities in Rio and beyond.

From this year’s Indiegogo campaign: Over the next year, through August 2016, Rio de Janeiro will be in the global spotlight like it has never been before. Thousands of reporters will descend on the city, charged with producing stories. Many of them will be on Rio’s favelas.

With this comes the opportunity to channel that spotlight in creative and productive ways, facilitating nuanced reporting that destigmatizes these misunderstood communities, often victims of lazy sensational journalism.

This is important because, as our work has shown, good reporting leads to policy changes and outright reversals, compensation increases for residents facing eviction, and dramatic community empowerment. Just as importantly, however, it sets the record straight on Rio’s favelas in a way that paves the way for productive policies.

Here we take a look at CatComm’s highlights of 2015, a year which has seen us relaunch our RioOnWatch news portal in Portuguese and launch our RioONWire favela news wire service, advance the debate around favela qualities and language, and shape the media narrative of Rio’s favelas on a global scale. However, human rights abuses and forced evictions continue as preparations for the 2016 Olympics have taken on an aggressive pace and our work supporting Rio’s favelas will likely never be as critical as over these coming eight months.

Note that everything listed here was accomplished on a super efficient budget of just $100,000, thanks to 10,800 hours of our amazing interns’ time, in addition to over 100 dedicated and talented volunteers, translators, collaborators, and our core staff of five. We would also love your input on our progress. And your support is what makes it all possible, so please consider making a donation now.

Here are the highlights from 2015: 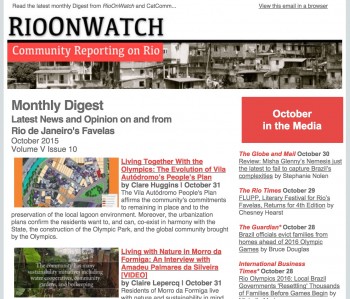 October: Segregation | Raise Your Voice | Designed to Live Together

August: One Year to Go to #Rio2016 | Best/Worst Media | Participation

We have now built out all the ingredients–the networks, platforms, content–and established the reputation we need to scale our impact through the Rio Olympic Games, to take place in August 2016. Our single-pointed focus during these coming months is to take advantage of the one-in-a-kind opportunity afforded Rio by the global spotlight in the lead-up to the Olympic Games, to address the underlying enabler of poor policy towards favelas: stigma.

In continuing to apply our multi-year 4-Prong Strategy of (1) Strategic training and networking favela activists with broad networks of support, (2) Broadly communicating the issues and values of the favela based on community perspectives, (3) Developing and proving the value of participatory planning methodologies; and (4) Advocating on behalf of inclusive, integrative and participatory policies; with your continued support in 2016 CatComm will: