The Morning of the Fourth Exchange: Quilombo do Camorim 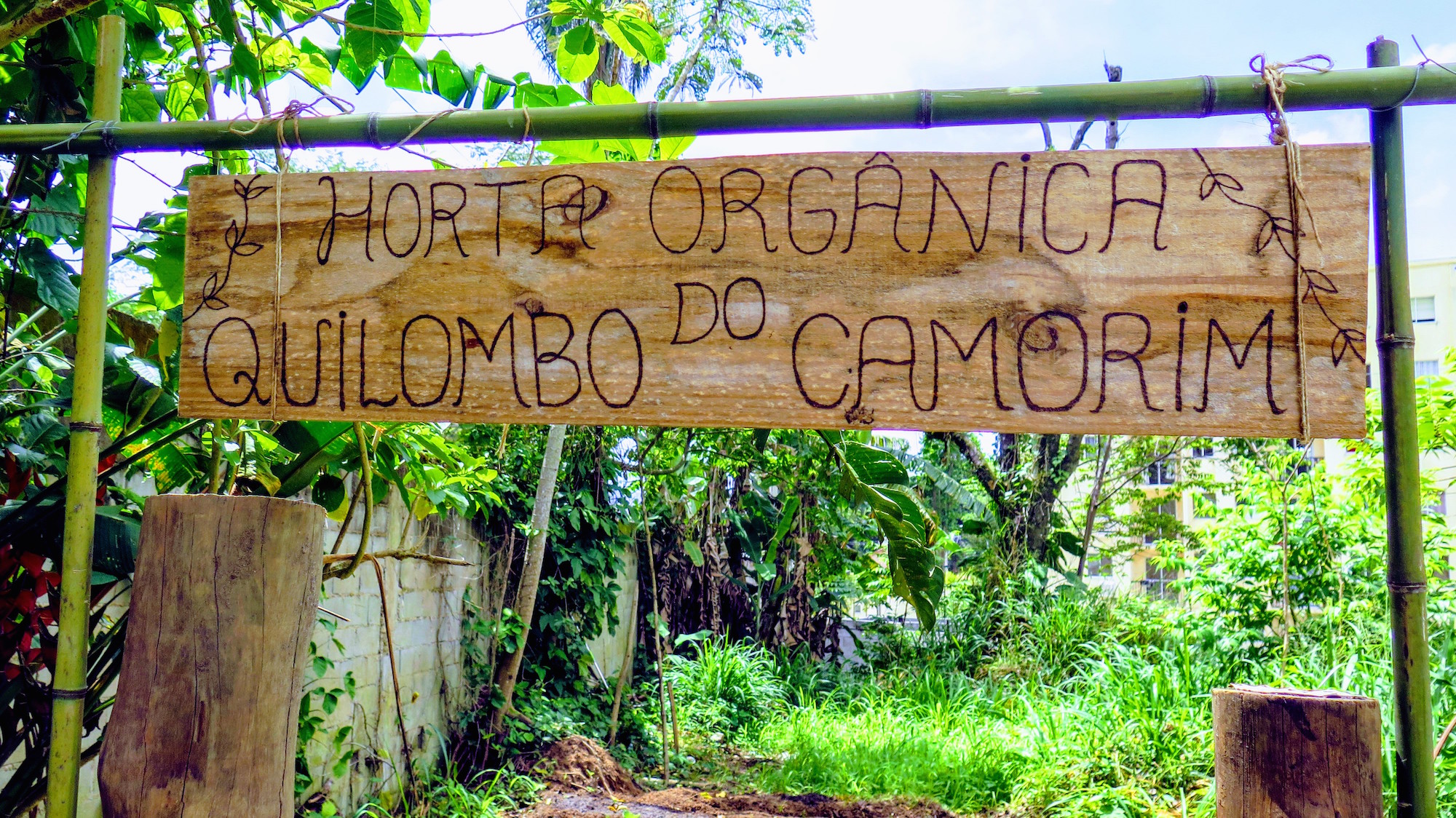 “Struggle, strength, and resistance” were the words Adilson Almeida used to introduce the Sustainable Favela Network (SFN) to his community.

Founder and president of the Quilombo do Camorim Cultural Association (ACUQCA), Almeida was born and raised in Quilombo do Camorim, a community of the descendants of runaway slaves whose history dates back to the 1600s, and which borders the Pedra Branca State Park. Almeida and his co-directors created ACUQCA to protect and promote the historical, cultural, and environmental wealth of the quilombo, located in Rio de Janeiro’s West Zone.

Almeida told SFN members during the October 20 visit that ACUQCA began when he started giving capoeira classes to local children in 2000. He explained that the young people interested in taking capoeira immediately wanted to learn martial arts. However, Almeida wanted participants to first understand capoeira’s history as a form of dance and training created by slaves. “You [have to] know your own origins. When you know your own territory and your history, you’re able to do good work.”

As Almeida’s capoeira classes continued, they expanded to include a broader perspective of Afro-Brazilian culture. Demand for the activities grew, leading Almeida and other community members to register ACUQCA as “an institution that represents the quilombo” in 2003.

ACUQCA has been in the land titling process with the National Institute of Colonization and Agrarian Reform (INCRA) since 2004. In 2014, the Palmares Cultural Foundation certified the community as a quilombo, a necessary first step in the titling process and an achievement that Almeida considers to be one of ACUQCA’s greatest victories.

Today, ACUQCA hosts cultural activities including regular feijoada lunches and jongo dance circles, in addition to organic gardening and agroforestry projects. “My ancestors used to do all of this,” Almeida explains, rooting these practices in the quilombo‘s history. The organization also trains youth from the community to be tour guides, welcoming students and locals to visit and learn about the quilombo. Additionally, the group is in the process of planning a physical space that will serve as the Quilombo do Camorim Community Center.

Almeida explained that it would take days to tell the entire history of his ancestors and that, technically, all 12,500 hectares of the Pedra Branca State Park could be considered quilombola territory: “This is where my ancestors walked, lived, wandered. Any trail that they have made, we could mark [as quilombola territory]. Recognizing the immense difficulty of such an endeavor, ACUQCA has claimed a fraction of the land in the area “to at least maintain the [quilombo’s] history preserved.”

To share Quilombo do Camorim’s history with participants in the SFN exchange, Almeida led the group on a hike through some of the community’s most important sites. “In our history, there is a great deal of environmental wealth—a biodiversity that can’t be found in any other place,” he explained. At the base of the trail, Almeida stopped to discuss the unmissable condominium looming before the quilombo. Built in 2015 to house international media for the 2016 Olympics and presently functioning as a residential complex, the condominium’s construction razed an area with deep cultural and historical significance to the community, including, by Almeida’s estimates, approximately 1,000 native trees.

Heartbroken by the loss of the land, Almeida is still dealing with the consequences. Residents of the condominium have complained about cultural events held at Quilombo do Camorim and the community’s water supply has been severely limited since being rerouted to the complex. Almeida directed SFN members to an open space that serves as a community space for residents of the quilombo. He pointed out that nearby, where the condominium was built, the soccer field, barbecue area, and meeting space that ACUQCA had created were destroyed. “If they hadn’t done that, we would practically already have a cultural center,” Almeida noted.

Despite these challenges, ACUQCA has worked to make the best of the situation. ACUQCA has held meetings, lunches, and mutirões (collective action projects) to clean up and maintain an open-air community space, and community members are in the process of planning a community center. Almeida has also attempted to improve the quilombo’s relationship with residents of the neighboring condominium, inviting them to attend events and explaining the community’s significance. Discussing an ACUQCA event in 2017 attended by thirty people from the condominium, Almeida said: “That day, I managed to talk a little bit with them and to really share the history and importance of this area.” 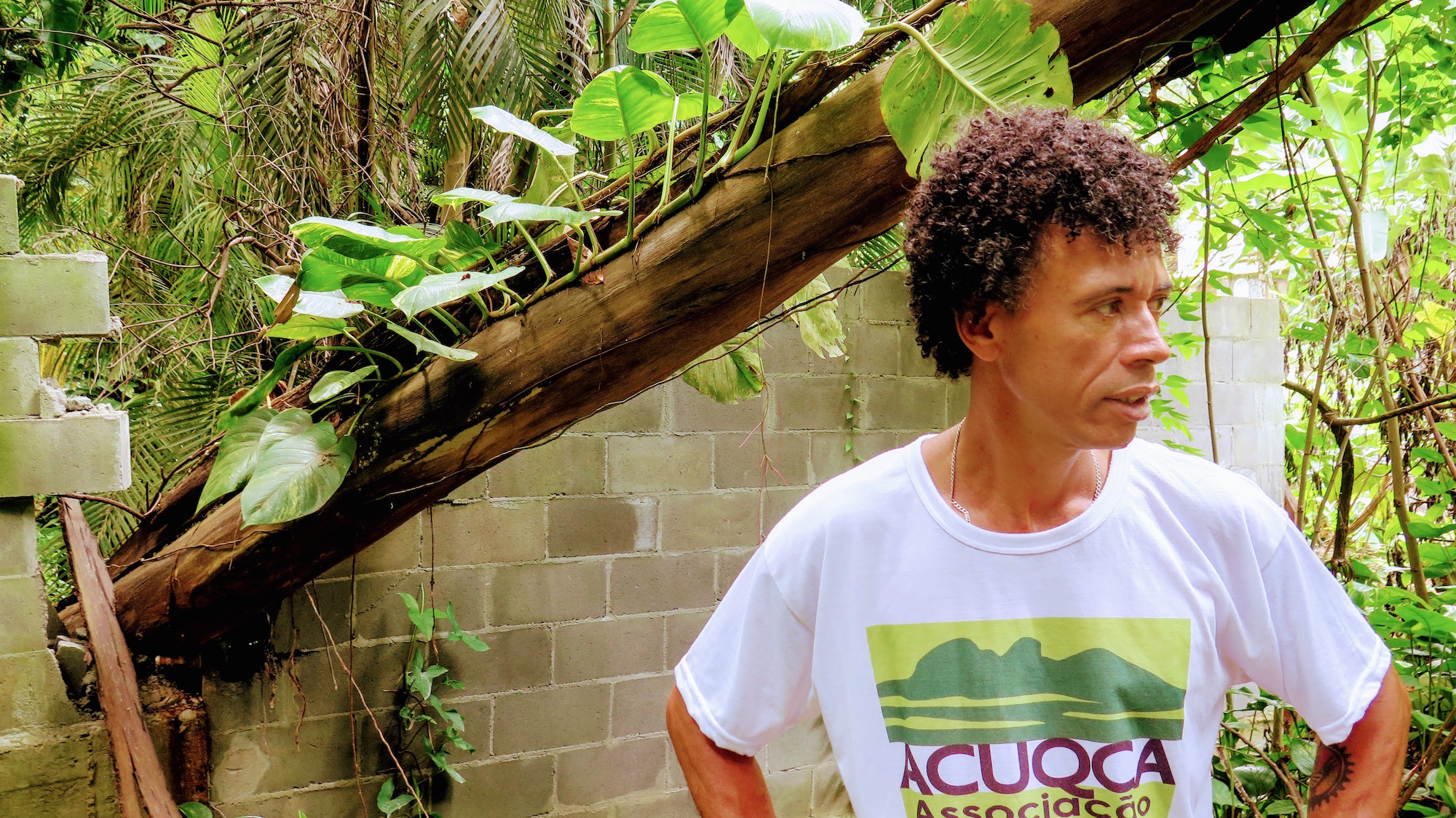 Walking down the trail, the SFN group came across a brick wall in the middle of the forest. Members asked Almeida where it came from, to which he replied: “The condominium’s construction didn’t just uproot trees—it destroyed our archaeological work, our ancestry. But when they finished, what did they do? They built a wall so that animals don’t invade the condominium.” Pointing to the environmental disturbance caused by the construction, SFN members responded by asking: “Who is invading whom?” Almeida ensured the group that the community is actively resisting: “The Berlin Wall fell and so will the quilombo wall,” Almeida said. To symbolically deconstruct the wall, Almeida hopes to “create a historical-environmental work across the wall with graffiti—practically a museum, depicting photos of enslaved Africans brought to Brazil through graffiti art.” 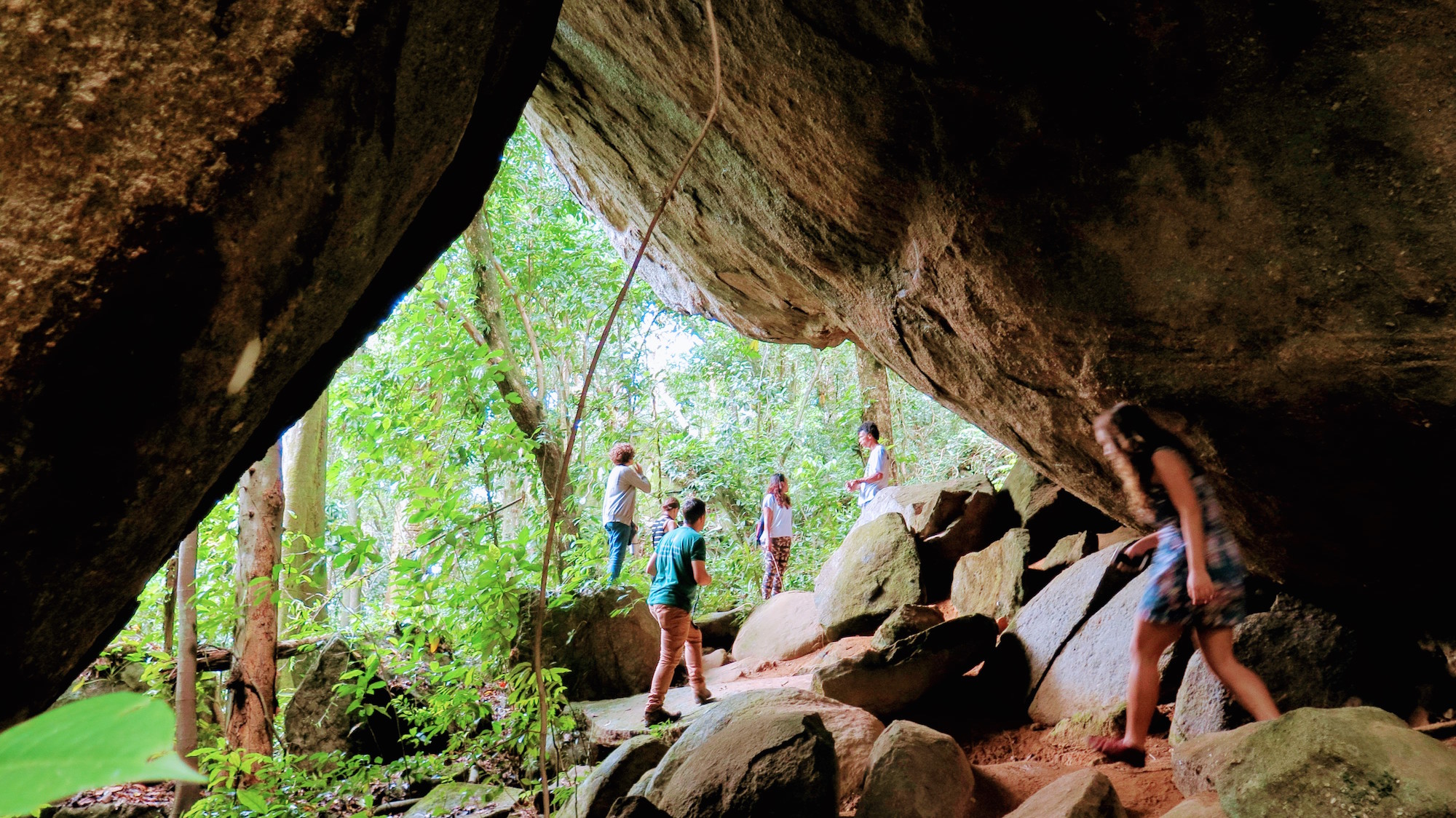 Continuing through the forest, the SFN group arrived at a refuge for the runaway slaves who historically inhabited the quilombo: a grotto with two open spaces where they would rest, prepare food, and bring other rescued slaves. Presently, Almeida explained that ACUQCA works to maintain the area clean by limiting or cleaning up religious offerings that may not be biodegradeable that are left on the trails or in the river by Afro-Brazilian religious practitioners. This challenge sparked a conversation with SFN members who have faced similar challenges. For example, Aline Barcellos of the Sepetiba Ecomuseum shared her group’s struggles with limiting the types of materials that can be brought to open spaces like local waterfalls and with ensuring that groups clean up after themselves. Barcellos explained that they have had to prohibit public access to some areas because of these issues. Almeida agreed, emphasizing the importance of ensuring that such non-biodegradable items and flammable materials are not left behind at natural landmarks. Most importantly, he identified the need for interfaith dialogue in order to preserve nature while respecting different groups’ spiritual practices.

In an enclosed space located a short climb from the grotto’s open area, Almeida asked the group to pause for a moment of meditation. “Close your eyes and feel the energy of this space,” he instructed. Almeida explained that “in various other quilombos, I have felt a very heavy energy of suffering… Here, I don’t feel any negative sensations or bad energy. There is always good energy here.” Reflecting on the challenges that ACUQCA has faced in recent years, Almeida explained: “There’s so much going on… [but I won’t] give up… my ancestry speaks louder.” Reflecting on the importance of nature in centering himself, Almeida said that he regularly visits the waterfalls in the forest and meditates. In his words: “Nature gives me strength.” 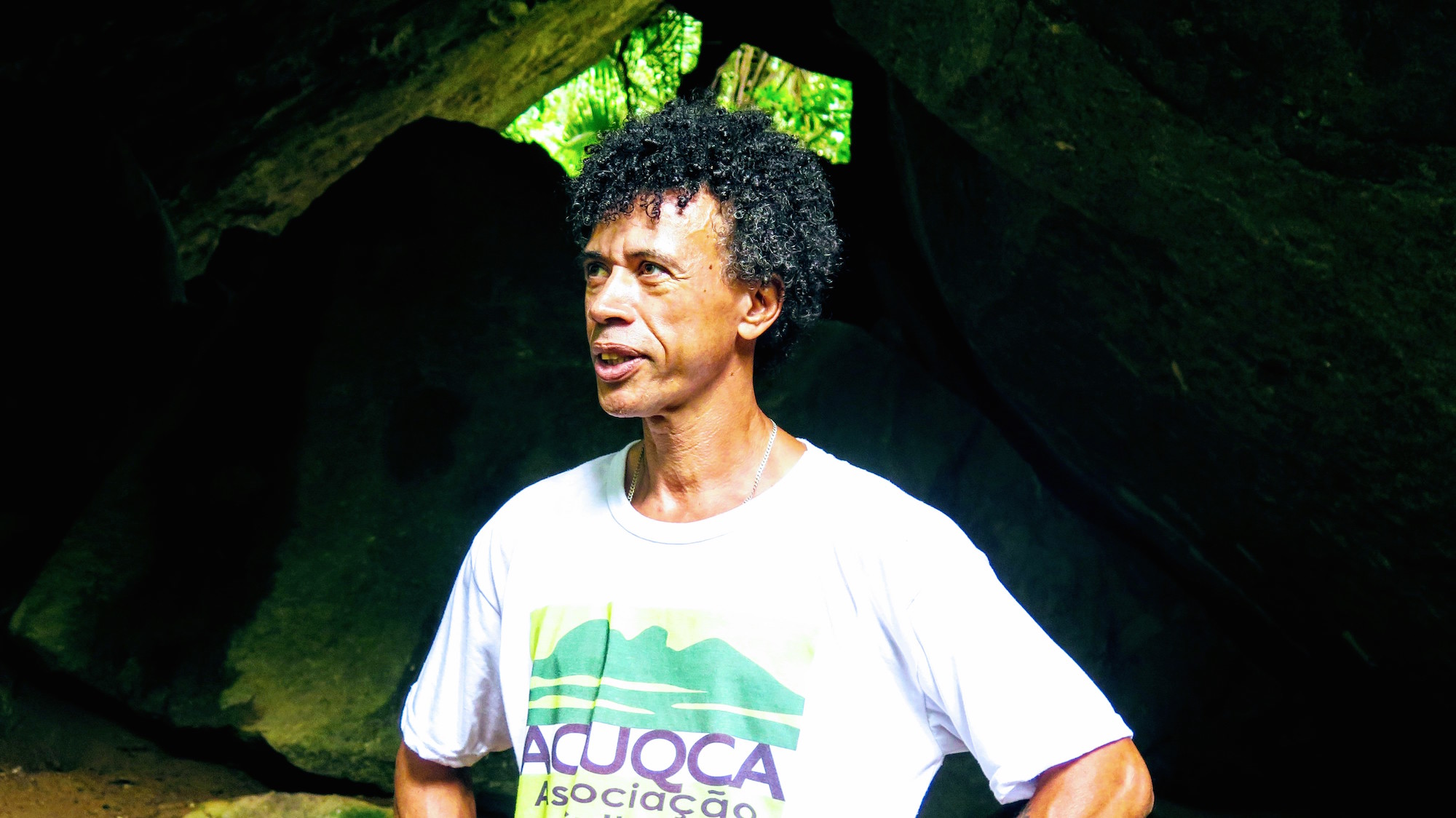 Returning from the elevated grottoes and winding rivers deeper in the forest, the final stop on the hike was an excavation site where archaeology doctoral student Sílvia Peixoto has helped ACUQCA find fragments of ceramics, tools, and plates used by enslaved Africans and indigenous peoples in the 16th and 17th centuries. The National Institute of Historic and Artistic Heritage (IPHAN) has certified the site as a place of cultural and historical significance, a development that Almeida is confident will help tell his community’s story—“a rich, untold story”—to the rest of the world. 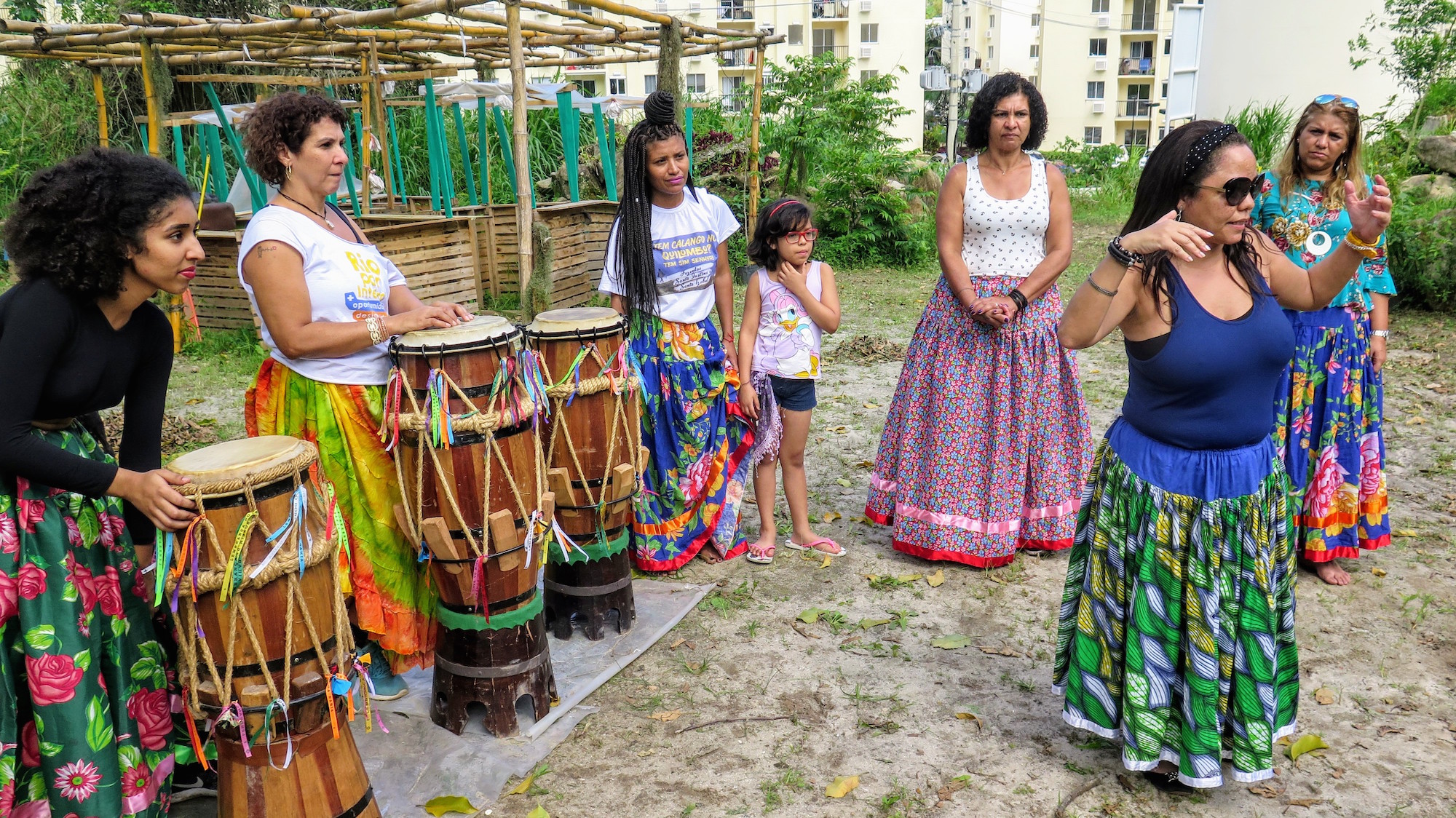 The SFN group returned from the tour of the quilombo‘s territory ready to feast on the feijoada lunch awaiting them. The Afro-Brazilian black bean and pork stew served with rice, collard greens, and fresh orange slices is Camorim’s specialty, regularly prepared by ACUQCA for public events. Before lunch, however, one more activity remained. Upon the group’s arrival, ACUQCA members gathered for a jongo circle, a traditional Afro-Brazilian dance that African slaves once used in order to communicate escape plans and even mock slave-owners through lyrics with multiple meanings. While SFN members learned the significance of jongo lyrics and the steps to the dance, ACUQCA members maintained the beat on a set of African drums.

As SFN and ACUQCA members shared stories over lunch and prepared for the afternoon visit to Alfazendo’s Eco Network in City of God, Almeida’s parting thoughts remained: “Fight always, resist, and never give up.”

View our photos from the visit to Quilombo do Camorim (or click here):