Focused on small, quality projects that leverage greater impacts, CatComm has been recognized numerous times for the care and quality we put into our efforts:

Winner of the American Society of Rio de Janeiro Ralph Greenberg Award for 2018: CatComm Executive Director Theresa Williamson was awarded the 2018 Ralph N. Greenberg Award from the American Society of Rio de Janeiro. Since 1977, the Society has given the Award to recognize persons “who have unselfishly contributed their time and effort for the betterment of the Rio de Janeiro community.” The award is named after Ralph N. Greenberg who, while serving as President of the Society in 1974, died in a tragic accident on his way to preside over a meeting of the Society’s Board.

Webbys Honoree in the “Best Communities” category 2016: RioOnWatch was in top 20% of websites and a winning honoree in the ‘community website’ category for 2016. 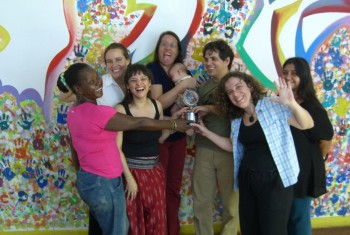 ‘Tech Award’ from the Silicon Valley Tech Museum 2006: CatComm’s Community Solutions Database, the first of its kind when launched initially in a rudimentary form in 2001, won us a Tech Award in the Equality category from the Tech Museum of Innovation in Palo Alto in 2006. As was written on the Tech Awards’ website: “Catalytic Communities has been slowly and carefully developing a unique Community Solutions Database online, a clearinghouse of thorough explanations of how communities solve their own problems, around the world. Now available in three languages, with over 120 projects, the database is growing quickly with recent improvements in the technology. Any community, anywhere on the globe, can add their local innovation to the CSD. This is one of the database’s unique characteristics: it is open to all who feel they are successfully addressing local challenges. Over 20,000 visitors monthly consult CatComm’s website for community-generated solutions.”