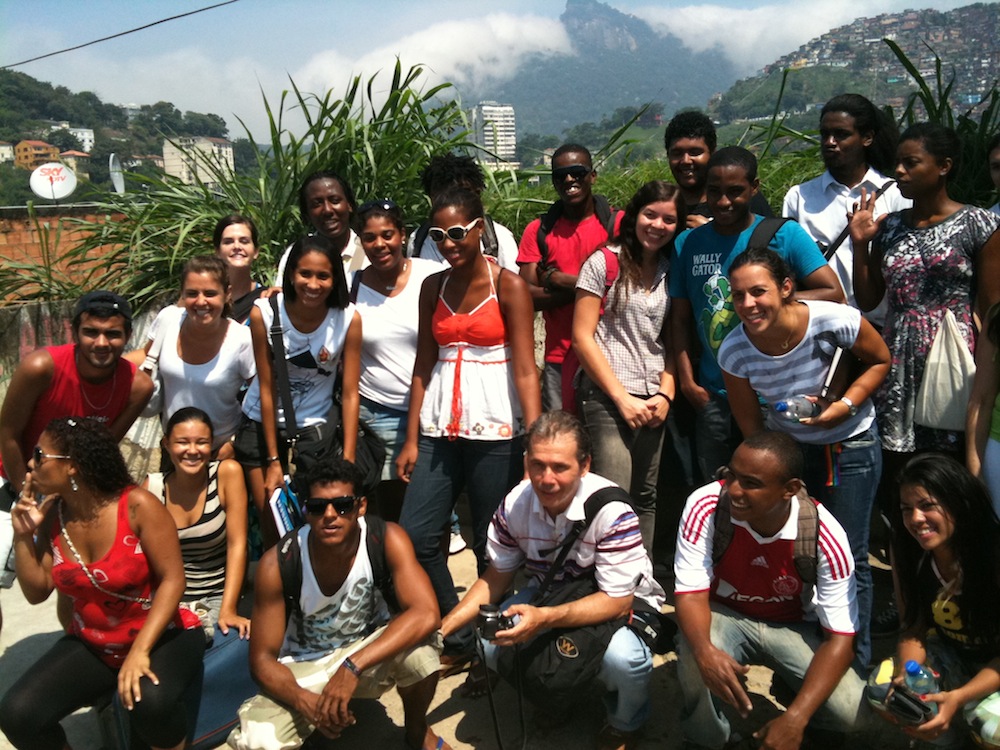 From 2008-2010, we carefully transitioned to CatComm’s second of four planned phases. We did this by researching, partnering, supporting, and transferring the transition of our Community Solutions Database to the WiserEarth platform, which we translated to Portuguese and trained Rio communities in; by carefully evaluating our Casa’s accomplishments with a community advisory board, and hosting a five-year celebration and closing of the facility; and by providing carefully designed Strategic Use of Social Media Trainings to over 180 community leaders from dozens of favelas located across Rio de Janeiro’s metropolitan region in 2010, introducing them to a range of platforms from Facebook and Twitter to Flickr, YouTube and WorldPress.

At this point we also revisited our early mission. Our work had evolved based on the conditions and needs of Rio’s favelas, our own learning about how to effectively serve them, and the global growth of informal settlements. As a result, Catalytic Communities’ updated mission became (and continues today to be) to create models for effective integration between informal and formal settlements in cities across the globe, based on the experience of Rio de Janeiro. We develop and implement innovative and inexpensive (i.e. easily replicable) hyperlocal programs with Rio’s favelas, making our approaches publicly accessible to be taken up by other organizations.

In addition to the technological changes cited above which we identified in 2008, another major shift occurred at that time: Rio de Janeiro’s economy began to grow again, new politicians took office, the city was selected to host the 2016 summer Olympics, and the favelas that had been kept chronically marginalized and underserved over a century were now told they would finally be receiving long sought-for investments from federal, state and local programs. And a final shift: with these changes to Rio came the global spotlight—we learned early on that everyone from freelance journalists to global media outlets were moving to Rio, establishing themselves for the media-filled years that would come in the lead up to the 2016 Olympic Games.

In our customary experimental fashion, we launched RioOnWatch—Rio Olympics Neighborhood Watch—initially as a collective blog that community leaders taking our 2010 social media trainings and 2011 community journalism trainings would casually contribute to, offering an opportunity for them to develop skills with WordPress. But by networking a diverse subset of favela organizers on social media strategically through our trainings, and given our large network and reputation from the development of the Community Solutions Database and Casa community technology hub, we began, already within one year of Rio being announced 2016 Olympics host, to receive alerts from communities facing severe and questionable issues with regard to public sector investments across the city. From forced evictions to police violence, we found ourselves in a position to bring global attention to traditionally isolated favela voices, at a time when the world would be paying more and more attention to Rio de Janeiro. This would offer Rio’s favelas a crucial and once-in-a-lifetime opportunity to shift the narrative that had for so long kept them from realizing their potential.

In late 2010 RioOnWatch was the first platform to report on forced evictions in Rio’s favelas in the name of mega-events, followed by our video-reporting in early 2011 which caught the attention of the Associated Press, leading eventually to a vast number of major international and domestic news outlets to use RioOnWatch as a key source of favela information, story ideas, and community contacts. This put us in the fortuitous position of helping set the global debate on Rio de Janeiro and its favelas during these critical pre-Olympic years.

RioOnWatch ultimately became a go-to news source for community organizers in Rio and around the world, journalists, researchers, urban planners and a variety of other groups interested in equitable urbanism, mega-events and human rights, and grassroots solutions. It is the world’s first hyperlocal-to-global news platform, strategically taking traditionally isolated communities and making their stories, personalities and experiences globally accessible and followable on a daily basis, thus forcing local media to pay attention and local authorities to change their behavior.

We also set out to provide a number of tools to hasten improvements in coverage beyond RioOnWatch. These included: our RioONWire favela news wire; World Cup press resources; Olympic Resources for Journalists including story recommendations, community contact lists and maps; regular analysis of the Best and Worst reporting on favelas; and alternative press conferences, reality tours, and one-on-one support for journalists covering Rio. Over time this multi-faceted communications strategy resulted in thousands of reports in dozens of countries supported or facilitated by the CatComm team. Quite a few of these also quoted the organization as an expert on Rio, urban planning and favelas.

In support of this program to change the media narrative on favelas, we undertook an annual Favela Perceptions Survey and monitored international media about favelas. As 2016 came to a close, we finalized, published and launched our 8-year longitudinal analysis of how media coverage did and did not in fact change during those critical years in a report tilted “Favelas in the Media: How the Global Narrative on Favelas Changed in Rio’s Mega-Event Years” (and a more detailed comparison across eight major global outlets) where we tracked and provided feedback to international media outlets on the qualities and deficiencies of reporting with regard to Rio’s favelas. This report has been cited by Vice and the Knight Center for Journalism in the Americas, among others.

The image of favelas portrayed in the media matters because productive reporting enables productive policies, whereas lazy journalism can perpetuate policies that treat favelas as “the dark side of the city” to be removed, ignored, or dealt with through violence.

Also related to the Olympic legacy, Executive Director Theresa Williamson published a book chapter, “Not Everyone Has a Price: How the Small Favela of Vila Autódromo’s Fight Opened a Path to Olympic Resistance,” in Andrew Zimbalist’s latest book Rio 2016. She was also interviewed by NPR about the Vila Autódromo story.

Alongside promoting favela perspectives to a broad international audience, CatComm has worked to stimulate awareness and dialogue within favelas themselves, partnering with community organizations to strengthen local resistance to increasing threats such as eviction, police violence and gentrification. For example in 2013 and 2014 CatComm partnered with the Vidigal Neighborhood Association to host a series of workshops and debates on gentrification in the community which were widely attended by residents and covered in the local and international press.