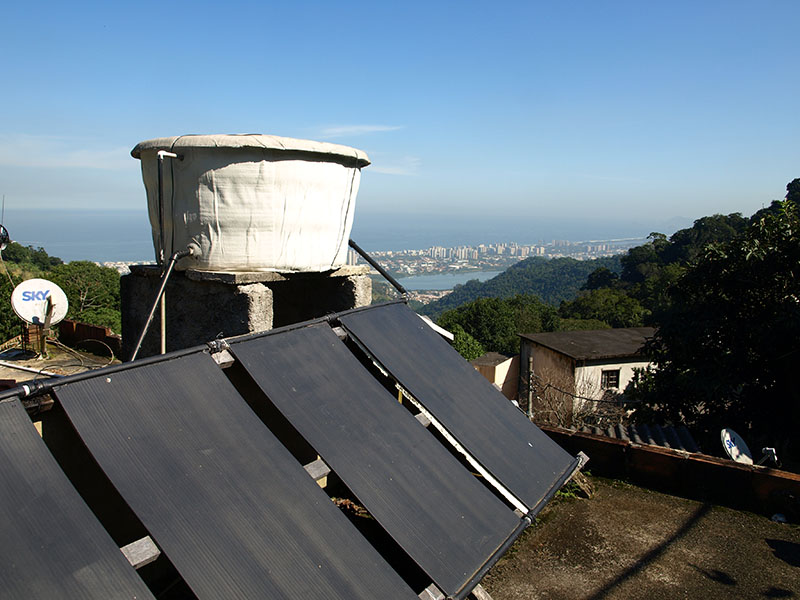 In July 2013 Catalytic Communities partnered with Solar Cities Solutions, a US-based NGO that has implemented community-based sanitation systems around the world, to bring this technology and training to favelas in Rio de Janeiro. Beginning with a test site with Architects for Humanity at a school in Niterói, the program intends to serve sections of four favelas by June 2014: Morro do Bumba, Vale Encantado, Morro do Alemão and Muzema.

The program is bringing specially-designed molds from China that will allow for the ultimate building of 2000 biodigester systems across favelas in Brazil. Each site will take one week to build with leadership and participation by community residents, Solar Cities, Architects for Humanity and CatComm. During that week future beneficiary communities and those interested in implementing biodigesters elsewhere are invited to participate in the training, in this way allowing the program to expand effortlessly as future communities receive training during the installation of prior programs and thus are better prepared to install the technology in their own communities. Each community will have a carefully-designed system based on local conditions and needs.

A biodigester is a natural system that turns food waste and sewage into usable energy by emulating the body’s natural digestive process. Biodigesters are essentially tanks, which can be made out of cement or plastic, that hold food scraps and sewage. Bacteria in the tank consume these products that we consider as waste. In the process of bacteria consumption, biogas is produced and trapped. By using a simple hose, this biogas can be used for energy to power things like stoves and generators. The rest of the material turns into fertilizer. The technology is ancient and has been used around the globe for thousands of years. It is a simple, sustainable solution that can be produced at different scales and at a low cost. It turns what was once considered waste into fertilizer and clean, renewable energy, helping to reduce the amount of waste we produce as well as cleaning sewage before it enters the environment. As a result, through the use of biodigesters a community can effectively tackle three issues: solid waste, sewage, and the need for cooking fuel.

CatComm and its partners are delivering this workshop initially in four communities across the city, with the opportunity for all interested communities to participate in the trainings. This workshop may be delivered as follow-up to priorities established by communities during our Community Planning Workshop. The hope is that this program will encourage the spread of biodigesters and community sanitation throughout Brazil.