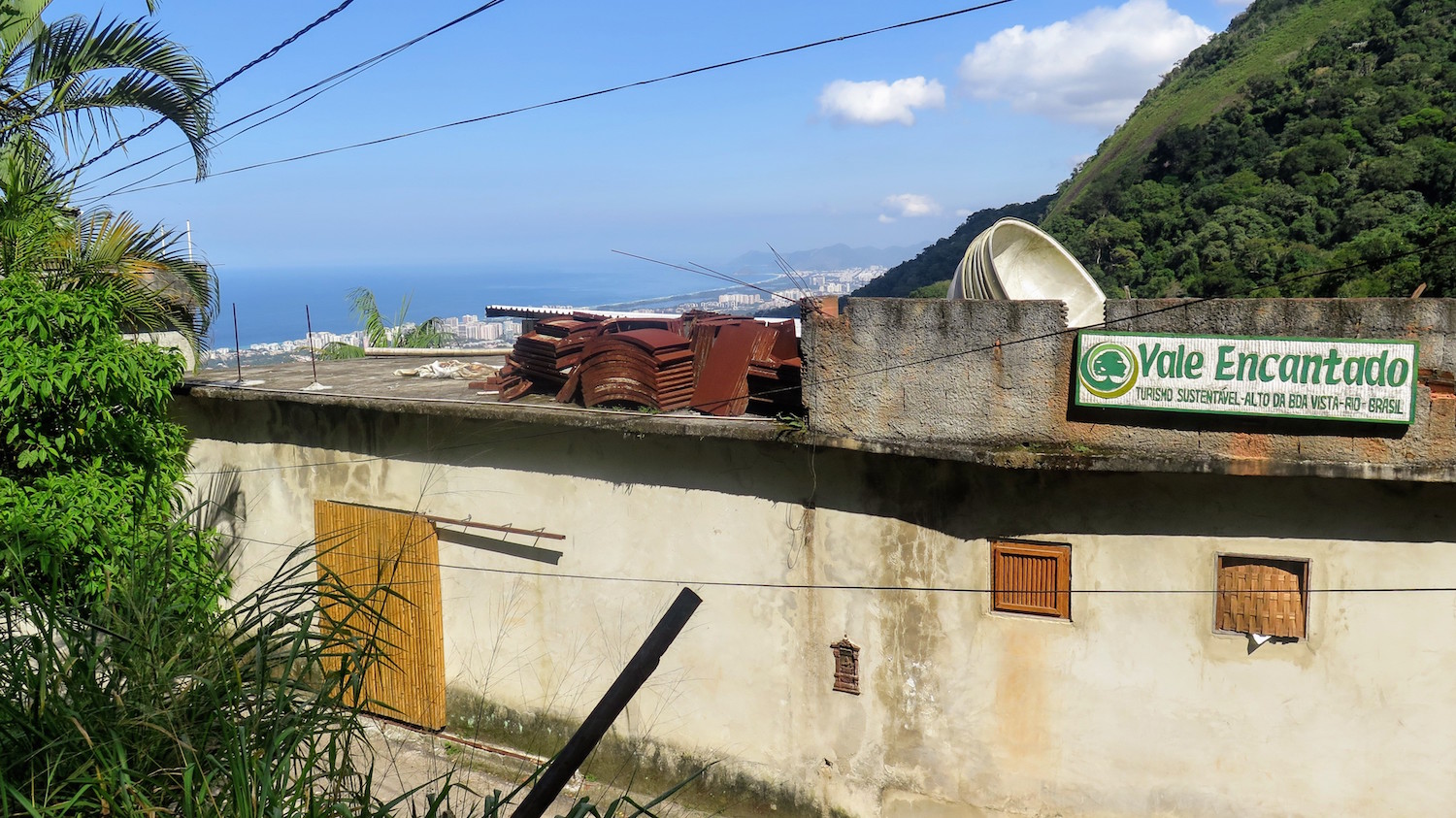 The Morning of the Second Exchange: Vale Encantado

On the morning of September 8, the second Sustainable Favela Network (SFN) exchange began in the community of Vale Encantado—a small favela nestled in the Alto da Boa Vista neighborhood, located in the middle of the Tijuca National Forest, one of world’s largest urban forests. The exchange brought together representatives from community-based organizations that promote ecological sustainability and social resilience in City of God, Morro dos Prazeres, Quilombo do Camorim, and Sepetiba—along with Catalytic Communities team members and collaborators (including environmental engineers and public defenders). Originally founded by three families who worked on coffee plantations in the area in the 1800s, today, the community is comprised of 25 homes and 116 residents. Vale Encantado is best known for its work as a model of sustainability in favelas.

Otávio Barros, a fifth-generation resident and the president of the Vale Encantado Residents’ Association, launched the community’s sustainable tourism project in 2005. Since then, the project has grown into a cooperative that leads hikes and tours in the forest and manages a restaurant, employing residents who design and serve unique local dishes. In recent years, Vale Encantado has developed a biosystem—a sustainable sewerage system that treats the community’s sewage through an on-site biodigester and natural filtering system. Five homes are already connected to the system, and a separate biodigester uses food waste to provide biogas to fuel the cooperative restaurant’s kitchen. 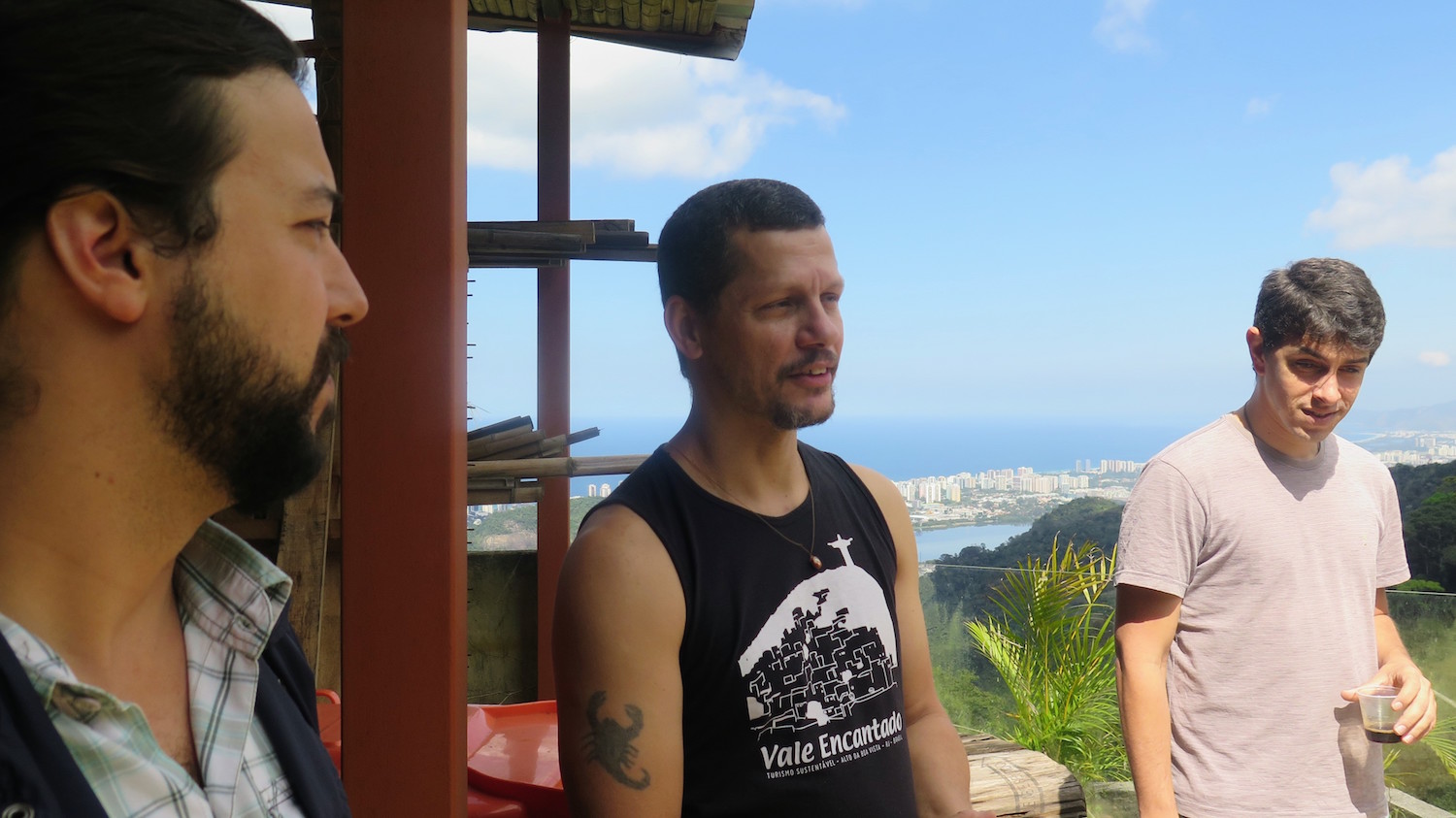 Saturday’s meeting began with a tour of Vale Encantado along a nature trail in the forest that surrounds the community. The group paused at a lookout point to learn about eviction threats facing Vale Encantado in recent years. Barros discussed a lawsuit brought by the State Public Prosecutor’s Office against the City of Rio de Janeiro in 2006 that accused the city of harming the environment by allowing the “favelization” of protected areas bordering the Tijuca National Park. Over the years, favela residents in Alto da Boa Vista have mobilized to show that their communities do not pose a risk to the surrounding forest, and rather work to preserve the natural environment. 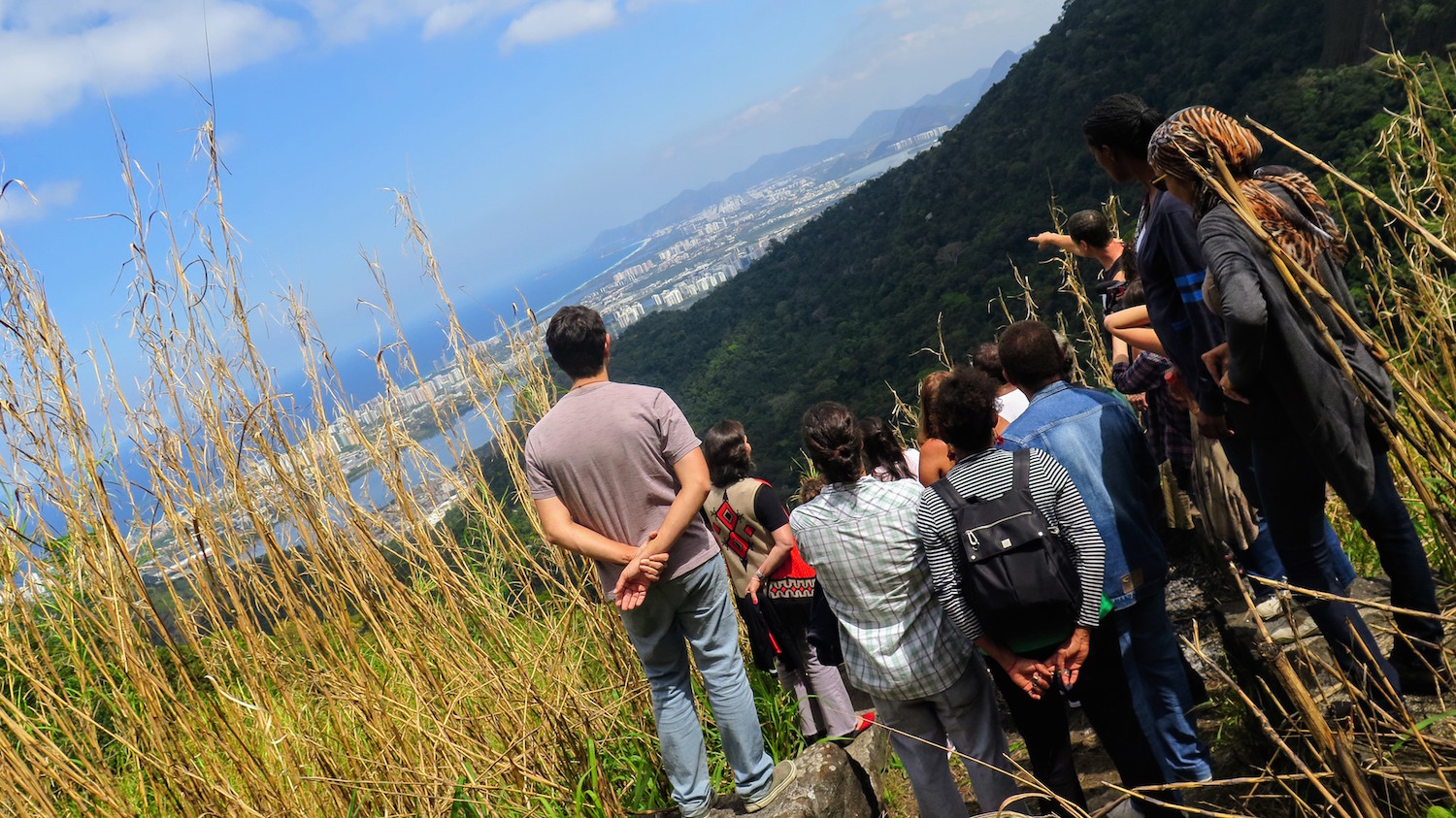 A key part of this mobilization is the development of a sustainable sewerage system in Vale Encantado. In the words of Barros, this project is “precisely to show that not all communities participate in the environmental degradation [process], as [the State Public Prosecutor’s Office] says is happening.” At the exchange, two environmental engineers and sanitation collaborators, Tito Cals and Leonardo Adler—who have worked with Vale Encantado to develop the biosystem since 2013 and now run the Environment in Motion Institute—joined Barros in showing the group the two biodigesters built to sustainably treat the community’s sewage. A previously-built smaller biodigester, which generates biogas for Vale Encantado’s kitchen using organic materials such as leftover food, was developed and donated to Vale Encantado by the NGO Solar CITIES and was what initially brought Cals and Adler to work as volunteers in its construction. This initial connection was made by CatComm prior to the establishment of the Sustainable Favela Network. 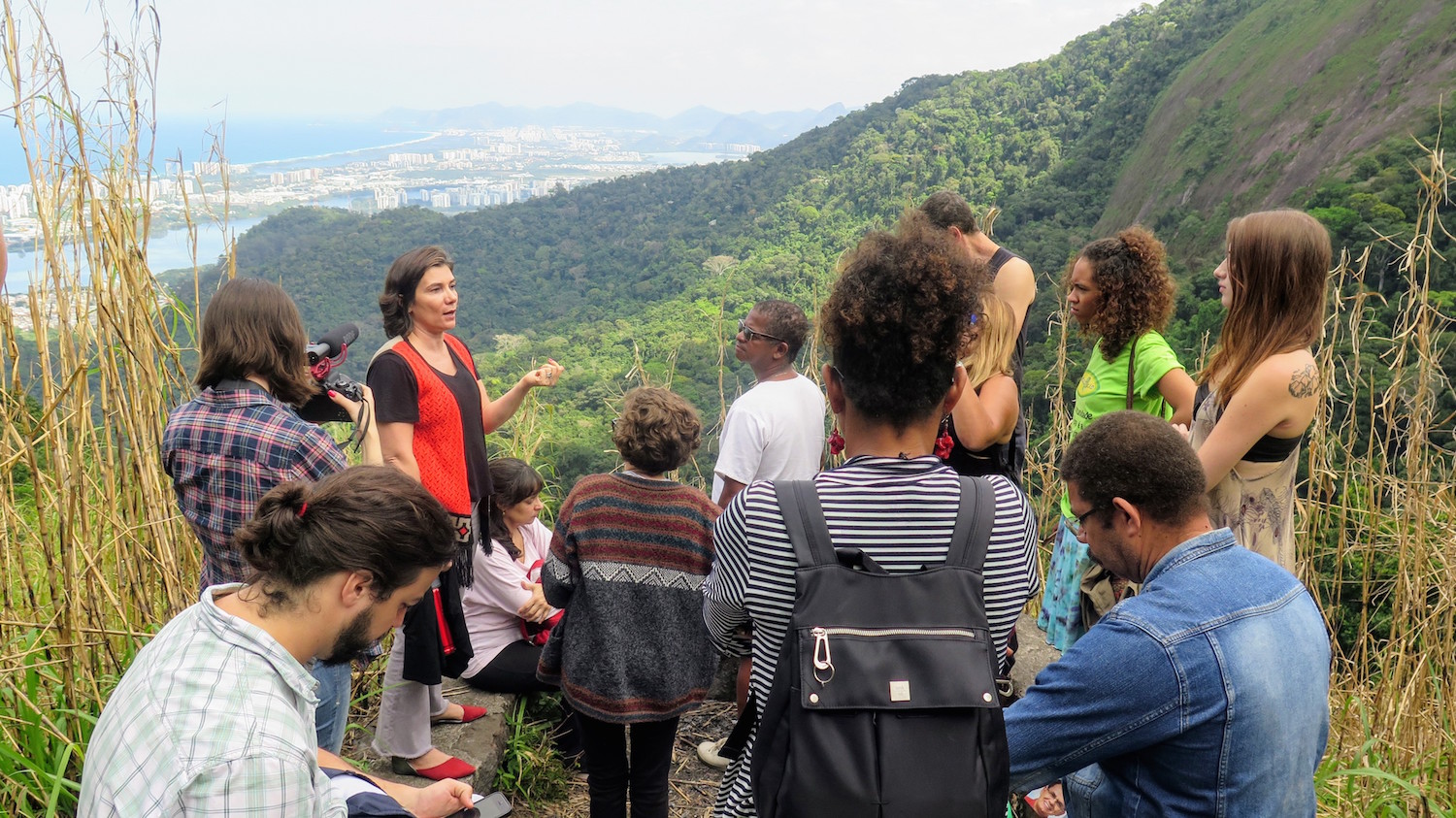 Adler described their excitement after completing the kitchen biodigester: “We said, ‘Awesome, we finished a really cool project… solving a real problem.’ That was why we returned to the Pontifical Catholic University (PUC-Rio), where we studied, and together with the civil engineering project, applied for project funding to develop [the larger sewage biodigester].” Referring to the eviction threats that Vale Encantado and other communities in the Tijuca Forest have faced in recent years, public defender Maria Lúcia Pontes of the Land and Housing Nucleus of the State Public Defenders’ Office (NUTH), also present at the exchange, noted: “These kinds of projects are so important when it comes time to legally defend the community. This is why community partners must understand that your work is of the highest importance for their defense, to demystify and deconstruct this idea of the community as a polluter.” In response to Pontes, Adler added: “We heard from one resident who, when she came to visit [the biodigester], said: ‘Now it’s the rich [from neighboring condominiums with no sewage treatment] who are polluting the forest—and the poor who are cleaning it up.’” 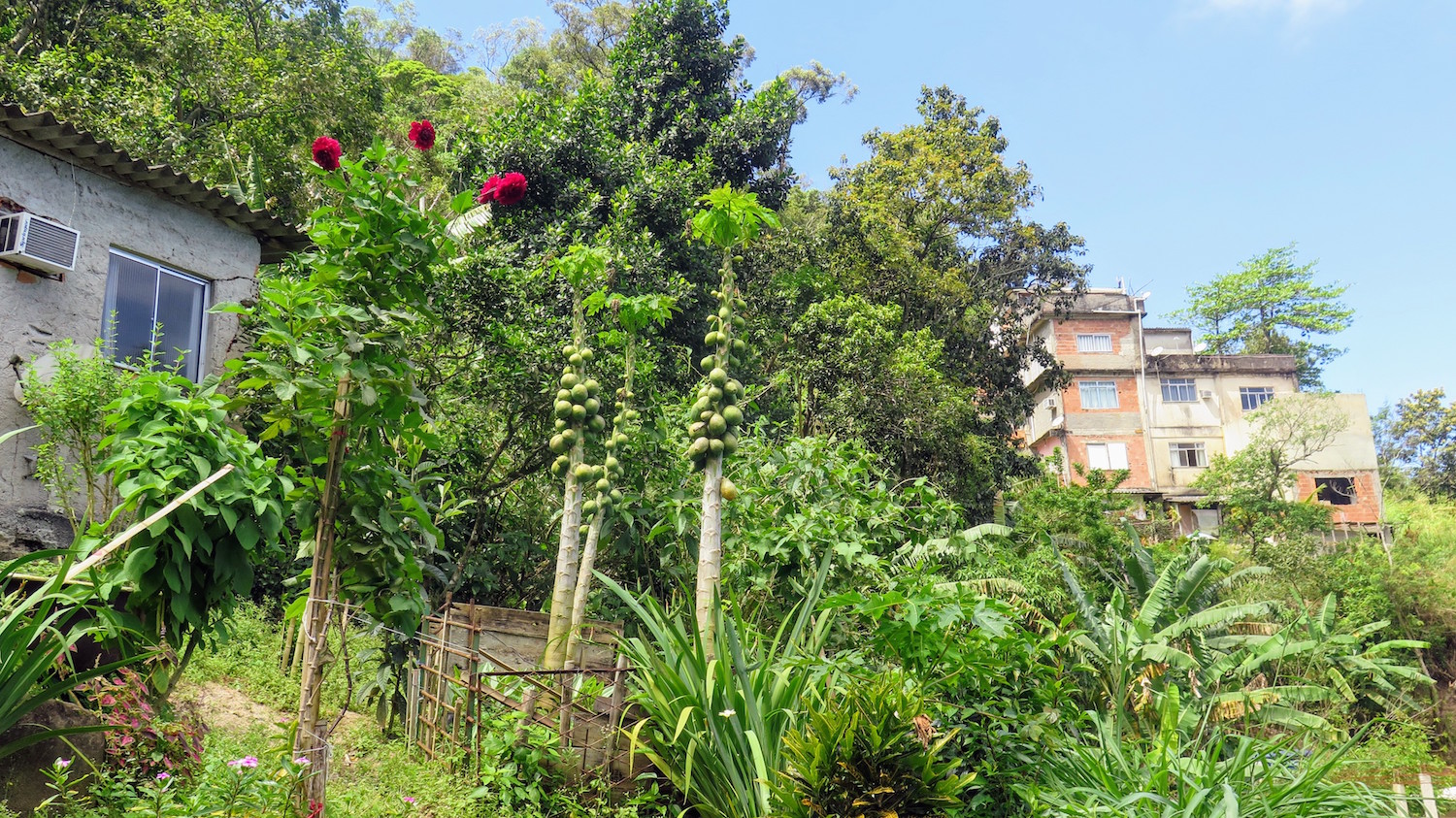 Following the tour of Vale Encantado, Barros, Cals and Adler presented exchange participants with an overview of sustainable sanitation projects, describing sewage treatment as “one of the greatest challenges for the city of Rio and for the entire country.” In describing the massive treatment plants that the City has built to respond to this challenge, Cals and Adler explained, “It is not just delayed public policy, but also elitist public policy… Those without money are the last people to receive services according to the government’s logic.” While recognizing that some spaces require large, centralized sewage treatment plants, the engineers’ goal is to show that a centralized system is not the only available option. They believe that communities need to consider their own needs, costs, and capacity for maintenance in order to choose a sanitation system that best works for them. In the realm of ecological sanitation systems, this may mean using a biodigester, a vermifilter (which uses earthworms to replicate natural treatment processes), or a so-called ecological septic system that uses banana trees to treat waste. Cals and Adler presented examples of ongoing ecological sanitation projects, specifically describing the construction of the biodigesters in Vale Encantado and explaining how they function. 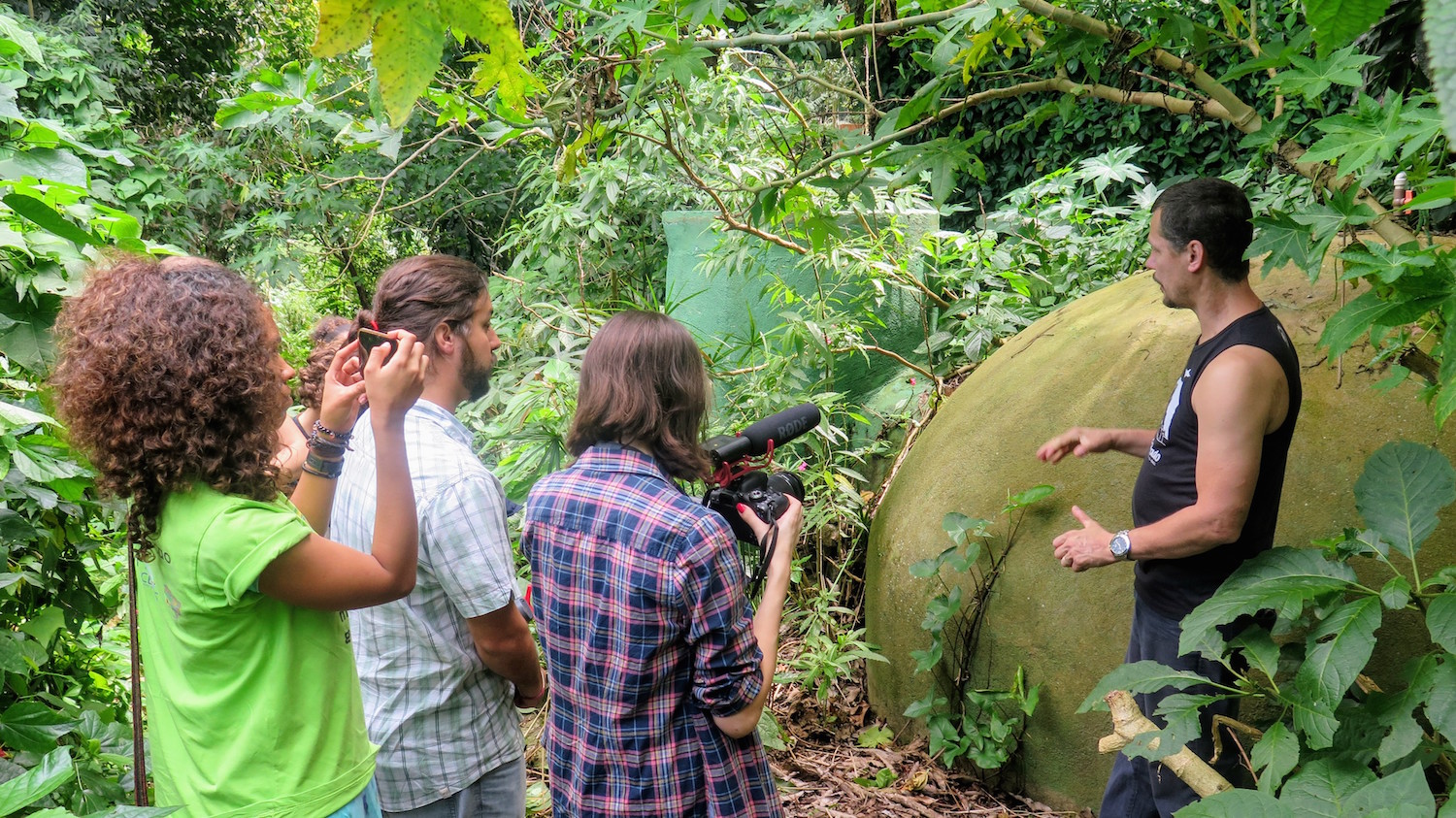 Describing ecological sanitation solutions as “a very large paradigm break,” Cals and Adler concluded their presentation with a story, emphasizing the importance of an “ecology of knowledge” that values traditional wisdom and grassroots, community knowledge. During the biodigester’s construction, they explained, the team knew that they would need concrete but could not figure out how to transport it into the middle of the forest. Neither the engineers nor the architects on the team arrived at the solution. Rather, it was Barros—a resident—who suggested making the concrete on-site, using the same technique that he had used to construct his own house. Community members play an integral role in the development of ecological sanitation solutions; Cals and Adler describe their own role as simply “sharing the message of sanitation and possible solutions.” 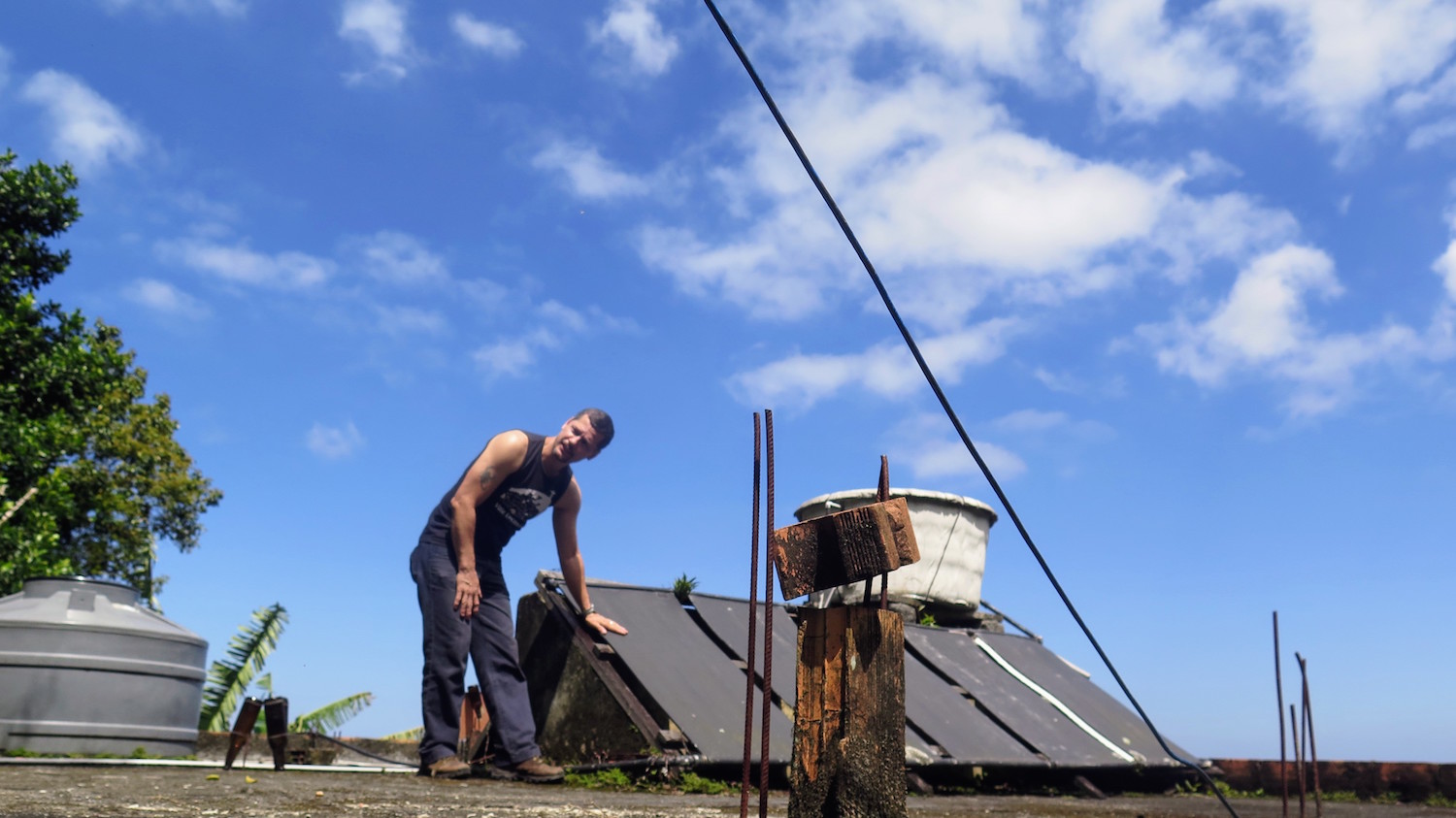 Challenges and Next Steps for Vale Encantado

Over lunch at Vale Encantado’s sustainable restaurant, SFN members discussed Vale Encantado’s plans for the future and major challenges. Currently, Barros says he is focused on completing the rest of the community’s biosystem, as well as increasing residents’ awareness of the system. To engage residents in separating their trash and bringing biodegradable waste to the restaurant’s biodigester, Barros came up with the idea of providing products from the kitchen, such as fresh bread, to those who deliver their food waste. To this end, Barros explained that the community needs to remodel the kitchen in order to meet the growing demand both for its products and for employment. If the kitchen is capable of producing food for up to fifty people at a time, it can remain open at regular times without requiring prior reservations (as must be done today) and ensure permanent employment for residents who currently travel long distances for work. “The renovation is crucial not only for developing the work we do, but also for generating jobs for women in the community,” Barros said. 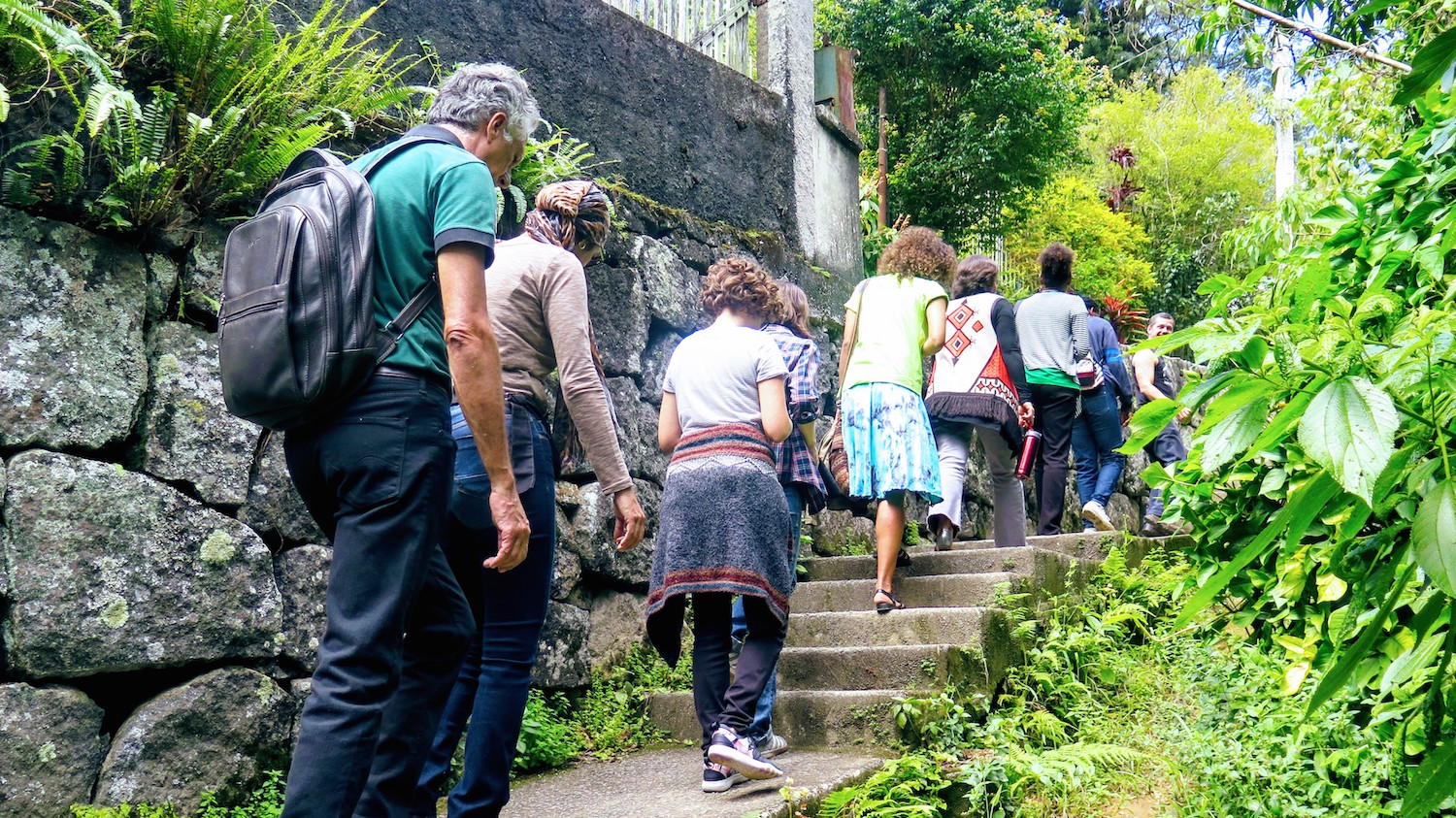 The other major challenge currently facing Vale Encantado concerns the structure of the community cooperative, which they are considering restructuring into an NGO or a business—each of which has its advantages and disadvantages. This ignited a conversation among SFN exchange participants about the legal structures that best meet the needs of their respective organizations. The conversation grew into a brainstorming session for Vale Encantado. Carlos Alberto Oliveira from Alfazendo in City of God emphasized the importance of systematizing their knowledge and creating a strategic plan to forecast their actions, partnerships, and costs. Helio Vanderlei of Onda Verde in Nova Iguaçu—host of the first SFN exchange—suggested Barros and his neighbors partner with relevant departments at PUC-Rio, and local businesses that may be willing to contribute to ongoing projects. Ideas were also shared about effective signage that would support visitors in quickly understanding the project, its successes to date and plans for the future.

Full of new ideas, banana hearts and jackfruit stew, SFN participants traveled by bus for fifty minutes, all the while within the city of Rio de Janeiro and stopping at no traffic lights—through the massive urban Tijuca Forest—to Morro dos Prazeres, a favela located atop the historic Santa Teresa neighborhood near downtown Rio, to continue the day of exchange. Check back tomorrow to read about the second part of the day.