Favela as a Sustainable Model

Catalytic Communities is committed to promoting, fostering and developing the dialogue surrounding the sustainable development of favelas and other informal communities worldwide based on the qualities inherent in such communities.  We initiated this dialogue in June 2012, with sustainable development at the center of global discussion at the Rio+20 UN conference, presenting “Favela as a Sustainable Model,” a short film contributing to a growing global dialogue around informal settlements, particularly consolidated ones like those in Rio, and the potential lessons they offer towards a sustainable urbanization worldwide. The film premiered at the Rio+20 People’s Summit and was featured in the Summit’s Film Series.

More recently, in August 2014, CatComm and partners launched the idea of LEED-Up at the São Paulo Greenbuilding conference. LEED for Upgrading Informal Settlements hinges on the idea that we should be upgrading favelas–supporting their continued development by providing those missing public services–in a high-quality, community-based and -led, and sustainable way. 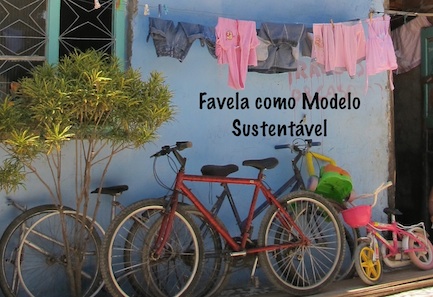 CatComm Founder and Executive Director Theresa Williamson explains: “Over the years our work in Rio’s favelas has exposed us to a wide range of qualities in these communities that are typically associated with sustainable, or resilient, neighborhoods. We decided to film a documentary with footage recommended by Rio’s community leaders, to shed light on the aspects of favela life that the broader society could and should model in terms of sustainability.”

From the largest informal settlement in Latin America to a small community deep in the Tijuca forest, the people and projects featured in the film show the creative solutions and common values that contribute to these communities’ sustainable development. “We’ve realized the formidable obstacle posed to Rio’s favelas’ development simply by the stigmas associated with these communities. And not one of these stigmas is well-founded,” says Williamson.

CatComm has also launched the Facebook page Rede Favela Sustentável (Sustainable Favela Network) as a community space to exchange information and experiences with the objective of recognizing and strengthening the idea of favelas as a sustainable model. The page is utilized to stimulate and grow the debate, sharing best practices, innovations, community experiences and events news.

For more information and articles on the projects and communities featured in the “Favela As A Sustainable Model” film visit RioOnWatch and search for the community of interest. Theresa Williamson is also available upon request to deliver our talk: “Favelas at the Vanguard: Rethinking our Assumptions in Sustainable Development.” To join in the debate around sustainability in Rio’s favelas, fan us on Facebook, follow us on Twitter, or join our mailing list for monthly updates.