Over their 50 years, Community Land Trusts have become a global instrument to realize the right to housing, and their potential is increasingly recognized in Brazil. The São João de Meriti Master Plan is the first law in the country to regulate the Community Land Trust. This legal provision is an important step in promoting the model’s adoption by urban communities. A Portuguese-language live event will be held online on September 1 for those who want to learn more.

On August 15, 2022, the São João de Meriti Municipal Register released the city’s new master plan—the major piece of municipal legislation that will guide urban development for the next ten years, establishing objectives and guidelines for the actions of public authorities. A new feature stands out in the legislative text: the inclusion of an urban instrument thus far inexistent within the Brazilian legal framework: the Termo Territorial Coletivo (TTC), the Brazilian version of the Community Land Trust (CLT). The Brazilian CLT has been designed to be applied in favelas as a model of land titling that promotes collective land management, protects a community’s right to remain in its territory, promotes affordable housing and stimulates local development. São João de Meriti’s innovation in including this instrument in its master plan is an important step towards achieving the right to dignified housing in Brazilian cities.

According to Theresa Williamson, executive director of Catalytic Communities (CatComm), the organization that manages the Favela-CLT project:

“The approval of the first law in the country that regulates the CLT is a determining factor for CLTs to truly be established in Brazil. With this pioneering step taken by the municipality of São João de Meriti, a Favela CLT is no longer a dream. It’s now only a question of time until we establish the first Brazilian CLT!”

The Community Land Trust and the Fight for Affordable Housing 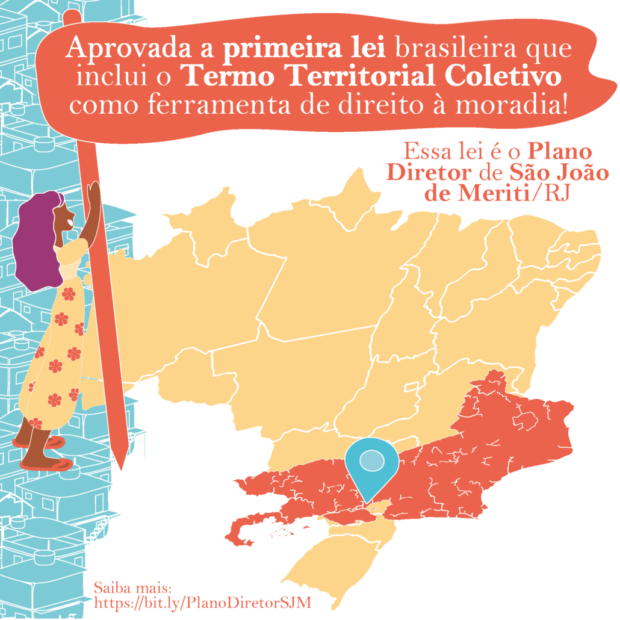 Used the world over to guarantee affordable housing, the CLT model of collective land management has become known in Brazil as the Favela Community Land Trust (F-CLT)*. Born in the context of the U.S. civil rights movement of the 1960s, the model spread rapidly across the country where there are now hundreds of CLTs in operation, both in urban and rural areas. Over the last few decades, CLTs have spread all over the world at an increasing rate in countries such as Canada, England, Belgium, France, Australia, Kenya, and Puerto Rico.

In 2017, the Community Land Trust was included in the UN’s New Urban Agenda—a document produced at the UN Habitat III Conference which established global guidelines for the good governance of cities—as an inclusive and sustainable housing model. This was an important step for CLTs to be recognized as a housing solution for low-income populations that should be supported by UN member states.

CLTs work by separating the property over land from that over buildings. The land is owned by the community as a whole—represented by a nonprofit community organization—while the houses and buildings remain individually owned, rented or leased through surface rights deeds. In the CLT, the land cannot be sold and is permanently taken off the speculative real estate market with only surface rights being able to be bought or sold. This arrangement balances the individual and collective interests which exist in any community, and keeps the cost of housing accessible to low-income families since the location cost (represented in the land’s market value) is removed from the equation.

Community Land Trust experiences the world over have demonstrated their effectiveness in guaranteeing a greater degree of tenure security, ensuring residents remain on their land, preventing forced evictions and gentrification. In addition, the CLT’s commitment to a collective management model helps strengthen the community’s control over the land and stimulates resident-led local development. In many localities, we observe how communities have flourished after CLTs were set up, with residents taking charge of their own development and successfully achieving their right to housing.

Due to its highly flexible nature, CLTs can be used in very different contexts. In Latin America, we have a successful case of a CLT applied to an informal settlement in San Juan, Puerto Rico. The Fideicomiso de la Tierra Caño Martín Peña is a model of community development and resilience, showing the potential CLTs have for regularizing informal settlements.

In Brazil, the Community Land Trust is still a new model although it has been gaining growing public interest. The Favela Community Land Trust Project has been working since 2018 to make the application of the model viable in the country, spreading knowledge, exchanging ideas with numerous organizations and working with Rio de Janeiro favelas that have shown interest in becoming pilot projects. It is truly a question of time for the first CLT to be set up in the country!

The Importance of the Master Plan for Urban Management

The master plan is the basic instrument used for the urban planning of Brazilian cities. Established in the 1988 Federal Constitution and in the City Statute, it is a mandatory requirement for cities with over 20,000 inhabitants and must be reviewed every 20 years. Master plans establish the guidelines for urban policies, setting goals for the development of cities and listing the tools needed to reach them.

Building and reviewing a master plan should be a democratic process, with the extensive participation of society. Every ten years, an evaluation of urban growth in that period is made and the plan is reviewed with new objectives and strategies for urban management being adopted. So, when time comes to review the master plan, citizens mobilize to define the future of the city where they live.

In addition to defining the goals for urban development, a city’s master plan must list the instruments needed so they can be reached. It’s pointless making promises without the practical means to make them happen. With regard to guaranteeing dignified and affordable housing for all, São João de Meriti innovated by including the Community Land Trust in its list of urban policy instruments.

Outlined in Articles 341-345 of the plan, the CLT is recognized as an instrument to guarantee access to land and housing and can be used along with other urban policy measures, particularly Areas of Special Social Interest (AEIS). Thus, the city of São João de Meriti has another instrument to realize its population’s fundamental rights, especially adequate housing and the right to the city.

The Spread of CLTs In Brazil

The Community Land Trust first arrived in Brazil in 2018 through a series of exchange workshops organized with the Puerto Rico CLT by Rio de Janeiro-based nonprofit Catalytic Communities during a very complicated period regarding the guarantee of tenure security for favela residents.

Between 2009 and 2014, approximately 20,000 families were forcibly evicted (80,000 people) in Rio de Janeiro based on the claim that infrastructure works were needed to prepare the city for the World Cup and Olympic Games. At the same time, Rio experienced one of the highest cost of living increases in the world, making basic living costs, including housing, extremely high for a large part of the population. Thus, Community Land Trusts were introduced into the public debate as a solution that protects communities both from State enforced evictions and real estate speculation.

The first Public Hearing on Community Land Trusts was held by the Rio de Janeiro City Council in September 2021. This was an important event in which the model was discussed with councilors in an institutional context. The city of Rio de Janeiro has included the CLT in the bill that will update its own Master Plan and which is due to be voted on by the end of the year. If approved, this will be yet another pioneering legal milestone for the model.

In December 2021, the São João de Meriti City Council approved the review of its Master Plan including the CLT among its instruments for urban policy, but has only now published this in its Official Registry.

Besides Rio de Janeiro and São João de Meriti, Community Land Trusts are currently in discussion in various other Brazilian states. There are groups interested in adopting the model in Pará, Minas Gerais, São Paulo, Bahia, Santa Catarina and the federal capital of Brasília. In April 2022, a national seminar took the CLT debate to all regions of the country in exchanges with social movements connected to affordable housing, public agencies, community leaders, civil society organizations, universities, among other interested parties.

The inclusion of the Community Land Trust in master plans is an important strategy for spreading the model throughout the country. This legal provision makes the implementation of CLTs easier and more secure, in addition to making it possible for municipalities to adopt the model for implementation of land titling processes. Furthermore, bringing the CLT discussion into the process of revising master plans—a space that should be participatory and democratic—is a way of disseminating the model within society itself, bringing CLTs into a broader discussion on the right to the city, dignified housing and community development.

PDF copy of the release (Portuguese)