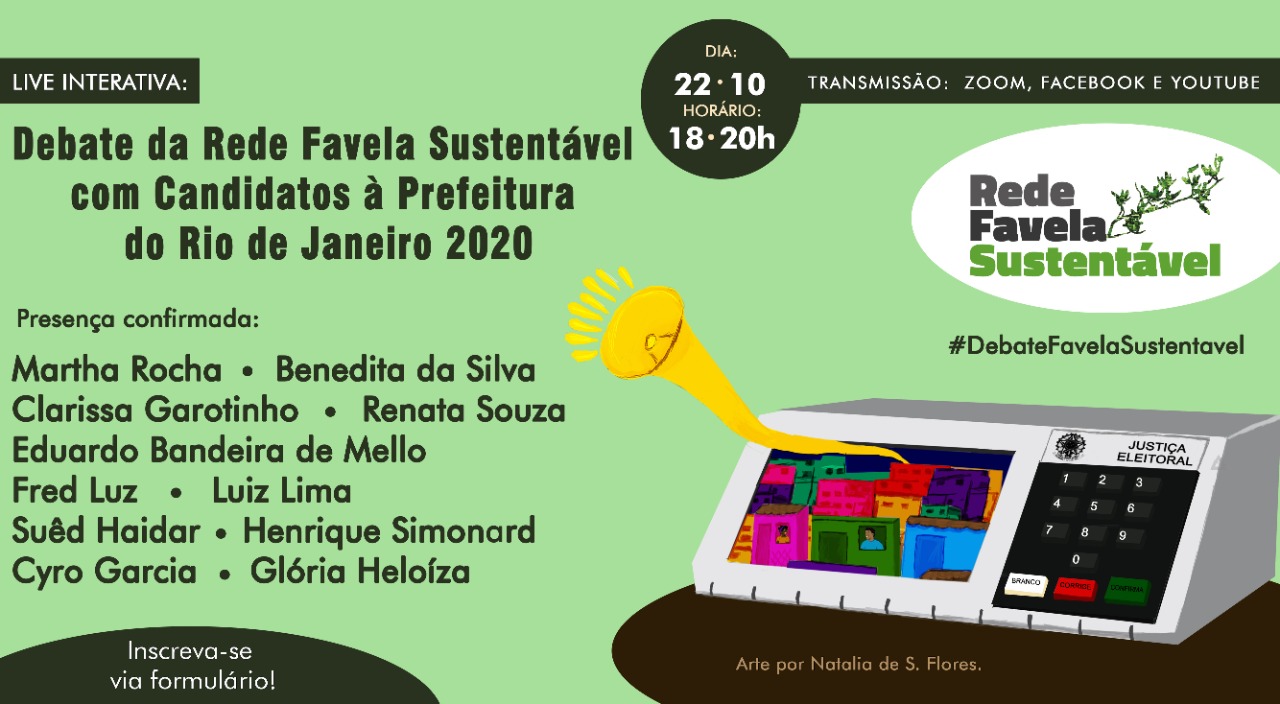 Rio de Janeiro–Eleven of Rio de Janeiro’s 14 candidates currently vying for position as mayor of the nearly 7-million strong city have confirmed attendance at a debate to be hosted by the city’s Sustainable Favela Network (SFN) on Thursday October 22, from 6-8pm (GMT-3), some three weeks to the November 15 elections.

Host to the debate is the Sustainable Favela Network, a network mapped at 111 favela-based sustainability initiatives in 2017 and since then engaging 480 community organizers and 900 technical allies focused on realizing the potential of favelas as sustainable, resilient and integrated neighborhoods. In 2020, the SFN has hosted 13 livestreamed events responding to the pandemic across Rio’s favelas, organized a campaign in support of the city’s waste pickers, and led to the spin-off Covid-19 in Favelas Unified Dashboard, among other activities.

Rio’s favelas, “widely misunderstood internationally as precarious slums,” according to debate organizers, have for the most part evolved from that state over generations, with a mixed bag of development, despite ongoing marginalization. In particular, they say that communities have been able to self-organize in incredible ways which need to be noted, and on which future policies must be built. The SFN aims to make this happen by increasing visibility, strengthening and expanding the sustainable attributes and projects that already exist in the approximately 1,000 favelas across the city of Rio, which house 24% of Rio de Janeiro’s population.

The only two candidates to have served as mayor in the past, Marcelo Crivella (2017-2020) and Eduardo Paes (2009-2016), confirmed their participation in the debate three weeks prior, but canceled this Monday, three days after receiving the 13-page commitment letter on which the debate will be centered. The letter was developed by 60 members of the Sustainable Favela Network acting in 38 favelas across the city and contains 21 proposals for commitment to public support and investment in environmental education, food security, solar energy, clean water and sewerage, solid waste management, community-based sustainable income generation, and memory and culture projects.

Debate moderator Dr. Theresa Williamson, urban planner and executive director of Catalytic Communities, the organization that initially launched and continues to facilitate the SFN’s activities, explains that “the commitment letter is full of inclusive and impactful public policy proposals ripe for the picking.” Reflecting on the relationship of the Sustainable Favela Network to the UN’s Sustainable Development Goals (SDGs) and Agenda 2030, she explains that “it’s as if we took the SDGs and channeled them through a consultation process with the most engaged local actors in these communities, resulting in finely tailored proposals so that Rio can in fact achieve the SDGs.”

The Sustainable Favela Network-hosted debate marks a unique opportunity to hear from the candidates, given that only one broadcast debate took place on the Band network on October 1 and all others have been cancelled. It also marks a change in approach to debating, whereby attacks and direct confrontations will not be allowed, the focus instead being on candidates’ responses to proposals set forth by favela leaders themselves. Rather than technocrats setting the agenda, candidates will be invited to present concrete proposals for the coming four years directed specifically to the city’s most marginalized and underinvested areas, inspired by those communities themselves.

For Lidiane Santos, organizer with the Alfazendo environmental education NGO in the City of God favela, “this is an opportunity to show the candidates that, despite all the disbelief and attacks against social movements these past years, that we remain strong, organized and fighting to positively influence the places where we live. The letter represents the desire of social movements to contribute in building public policies baesd on the solutions we’ve already created in each favela.”

The October 22 debate will be held on Zoom for Sustainable Favela Network members and the press from 6-8pm (GMT-3) and accessible live on Facebook and YouTube. There will be three opportunities for each candidate to speak, the first in response to the commitment letter, the second in response to a question posed by a Sustainable Favela Network member, and a final opportunity for closing remarks.

WHEN: Thursday, October 22, 2020, from 6-8pm GMT-3 (Rio de Janeiro)
LANGUAGE: Portuguese
WHERE: On Zoom for press. Sign up here. For public, watch on YouTube here.
IMAGES FOR REPORTING: Feel free to use these images attributing to photographer in caption, if available and if not, Catalytic Communities.
ACCESS THE PORTUGUESE RELEASE HERE.