The SFN has been holding knowledge exchanges among its members since 2018, strengthening socio-environmental initiatives across Rio’s favelas. The SFN holds immersive exchanges in favelas where there is an organization with in-depth experiences that has become a reference for the broader network. Online exchanges were also held during the pandemic through livestreams, including the SFN’s first international exchange. During these events, participants share knowledge and skills and get to know the host organization directly on the ground.

The exchange at CEM focused on the theme of food sovereignty, led by Ana Santos, CEM’s coordinator, and other members of the team that work on the production of agroecological foodstuffs in several Terra Prometida allotments, in the deforested areas around the community, CEM’s headquarters and at the organization’s base of operations. 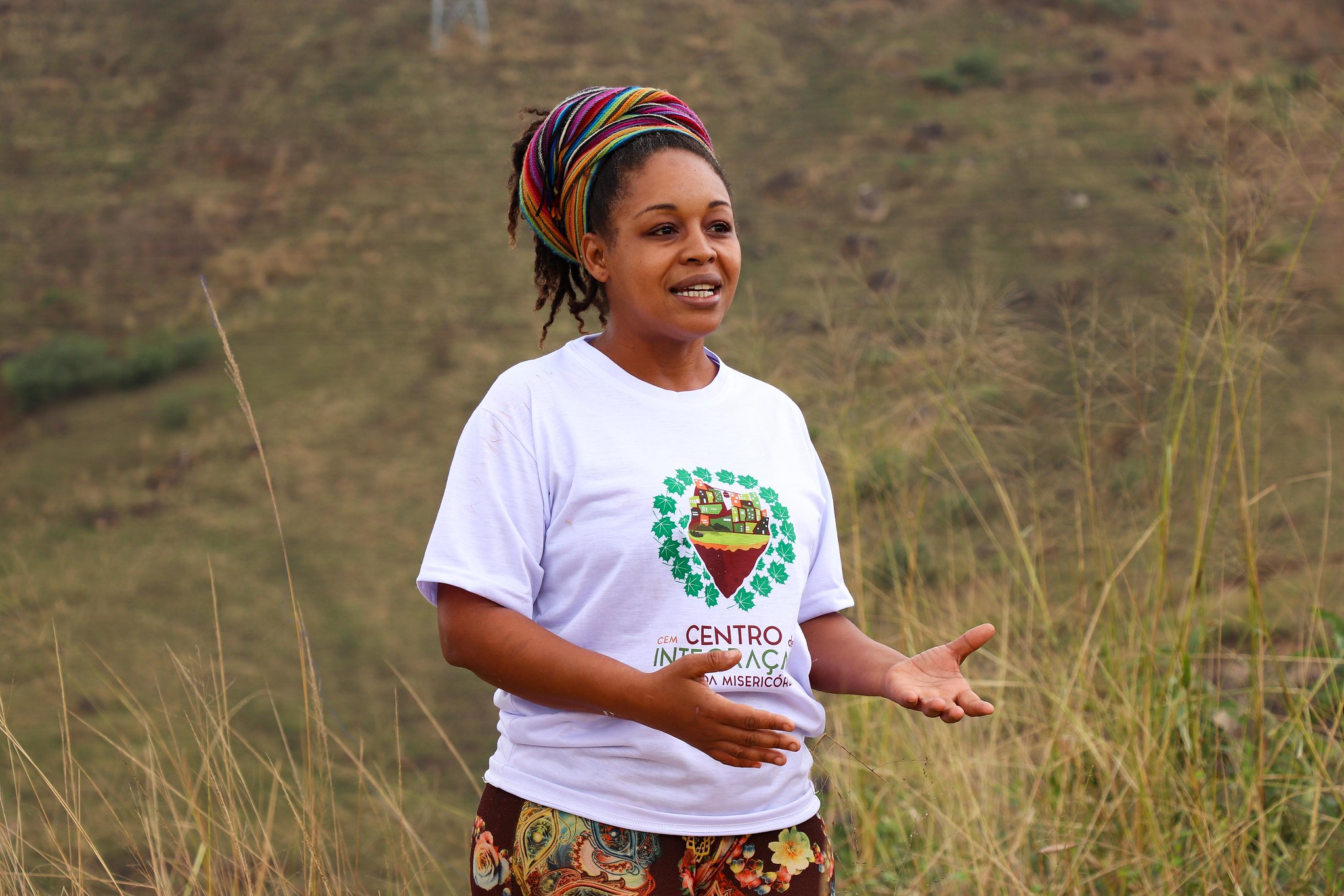 The August 6 event began at 8:30am with a delicious agroecological breakfast, comprised of cooked vegetables and natural fruit and vegetable juices made with fresh produce from the favela’s gardens. Spreads and cakes were made with zero waste, a cause at the heart of the Women in Action collective’s activities, a group that works within CEM. “The women of CEM,” as they are referred to, work to produce new recipes and advocate for food sovereignty in the favelas. The dedication and generosity of those who plant, harvest, nurture, and work together in Terra Prometida, people like Leoildes Xavier, Maria do Carmo Silva, Vanessa Gomes, Rose Trovão, Jéssica Paz, Joyce Silva, Márcia Silva, Anne Santos, Evelin Dias, Kátia Rosa, and coordinator Ana, were the main ingredient for the warm welcome which kicked off the event.

After breakfast, CEM members, community organizers from diverse favelas, technical allies and other members of the Sustainable Favela Network walked the community to learn about the reality of a favela with a rural feel geared toward urban agriculture. The participants gathered at a high point in the community with views of Complexo da Penha, the Church of Our Lady of Penha, the entire Leopoldina region, and the Guanabara Bay in the background. “When we talk about a green space in the favela, we are talking about living well and building other alternatives to live well in this place!” Ana exclaimed during the round of introductions. 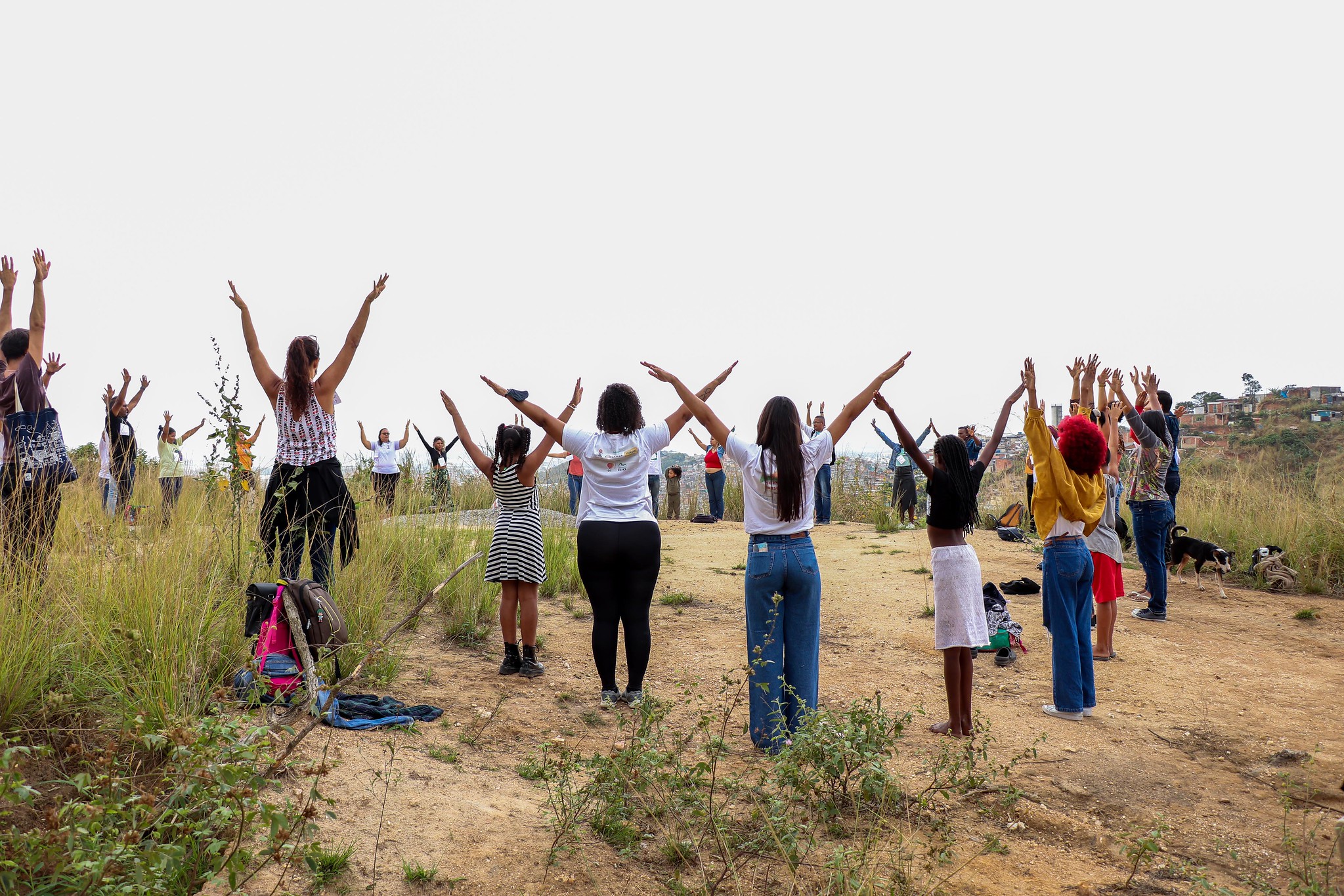 A collective yoga exercise exalted the connection between human beings and the land where we plant and live, and reflected the power of the land at Terra Prometida (in English: “Promised Land”). This land where Afro-Brazilians have been killed through State violence is the same that provides agroecological, pesticide-free food, and a home to favela residents.

Afterwards, CEM members guided participants to a region known as Pedreira—Quarry—where mining company Polimix has been chipping away at the Serra da Misericórdia massif for years, without regard for the health and sanitation challenges this imposes on the surrounding area. Amid the piles of stone dust, participants discussed how environmental racism echoes throughout Terra Prometida and other favelas around the quarry, such as Vacaria, Sem Terra and Estradinha. Residents of these favelas experience respiratory problems, noise pollution and other impacts due to the stone dust, truck traffic and explosions produced by the mining company. 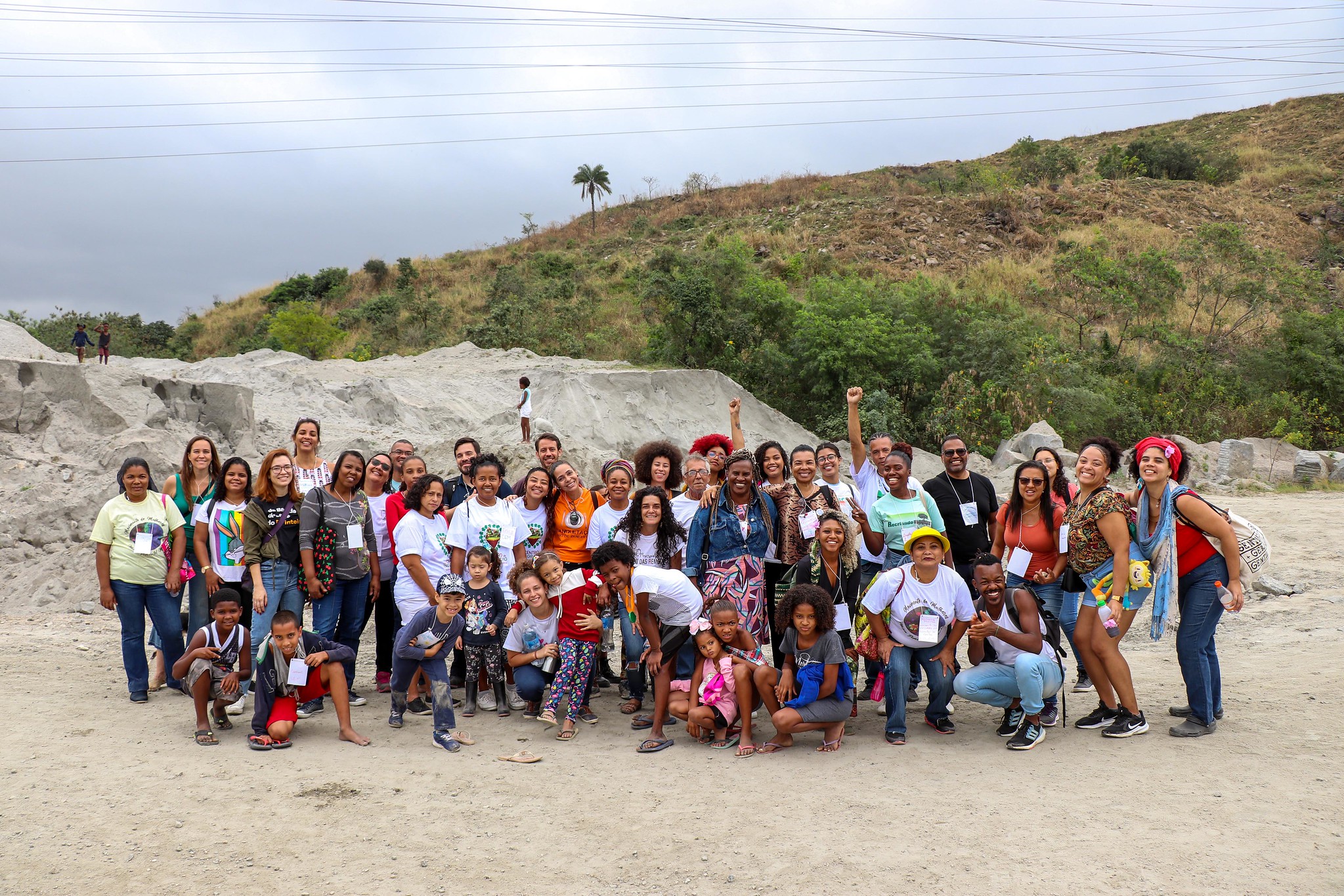 Ilaci Oliveira, responsible for the Transvida Recycling Cooperative and Lar dos Sonhos—community projects that are also part of the SFN and active in Complexo da Penha—said that a significant proportion of the respiratory diseases that affect people living in the surrounding area are caused by a large gray cloud of dust originating from the area around the quarry.

The challenging coexistence of the predatory exploitation of the environment and low-income housing is tempered by community connections planted and harvested in the ground at Terra Prometida. Participants of the SFN exchange at CEM were able to experience this collective planting as part of the event’s program.

Divided into three groups, the first climbed to a high area of the favela where they worked on an agroforestry plantation. Marcelo Silva and other members of CEM organized the collective action in the agro-forest, harvesting bushes for ground cover and planting fruit trees. These trees started as seedlings which germinated, grew and multiplied in CEM’s own nursery.

Leoildes Xavier hosted the second group in her backyard to harvest andu beans and thresh them to make a salad for lunch. This group also worked together briefly in the collective backyard at CEM’s base of operations to harvest aroeira leaves—used for dyeing and planting—and some manioc.

The third group stayed in the base of operations with the children and young people present at the event to paint posters showcasing the kids’ view of their community. This activity was organized by young Manuela Santos and Joyce Silva, a teacher who works with children at CEM. 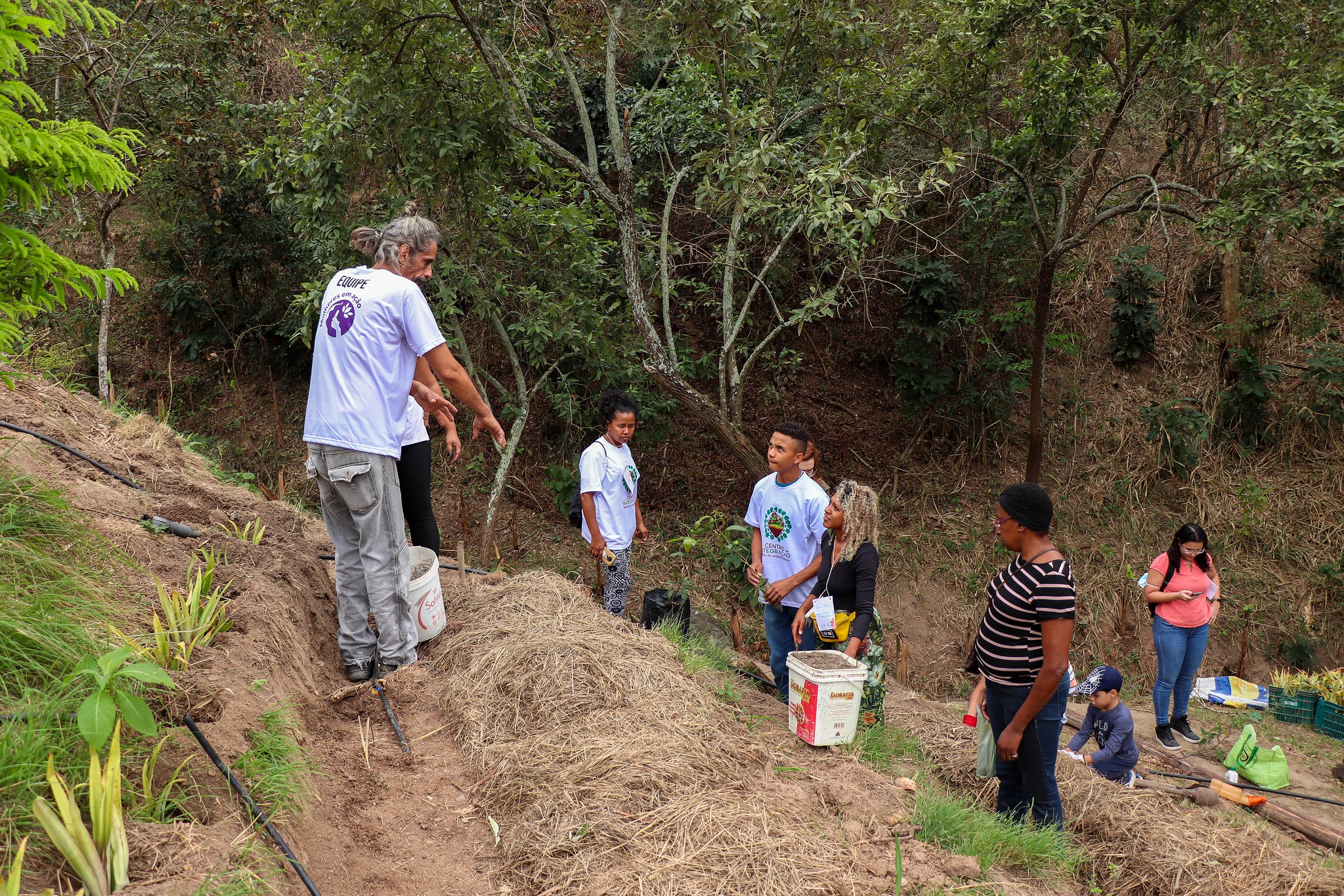 After a morning of many conversations and working on the land, CEM offered an agro-ecological, colorful and flavorful lunch, the result of the careful planting, harvesting, and cooking done by the women. Vegetarian bean stew, banana meatballs, vinaigrette with banana peels, and other dishes delighted the exchange participants. The colors and flavors sparked everyone’s curiosity and interest in reproducing the recipes in their own communities.

This collective praise of CEM’s culinary work inspired the women who work in the kitchen to produce a book of recipes to be compiled and shared with all the Sustainable Favela Network. The book will be a kind of ancestral revival, a creative-historical record that celebrates diversity and stimulates a richer food culture.

Following on from the base of operations, the gardens where produce is grown, and the streets where exchange participants walked, the event progressed to Bar das Pedras, whose owner, Paulo, kindly offered his space to host the exchange’s afternoon discussion circles. These discussions—under the title Coffee with Politics—revolved around three themes: food sovereignty, mobility, and environmental racism.

The group that discussed the theme of food sovereignty was led by Ana Santos, reflecting on the question of “what does it mean to live and cultivate food in the favela?” Asked about the relationship between food sovereignty and power, most said that the favela is not the first thing that comes to mind. Participants emphasized that this debate is also about the right to land, to the city, and to the favela itself. One member, Priscila Marcelino, noted that residents in the favela having the ability to choose how and what to eat is power, is revolutionary, and is a right taken away from the children and grandchildren of rural migrants. Dalva Ribeiro, an SFN member from the Rosa Reviver Institute, reinforced this point when she gave a moving account of her ancestry and the importance of having a connection with the land and food for her health.

The discussion concerning mobility was mediated by Larissa Amorim, from Casa Fluminense, a partner institution of SFN and CEM in the exchange activities. The central theme was to guarantee the right to public transportation and to the city for the favela population. As highlighted by Alcebíades Fonseca, from NESPES in Mesquita, and Bruno Almeida, from the Historic Orientation and Research Nucleus of Santa Cruz (NOPH) in Rio’s far West Zone, the favela population lives with precarious transportation. Rosana Freitas, from the Maria Pimentel Marinho Women’s Movement, highlighted that the absence of basic sanitation is also linked to the quality of mobility inside the favela because transiting through alleys and lanes coexists with ditches and flooding. 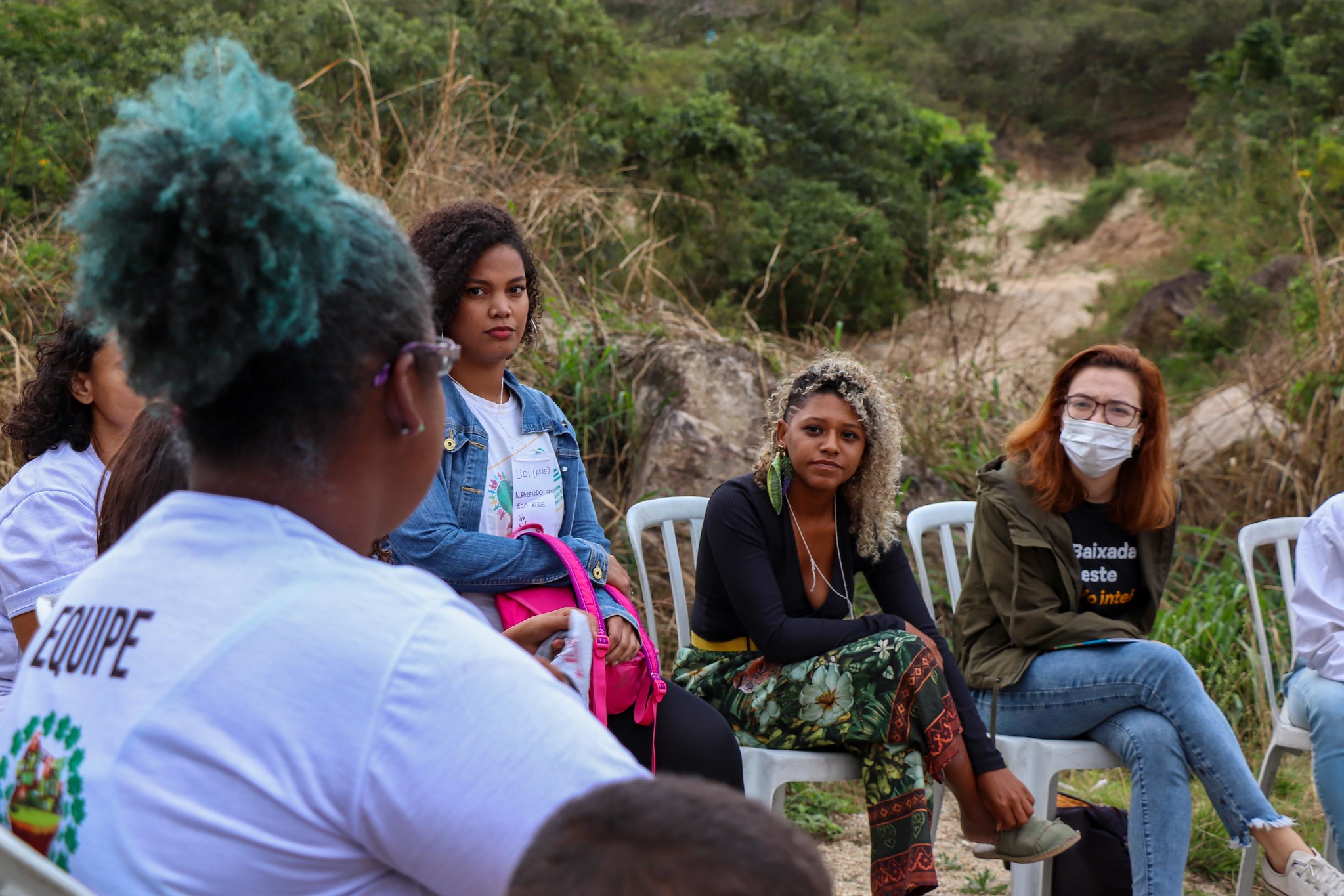 The third discussion circle—which addressed environmental racism—was conducted by Gisele Moura, coordinator of the Sustainable Favela Network, and Jennifer Simões, from Casa Fluminense, and focused on the favela population’s right to water. Adilson Batista from the Camorim Quilombo shared powerful insights about ancestry and models of consumption and production. The way racism allows some spaces to be designated as sacrificial zones, where it is permissible to pollute, contaminate, and neglect rights was also brought up. Laurinda Delgado from NESPES of the Coreia community in Mesquita talked about how this is a struggle for the right to life, embedded within the issue of the environment. Vanessa from CEM stressed the importance of not romanticizing the actions that combat racism and implement climate justice in favela territories, as these actions are only needed because there is no guarantee of basic rights.

Next, the points raised in the small discussion circles were shared with the wider group. The conversation concluded with a full-group reflection that affects the communities of many leaders present: State violence in favela territories, the genocide of black youth, and the socio-environmental mobilization against the armed powers.

Born and raised in Complexo do Alemão, cameraman and activist David Amen from the Roots in Movement Institute filmed the entire exchange. He also introduced the conversation about State violence, recalling the recent massacres that occurred in Complexo da Penha and Complexo do Alemão—both surrounding Serra da Misericórdia—as well as those that took place in Jacarezinho and other favelas.

During the full-group discussion circle, several people expressed both the revolt and power of the favela voice that is faced with a State that enters the community only when armed. With a lack of quality public services, it is mutual aid by residents themselves that often meets emergency needs in the favela. Sandra Teixeira, a resident of Vila Autódromo and instigator of Rio’s Evictions Museum, in the West Zone, Jonathan, Evelin Dias, Paulo and Jéssica Paz, and residents of Vila Cruzeiro all gave powerful and impactful speeches about their experiences.

Closing the SFN exchange at CEM, Ana Santos shared two priprioca root stalks, an Amazonian native herb, which she got from Paolo, a member of the Carioca Network of Urban Agriculture. The herb was shared to encourage the exchange of seedlings and seeds. Denise Santos, from Morro do Salgueiro, and Sandra Teixeira, from Vila Autódromo, were given the root stalks, which are stems from which new plants sprout when cultivated in fertile soil.

May new ideas and socio-environmental initiatives be sown and grow in the favelas and peripheries of Greater Rio from the powerful energy and knowledge exchanged in Terra Prometida!

Photos and video by David Amen. Watch the video of the exchange and activate English subtitles here.