Press conference and launch event, on June 4, will be attended by residents and allies who are leading the projects. Click here to register. [View PDF]

June 1, 2022—Is Rio’s cleanest sewage in the favela? The answer is yes! In the video above, released today and produced to be used by the press to bring visibility to the Vale Encantado biosystem, you will see how an isolated community in Rio de Janeiro’s Alto da Boa Vista region is becoming a reference of sustainability for the entire city.

Watch the Video and Incorporate It Into Your Reporting, Here.

Vale Encantado has just taken a leap as an incubator of sustainable practices with the launch, on June 4, of a biosystem that will treat the entire community’s sewage and solar panels at the community cooperative. These two projects, alongside others being developed by the community, relied on the participation, training and work of residents who, for decades, have sought to subsist in environmentally sustainable ways. The launch of the biosystem connecting the entire community to sewerage infrastructure, and the solar panels, represents yet another achievement by the community, which is already considered a model to be followed by other favelas. 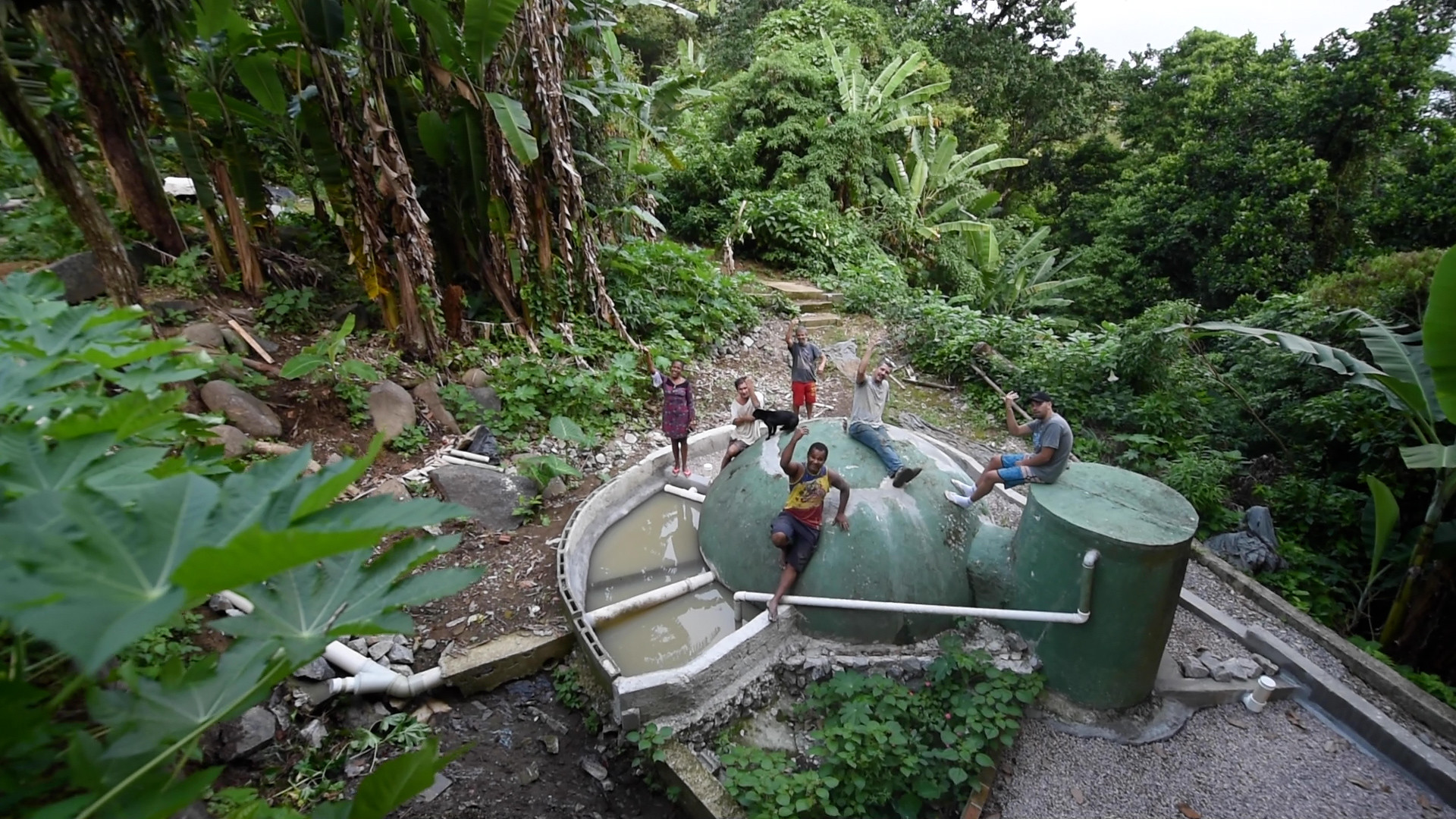 The construction of the Vale Encantado ecological sanitation biosystem began in 2015 through a partnership with researchers from Rio’s Catholic University (PUC-Rio), who won a public bid from the Research Support Foundation for the State of Rio de Janeiro (FAPERJ). With this funding, they built a biodigester that had the appropriate size and scale to treat sewage from every house in the community. However, during the first phase, due to lack of resources, only five houses were connected to the system, despite having the ability to treat sewage from the community’s 27 structures.

In 2021, Rio’s Sustainable Favela Network* (SFN), through its managing organization Catalytic Communities (CatComm), and the Environment in Motion Institute, through German organization Viva Con Agua, and in technical partnership with Taboa Engineering, attracted the resources necessary to connect all the houses in Vale Encantado to the ecological sanitation network.

As of the press conference on June 4, the system will be fully operational, connecting all the homes and treating 100% of the community’s sewage. Vale Encantado will become the first favela in Rio de Janeiro with 100% ecologically-treated sewage.

In the video, resident Rozineida Pereira gives her account of these green initiatives. She is part of the Vale Encantado Cooperative’s community kitchen, which uses locally grown food. Her vegetarian concoctions are served to visitors to the community.

Like Pereira, other residents shared how the community’s green projects impacted their lives. Otávio Barros, president of the Residents’ Association, talks about his relationship of love and sense of belonging to the place, as well as telling how the idea of building the biosystem and installing solar energy came about. Barros realized the potential Vale Encantado had in focusing on its vocation as a green community and developing the community based on its assets, generating work and income, as well as contributing to the fight against threats of eviction.

“This biodigester project fit like a glove because we were being threatened with forced evictions. One of the reasons they wanted to take us away from here was that they said we were polluting, dumping sewage out in the open. Here, we don’t have basic sanitation. We don’t just ‘dump our sewage,’ we have septic tanks and all that. We don’t do it because we want to, it’s because we don’t have it!” — Rozineida Pereira, resident and member of the Vale Encantado Cooperative community kitchen 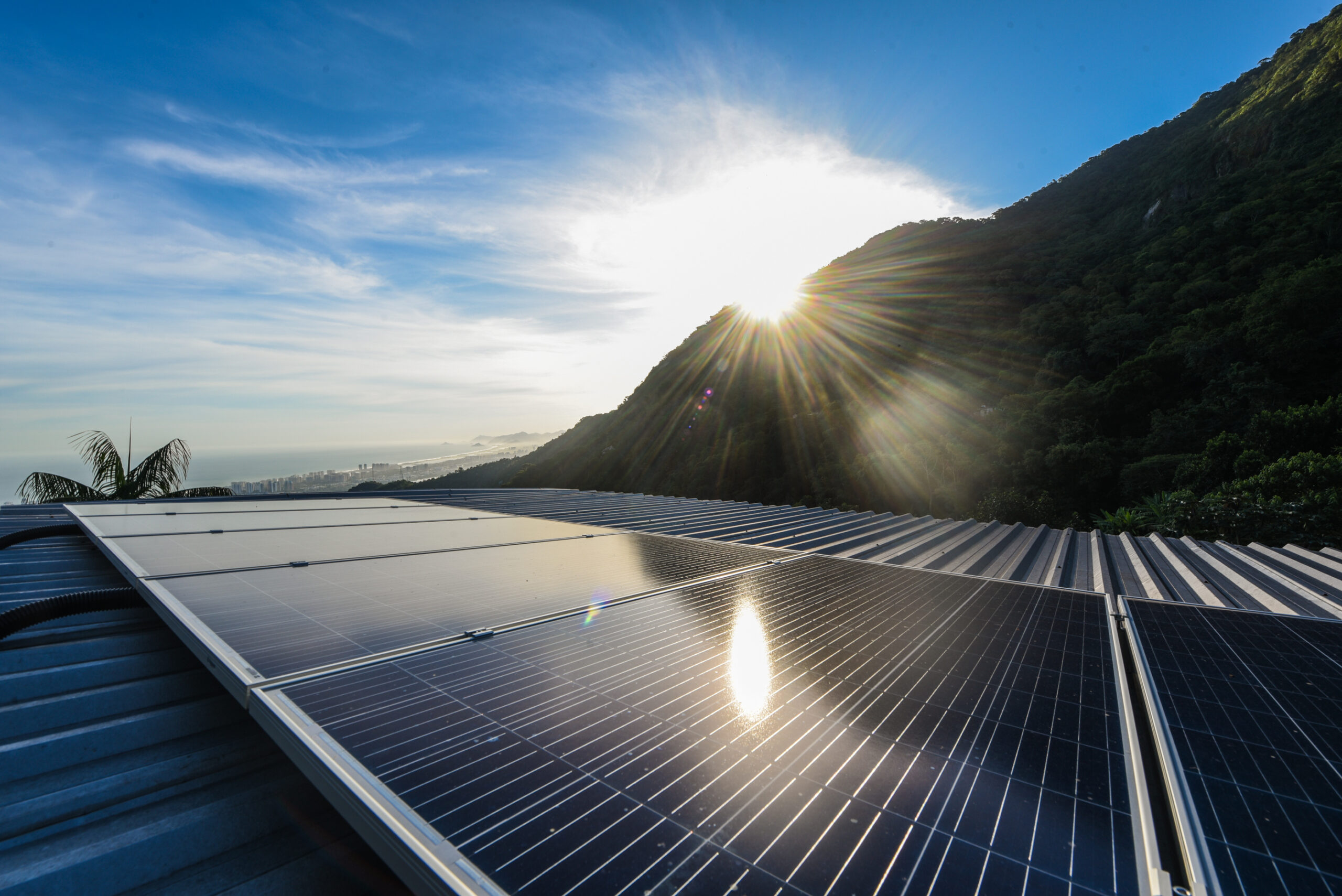 According to residents, these green initiatives have multiple impacts. For resident Luciana Cardoso, the biosystem will be very good, reducing the incidence of disease and the number of cockroaches and rats. Her neighbor Magdalena Cordeiro highlights that the project will bring very good things by channeling the community’s sewage, which she said has never been done by public authorities. Renan Fernandes, a resident who was involved in the system’s construction and in connecting the homes to the biodigester, reflected on the importance of training and empowering residents within the scope of the project, a fact also mentioned by other residents.

“When they started this project, I didn’t have much faith in this messing with waste and such. But then it was explained to us, we took classes and courses on the plumbing part, on the bamboo that maintains the bacteria that release the gas. You end up liking it and adapting to all that stuff and you don’t want to let it go. It’s really great!” – Luiz Carlos, resident and builder of the Vale Encantado ecological sewerage biosystem

Along with residents, the video also interviews Leonardo Adler, the sanitary and environmental engineer who participated in the construction of the biodigester since Barros’ idea emerged, in 2011. At the end of the video, Barros and Adler tell a little about the history of the project, its phases and technical details.

Watch the Video and Incorporate It Into Your Reporting, Here.

Click here to participate in the press conference and launch.

NOTE: The launch, originally scheduled for April 30, was postponed to June 4 to provide an additional month for the natural process of adaptation of bacteria that characterize the biosystem to take place, in order for the event to take part in activities associated with World Environment Day being developed by the Sustainable Favela Network, in solidarity with the Popular Conference on the Right to the City, and to enable the participation of more journalists and members of the press.