On Saturday morning, November 30, 2013, Catalytic Communities and the Vidigal Neighborhood Association held a workshop bringing together twenty-five residents of Vidigal to discuss the ongoing transformation occurring within their community from an outside force: gentrification. 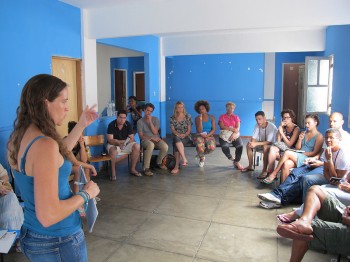 Although Vidigal has historically received families from all parts of Brazil migrating to the city, the present influx of temporary residents, most of whom are foreigners, is contributing to an unwelcome rise in rent prices for existing tenants. The prime location of Vidigal, directly overlooking the ocean and in close proximity to the beachside neighborhoods of Leblon and Ipanema, is a focus for the trend, attracting real estate speculators who wish to capitalize on this potentially lucrative opportunity in an increasingly expensive city that is on the eve of hosting two international sporting events.

Residents at the workshop had numerous fears and concerns, ranging from renters concerned with the hike in rents to owners finding it difficult to afford rising utility costs associated with public investments in the area. Others expressed concern over the erosion of the community’s cultural vibrancy and core identity. Still others expressed they no longer feel as safe in the presence of so many new people in their neighborhood. The aim of Saturday’s workshop was three-fold: to present a contextualized understanding of gentrification using international examples; to discuss how gentrification is already affecting Vidigal; and to develop strategies and ideas for how the community can respond and take ownership of this process. 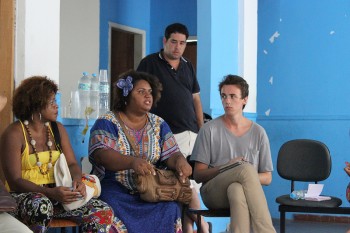 In introducing gentrification, CatComm’s Theresa Williamson explained that researchers often suggest there are positive and negative aspects of such changes that occur in lower-income neighborhoods around the world. At first, the arrival of new or more affluent residents can lead to improved services and infrastructure. Hand in hand with such changes, however, come increased prices, the loss of cultural identity, and also the arrival of new establishments like restaurants and bars that local residents cannot afford or in which they do not see themselves reflected.

Focusing on Rio specifically, Williamson demonstrated how the government has made a concerted effort through advertising and marketing campaigns to encourage international investment in the city. The global media has also played its role in reporting the price hikes occurring in various favelas, often suggesting this as a favorable trend. In one particular case, a journalist from the Financial Times went so far as to include a ‘Buying guide’ to encourage real estate investment in favelas by international buyers. 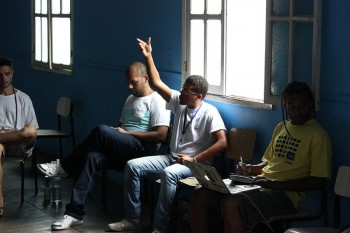 Residents then shared anecdotes of how people in Vidigal are beginning to sell their homes to speculators as they are tempted by the seemingly large sum of money being offered, but do not fully realize their property value and how much moving their family will impact their lives. Stories were told of how people end up moving to affordable developments located on the urban periphery, in places devoid of the close-knit community they were accustomed to, and in addition must now spend hours commuting to and from their jobs.

Residents identified the aspects of their community that they never want to lose, including the local culture, sense of community, and identity, among others. One resident asked, “What will Vidigal be in 2016, and who will be its people?” Residents expressed anxiety about losing parts of their community and shared identity in the years to come to outsiders. Another resident echoed this sentiment: “Culturally, what will become of Vidigal?” 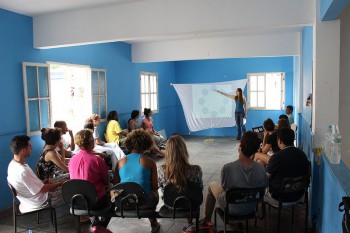 As these concerns continued to be expressed, the workshop transitioned to a brainstorm about possible steps and actions in order to take charge of this beginning wave of gentrification. A popular idea was further developing the home stays through “home hostels,” where residents would be the ones profiting from visitors staying in one of their rooms. Another suggestion was staging a peaceful protest outside of the 5-star hotel that is under construction at the top of Vidigal. Additionally, the importance of financial education was discussed, as a way of preparing residents who may be approached by real estate speculators or who are coping with rising utilities. Finally, the possibility of organizing Vidigal’s Association as a community land trust was touched upon.

The most urgent need, though, was to create a strong network of informed residents about gentrification and real estate speculation within Vidigal who are unified in defense of their community. At the close of the workshop, residents planned another event for January 7, 2014, at a public square located at the entrance of Vidigal to raise awareness and promote discussion of the issue in the community. Rosa, one of the event’s organizers, explained why she supports the workshops: “So that people who have lived here can have their voice! No, I will not leave here.” The mood at the end of the day was one of mixed concern and optimism, with everyone acknowledging there is work to be done to defend and preserve Vidigal and with fresh ideas on how that might happen.