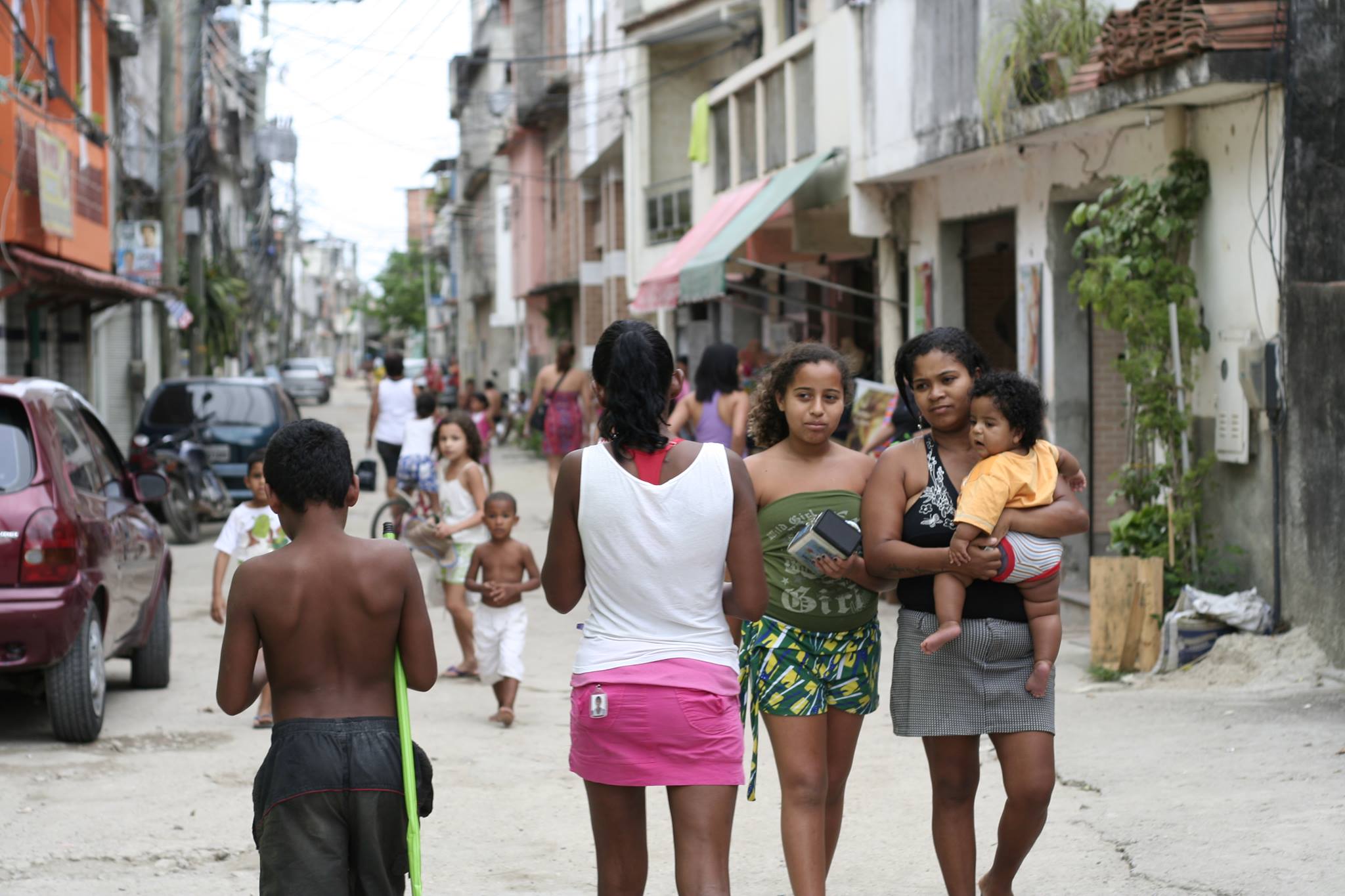 The term ‘favela’ is often translated to English as slum, shantytown, squatter community, or even ghetto. With these deceptive translations come negative imagery around crime, violence and desperate poverty.

But when I started working in Rio’s favelas as a participatory urban planner in 2000, I came to appreciate a host of qualities in these communities and to realize these translations and depictions are not accurate, and they are incredibly damaging to these communities.

A favela is simply a neighborhood that emerged from an unmet need for housing, where residents built their own environment, brick by brick, over generations. They are Rio’s affordable housing stock and home to incredible cultural wealth and resilience. Though they began as squatter communities or slums, today Rio’s favelas are almost universally consolidated and functional neighborhoods, housing nearly a quarter of Rio’s population of 6 million. Because they were unregulated and developed organically, they are exceptionally diverse. Oftentimes producing overwhelming challenges, yes. But also producing intangible assets.

Over nearly 120 years, Rio’s favelas have evolved into consolidated neighborhoods that are core to the identity that makes Rio unique. What they need now is investment and participatory development.

Catalytic Communities works to creatively integrate favelas into the city of Rio and make Rio’s communities into worldwide examples of effective urban development. We believe the qualities of Rio’s favelas can inspire communities everywhere.

We work on one timely and unique project at a time, and put a lot of attention into the detail of our work. Trust in the communities we serve is our biggest asset and we have worked to cultivate this trust since 2000, building a network of thousands of favela organizers, leaders and journalists. Our first program, launched in 2001, was the world’s first community solutions database for sharing favela solutions with the world, recognized by the Tech Museum in 2006. Our second major program was the Casa community technology hub, a community center in Rio’s Port area that over 5 years supported 1200 local leaders from across Rio’s favelas in digital training and networking. Our Casa was recognized as an ‘actionable idea’ for cities by the UN in 2006.

But what we’ve become most known for is our work since 2010 through RioOnWatch – Rio Olympics Neighborhood Watch – our watchdog news site. When we saw our community network–and the assets of these communities–being affected by Olympics policies starting in 2010, we realized bringing these voices to the world stage would be critical. Since 2010 we have published nearly 1200 articles by community reporters and international observers, covering all aspects of Rio’s urban development from favela perspectives.

We were the first to publish about World Cup and Olympics evictions starting in 2010, and favela gentrification in 2011. We have increasingly played a role introducing issues and pushing the debate on Rio forward during this period. We’ve developed a rich collection of local knowledge with every turn of events documented. A critical tool for community organizers, journalists, researchers, urban planners and human rights advocates worldwide.

“By channeling and maintaining a spotlight on them, since 2010 we have helped thousands of families in two dozen communities threatened with eviction keep their homes or receive better compensations.”

And most importantly, through our coverage we’ve seen policy changes, reversals, compensation increases for residents, and dramatic community empowerment.

This year we launched RioONWire, the world’s first favela news wire. In its first 3 months we tweeted over 2000 times. Anyone in the world can now follow, in real time, bite-sized event updates and breaking news from Rio’s favelas, in English, with background and context provided throughout the day. RioONWire was created to inform reporters arriving in Rio in the months leading up to the Olympic and Paralympic Games, so they have access to productive story topics and insight from Rio’s favelas on deadline, but it is proving useful to groups ranging from housing organizers and human rights defenders to Rio residents and researchers.

We happened upon something revolutionary. We’re taking hyper-local news from what were incredibly isolated, stigmatized and marginalized neighborhoods, and making them globally accessible, by anyone with basic English and Web access. We organize and curate information so anyone arriving at it can follow specific communities, stories, policies or issues. As a result the perceptions of outsiders who come in contact with our work have changed, become more humane.

“We happened upon something revolutionary. We’re taking hyper-local news from what were incredibly isolated, stigmatized and marginalized neighborhoods, and making them globally accessible… As a result outsiders’ perceptions have changed, become more humane.”

If we can take advantage of this unique moment to expand our reach, providing nuance, fairness and accuracy in favela reporting, we’ll reach a tipping point, and public perceptions will unequivocally switch, as will policies towards favelas.

Now, we need your help. We get requests for support from Rio’s favelas every single hour. And the speed and intensity is only growing through the 2016 Olympics and Paralympic Games.

You’ve heard of the struggle that residents of Vila Autódromo have suffered. This is the long-standing favela next to the future Olympic Park. Most of Vila Autódromo’s 600 families have now been evicted, but a hundred or so remain. If evicted, they will join the 20,000 families who have already been forcibly evicted in the lead-up to the Rio Olympics. They’ve become an international symbol of resistance in the face of enormous commercial pressure. Since 2009 RioOnWatch and our work with journalists has been key to tracking events unfolding here and making much of that visibility possible. We have documented this resistance and the city’s policies towards the community step-by-step, making their case crystal clear to the international community and allowing reporters and researchers to follow the case.

“This last year before the start of the 2016 Olympic Games will be the most important ever for our work.”

We have a unique window of opportunity through the 2016 Rio Olympic Games and we are asking for your help to realize our ‘RioOnWatch Media Package’. The intense media activity surrounding Rio de Janeiro over this coming year will provide a once-in-a-lifetime opportunity for us to set the record straight on Rio’s favelas.

If we are successful in our crowd funding campaign, we will:

Catalytic Communities has become a trusted resource and connector for Brazilian and international journalists focused on Rio, and the opportunity for us to support quality story production will only grow in the coming year. We want to be able to meet this opportunity by providing all of these services, linking hyperlocal news to global audiences, over the coming year.

We are asking you to help Catalytic Communities reach our fundraising goal of $78,240. Only with your help can we guarantee Rio’s favelas receive the attention and support they need through the 2016 Olympic Games.

Should we be successful in this campaign, we will be freed up to focus 100% on our core support of favelas through August 2016. For example, if we reach our goal our annual Rio Raffle will not be necessary and an additional full month of our work will be freed up for our core activities. But since the mileage donations will still be available, as a thank you to all our supporters in any capacity this year, including volunteers, researchers, and yes–you, all participants in this campaign–come December 31st we will choose one person at random to visit us, with a friend, in Rio next year.

And if you’re wondering what we’ve got planned for after the Olympics? Well, when the Olympics and Paralympics are over, we will complete and publish our longitudinal Media Analysis report of global coverage of Rio’s favelas since 2008, as well as conduct our final Favela Perceptions Survey, looking at how impressions of favelas have changed, worldwide, since 2010. Our Media Package will be complete with a “RioOnWatch Replication Manual” that citizen groups around the world can use to replicate our efforts in their towns over years to come. And we plan to publish RioOnWatch in photo book form and retire RioOnWatch as a historical document of these pre-Olympic years. We will then build our next program on the back of these pre-Olympics achievements: policies and programs in Rio’s favelas that are asset-based and focused on consolidating favelas’ potential as vehicles for sustainable urban development.

Thank you for your support!