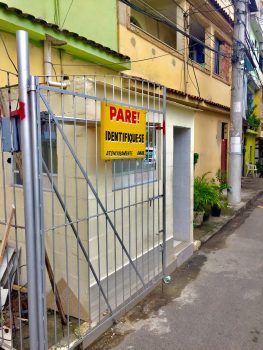 On the visit, president of the Asa Branca Residents’ Association, Carlos Alberto Costa “Bezerra” explained that Asa Branca is a 37-year-old favela in the West Zone of Rio de Janeiro settled during Governor Leonel Brizola’s mandate. Brizola is known for his leniency and support of favelas, insisting people should live close to work. Since the community was established after drug trafficking had begun to become an issue in Rio, security strategies were implemented there: residents built only broad perpendicular streets to the main road, making it unattractive for gangs to take control due to the lack of hiding places.

The visit began on the Avenida Salvador Allende close to the newly built TransOlympic BRT station of Asa Branca, for which 64 of the community’s homes were demolished. Some of those houses are now being rebuilt or reoccupied.

Bezerra highlighted another effect of the Olympics. He pointed to gates at the entrance of each of the community’s roads: “we installed twenty-three security cameras and gates in order to keep strangers out now that the community is so accessible due to the BRT.”

After walking through the different areas of Asa Branca, including the oldest, more developed area, we arrived at the newest area, occupied in 2001. There, a resident outside her home on Rua L. Vilasboas told us that her family was one of the hundred or so that rented in the older part of the favela and collectively came up with a plan to occupy this initially flood-prone area. Flooding has since been overcome by the community’s engineering prowess. 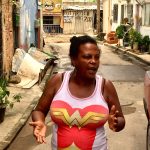 Together with Bezerra she described the strong sense of community here. “We came from the Northeast of Brazil and we didn’t have anything… At one point a human chain was getting everything into the house!” She describes the very beginning of her now several-story house: “I lived in one of the little shacks where we built around to elevate the ground, built the sewerage and paved the area.”

In addition to the community’s planning and effective lobbying for broad paved roads and the collective construction of a sewerage system, all the new 2001 lots were set by organizers to five by seven meters. Every day since, additional improvements have been made. On this visit, at the end of the street, neighbors were laying pavement to have it ready for this year’s June festivities, or festa junina.

After nearly forty years of effective self-build, organizing and advocating for public investment in their community, Bezerra is now concerned about the risk of gentrification: “all the empty lots surrounding our community will be filled with condominiums in ten years.” 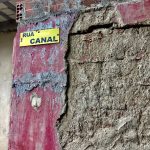 Bezerra finally leads visitors next to Asa Branca’s open stream, or channel, describing another negative impact of the Olympics: before the Olympics the community’s self-built sewerage had been connected by the authorities to the formal sewerage network, removing their contamination from the stream (although upstream pollution continued to be carried there). But now, developers have broken through this line, leading the sewage to return to the stream. The City has not responded to the community’s requests that the developers be held accountable.

The visit ends at the Asa Branca Residents’ Association. While passing equipment for the community radio station, Bezerra explains that the location for the station has not yet been chosen. He closes out the afternoon on the Association’s roof where capoeira lessons are provided, where he announces that after twenty years being reelected every four years to lead the Association, he–and the community–will now transition to a new set of directors, trained and supported by Bezerra, who are getting ready to take over.