Recently, a number of articles have circulated in the Brazilian media reporting, with a mixture of wonder and reproach, the doubling in scale of the nation’s favelas over the past 36 years.

Amid the multiple crises that have shaken Brazil over the last few years, a scenario exacerbated by the Covid-19 pandemic, we have watched the systematic deterioration in the living conditions of Brazilians, with a particular impact on lower-income populations that have already been made vulnerable, historically, by an exclusionary and prejudiced social structure. In this context, the growth of favelas and informal settlements emerges as a visible—and, for many, uncomfortable—consequence of our country’s situation.

In spite of this, the narrative frequently bases itself on the misconception that labels favelas as a problem. This view clouds readers’ perspectives and prevents them from realizing that the real problem lies in the lack of public policies promoting access to housing. Thus, rather than a problem, favelas and other informal settlements present themselves as a solution: the only solution for millions of Brazilians who need shelter, who need to protect their bodies against the elements and against violence and, above all, who need dignity.

It is also important to say that, besides being the only possible housing solution for millions of Brazilians, favelas consolidated over time become unique, potent spaces of creativity, with the collective construction of common assets that are crucial for the survival and development of residents. Favelas and informal settlements should, therefore, be regarded with more nuance, beyond the dominant view of their precariousness, of something that needs fixing—or even exterminated. These are territories that must be respected for the qualities they produce—for the memories and culture they hold in every narrow street and building.

Another erroneous assumption frequently found in the media’s narrative about the growth of favelas and informal settlements is the alleged opposition between their existance and environmental conservation, which is so relevant to our country. There is an attempt to build an argument that favelas are the great culprits in processes of deforestation, invading protected areas without public authorities being able to prevent it.

Without going into a discussion of who the true culprits are of the significant deforestation occurring in Brazil, it is important to consider that the environment is not solely made up of flora and fauna. The environment involves all living beings that inhabit it and their needs, including humans. Favelas—as with all human environments—are part of the environment. However, they often interact with city’s natural elements in a healthier way than the rest of our cities.

And that happens because, through the common assets and creative solutions historically developed in consolidated favelas, there are examples of sustainable alternatives that engage healthfully with our environment’s natural elements. Examples of these alternatives are their popular urban planning that favors pedestrians over cars and projects for community gardens, solar energy, sustainable sewage systems, green roofs, and more, making up social technologies that begin in favelas and seek to build a sustainable reality in our cities from, and not in spite of, favelas. An example of such networks is the Sustainable Favela Network* that, since 2017, has brought together hundreds of initiatives from favelas across Greater Rio.

Beyond the perspective of protagonism in the environmental arena, favelas and other informal settlements also present themselves as powerful territories for innovative arrangements for territorial formalization and management that are able to break away from the logic of individual land ownership, allowing a more compassionate and empathetic society to flourish.

One example of such arrangements is the Favela-Community Land Trust* that has sought to guarantee land security, access to housing and the strengthening of vulnerable urban communities since 2018. 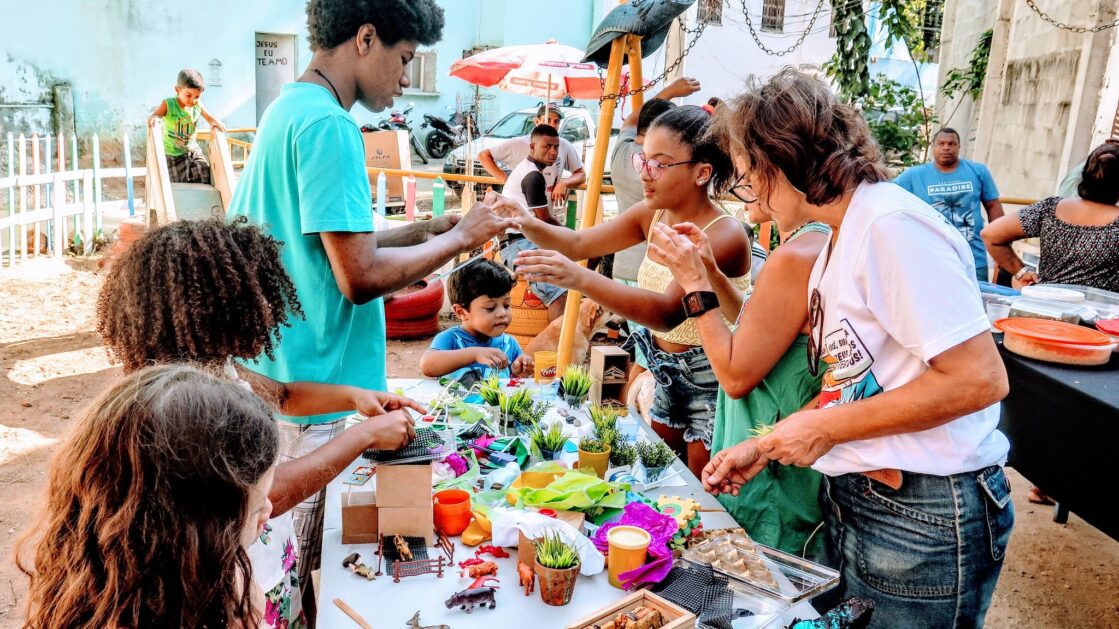 CLTs are a collective land management model recently expanding worldwide, with over five decades of history and a great potential for favelas and informal settlements, as demonstrated by the Caño Martín Peña favelas in Puerto Rico.

Through CLTs, favelas can, once again, become the protagonists of a model that promotes a type of territorial development that is both broad and self-managed, stimulating more precise and efficient responses to the environmental, social and economic challenges imposed on these territories, through formalization by a CLT now recognized and empowered to perform this role.

It is crucial to change the view about the growth of favelas in order to understand this phenomenon for what it truly represents: a consequence of misguided housing and social policies in one of the most unequal nations on Earth. At the same time, we need to recognize the potencial of solutions and assets present in consolidated favelas so that, based on the protagonism of residents, environmental, social and territorial solutions can be scale up not only for favelas and informal settlements but also for all our neighborhoods. For this we need an integrated view of our cities and their diverse territories.