On July 9, Catalytic Communities’ Sustainable Favela Network (SFN) Water and Sewerage Working Group held an online teach-in event, “Perspectives on the Transformation of Basic Sanitation in Favelas after the Pandemic.” Practitioners from Rio and São Paulo’s peripheries discussed their experiences of access to clean, drinkable water and basic sewerage during the pandemic, how the water and sanitation situation in favelas reveals these cities’ necropolitics, and possible solutions.

The special guests were: Irenaldo Honório, physiotherapist, nursing technician, and former president of the Pica-Pau residents’ association, in Cordovil, in the North Zone of Rio de Janeiro; Alexandre Pessoa, civil sanitation engineer and doctor of tropical medicine at the Joaquim Venâncio Polytechnic School of Health (EPSJV/Fiocruz); Otávio Alves Barros, president of the Vale Encantado Residents’ Association and Vale Encantado cooperative in Alto da Boa Vista; Samantha Reis, graduate student at the Federal University of Rio de Janeiro (UFRJ) and data analyst and developer of CocôZap, a Data_Labe project in the favelas of Maré; Fábio Miranda, musician and permaculturist, inventor of sustainable technologies at the Favela da Paz Institute in São Paulo, and founder of the Periferia Sustentável project; Alessandra Alvez-Roque, floral therapist and herbalist, founder of Naturalê, and manager of the Wash Your Hands initiative, both in Morro da Providência; Larissa Gama, environmental and sanitation engineering graduate student, and coordinator of the Águas da Baixada (Waters from Baixada) project of Engineers Without Borders; and Ana Lúcia Britto, UFRJ urbanism professor, researcher at the National Institute of Science and Technology and the Metropolis Observatory, and project coordinator at the National Observatory of the Rights to Water and Sanitation.

The event’s eight speakers addressed 86 people via Zoom, with over 500 accompanying via Facebook Live.

“The pandemic shed light on the sanitation situation in the favelas,” said Britto. “We have known it for a long time, but only now is the media giving it a lot of attention.” The lack of basic sewage infrastructure in favelas has yielded dire consequences during the pandemic, the panelists said, making government neglect even more lethal than before.

Meanwhile, “sometimes the necessary knowledge is within the network you’re a part of,” said permaculturist Fábio Miranda. “Everyone has the ability to develop low-cost sustainable technology. Yes, we complain about the problem, but why not create solutions?”

“Who is responsible for sewage systems in favelas?” asked Britto. “In Rio de Janeiro, an agreement was made in 2007 that said that Rio-Águas (Rio de Janeiro’s municipal agency for water management), the city government, is responsible. And so, people don’t even know who to complain to. It’s not even clear: water is provided by CEDAE (the state-owned water utility) and sewerage by the city. Since 2007, the city has not done any maintenance work.” As this year is a municipal election year, she asked, “What are the next mayor’s proposals for the favelas? Because the current one has no action plan for them.”

“The Brazilian government has a historic debt in relation to sanitation, leaving a series of precarities in water management, sanitary sewage,” said Pessoa, who noted that problems with infrastructure and services “vary according to buying power, skin color, and education. There exists a difference in access to the right to basic sanitation.”

“Utilities have no interest in ensuring sanitation in favelas. Return is low and investment cost is high,” noted Britto, adding that “there is a very large deficit of public action to realize the right to water. Service providers have this very serious divide with the favelas of Rio de Janeiro.”

When asked about sanitation plans and whether structural investments would be prioritized, Pessoa answered that “favelas were disregarded in the municipal plan. There was no participation by society. The Brazilian National Development Bank (BNDES) project itself is not considering universalization in favelas. This is environmental racism and state violence.”

“Sanitation has never been a priority in favelas because it’s linked to quality of life,” said Alvez-Roque, agreeing that “inadequate access to sanitation is a reflection of social inequality. This dates way before the pandemic. It’s been neglected for a long time.” 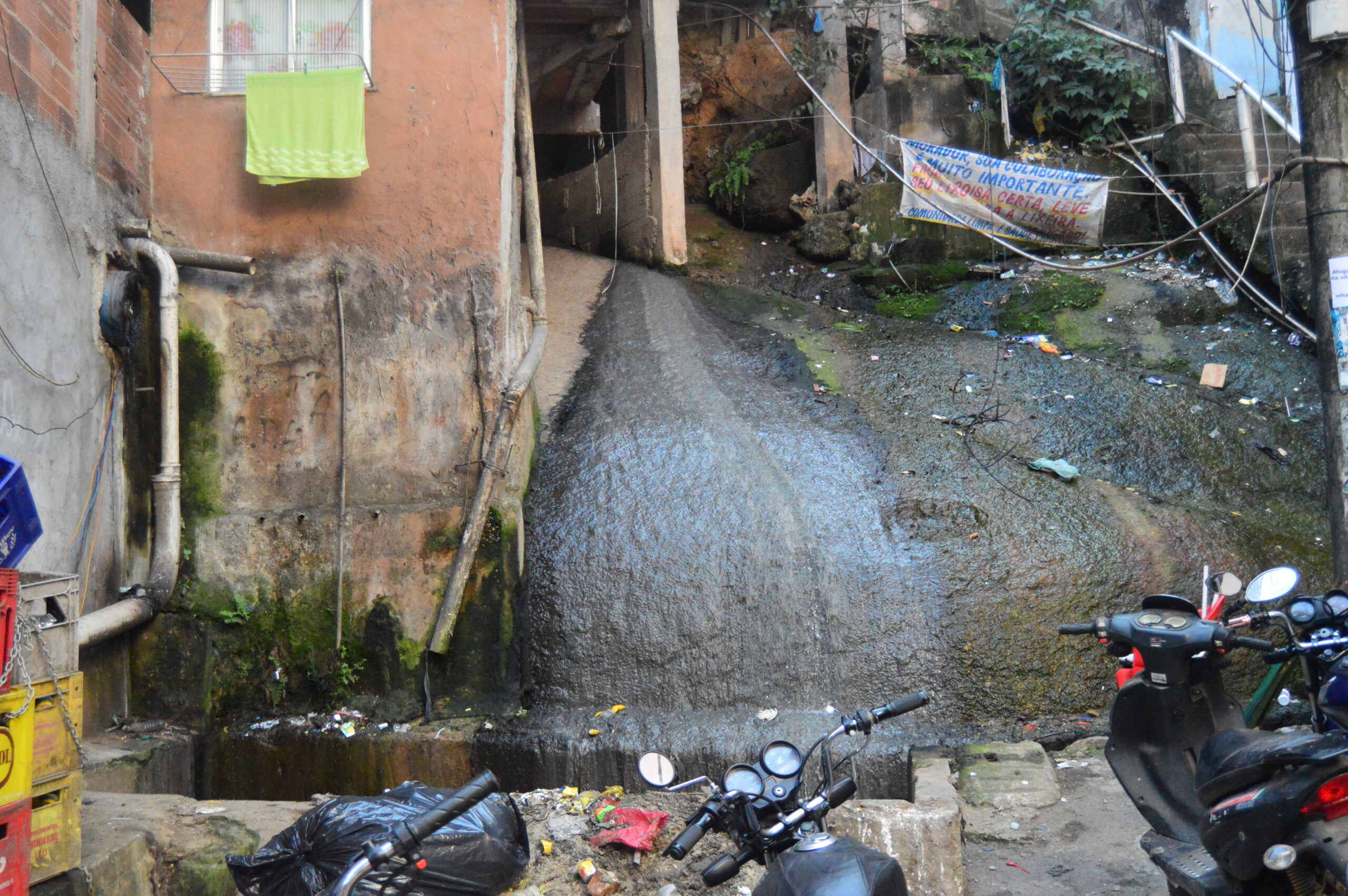 “Even before CEDAE’s water issue in 2020, we suffered from our drinkable water being contaminated with sewage,” said Honório, referencing episodes throughout the last decade when murky, sewage-laden water came out of residents’ taps, even showers, in the favela of Pica-Pau, where he lives. “More and more residents suffer because they are drinking contaminated water. To this day, CEDAE has not come to survey the real situation,” he explained. And even though CEDAE insisted that the water was safe to drink, “many elderly people and children are suffering from diarrhea and itching. They are unable to afford drinking water, especially in times of the pandemic,” he said.

Today’s are thus far from the first water crises to hit residents of Rio’s favelas. The issue goes back more than one hundred years for favelas like Morro da Providência, Alvez-Roque pointed out. “We [were] the first favela, and we [still] have a very big sewage problem.” Pessoa said that in “neighborhoods of [Greater Rio’s] Baixada Fluminense there is no access to water in the middle of the pandemic. There is also water intermittency, places where equipment breaks and they run out of water. We have sanitation deserts.”

“Another issue is the very structure of the houses in favelas and deciding on appropriate technologies. There is a very big difference from Vale Encantado to Rocinha, to Maré,” said Britto, insisting that “the central issue is lack of systems. In Rocinha, 21% of houses have no plumbing inside.”

Alvez-Roque explained that in some houses, water tanks could not be properly placed. “I created a project so that people could store water, but the people who needed it the most could not have it because the house had no structure for this.” Alvez-Roque is also at the forefront of a current project in Morro da Providência called “Wash Your Hands”, which installs sinks in public, accessible spaces.

Several of the panelists also noted that even when there is infrastructure in place to provide water access, “if you have a problem in the sewage system, when you pump water, it often has a strong sewage smell.” In Morro da Providência, Alvez-Roque says, “the sewage runs out in the open.” Honório described a harrowing situation, saying that when it rains in Pica-Pau, “the community is like a river [all flooded]. Then, you have poop everywhere. There is no technical supervision on how to install a sewer pipe.” Contamination arises in the context of lack of technical support for installing both water and sewer pipes. In Pica-Pau, residents are left with dirty water in their taps, exposed to harmful bacteria and diseases. As many lack the resources to buy bottled water, they are told to boil their water before consumption.

Solutions from the Favelas

Given the “variety of typology that we have in Rio—favelas on cliffs, flat favelas, etc.—, the lack of reservoirs, problems with frequency of water supply,” asked Britto, “how do we adapt these systems to more sustainable technologies?” She argued that “it doesn’t have to be the same system everywhere,” but insisted that “there are questions that need to be asked to understand what would be the best technology to deal with these issues.”

The lack of sufficient basic sanitation infrastructure and policies in favelas has placed residents at the forefront of solving water problems historically, and especially now during the pandemic: “the systems that were established did not grow at the same pace as population, and so the population establishes new [water] connections, installs water pumps, and all that creates [new] problems. People make do themselves because no one can live without water,” explained Britto.

Through the Wash Your Hands project, created during the pandemic, Alvez-Roque and partners in her community installed 64 sinks with soap in and around Morro da Providência. Of those, Alvez-Roque said the most-used sinks are those bordering a traffic tunnel that passes beneath the hill that is home to the community, “because they serve the homeless population.” The soap is “made with reused oil” using a traditional technique and distributed to families in the favela, she said. Alvez-Roque has produced seven thousand liters of soap.

Meanwhile, in Vale Encantado, one biodigester receives organic waste from the community’s cooperative restaurant and produces biogas. “This gas comes back to the cooperative to bake cakes, pies, and other products we make,” said Barros. Meanwhile, a second biosystem, including a larger biodigester, increasingly processes the community’s sewage. Five of the community’s 40 or so homes are now set up. Prior to the pandemic, the community had plans to complete the system in 2020. “The biodigester also generates biofertilizer, which is used in the community. This material, with its many nutrients, we intend to bottle and sell. We are able to treat this sewage instead of it going into the forest.” 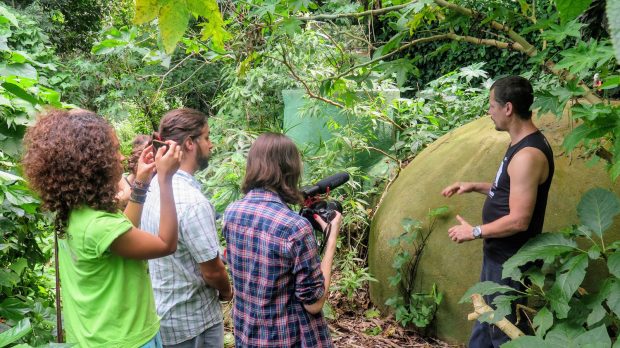 Fábio Miranda, the panel’s special invited speaker from São Paulo, who created the trailblazing Sustainable Periphery (Periferia Sustentável) project focused on implementing renewable energy systems in the peripheries of São Paulo and across Brazil, said, like Barros, that they were “taking what people call trash and transforming it into a source of energy.” Amusician and inventor, Miranda showed participants around his sustainable technology laboratory at the Favela da Paz Institute in São Paulo: “Here is the laboratory with automation systems, laser cutter, 3D printer.” He showed the audience the solar-powered flushing system that he created for their toilet, which “uses on average 6 Liters,” describing how low-cost, sustainable technologies can be integrated in favelas.

Reis presented the project CocôZap, in which residents can denounce sanitation problems. CocoZap has a WhatsApp number (+5521999573216), “people send messages and the data are saved online.” Through use of the collaborative framework, she explained, residents can engage in and influence local policies.

Some locally-developed initiatives try to cater to the basic needs of populations at a low cost. An example of this is the Águas da Baixada project. Realized by Engineers without Borders Brazil with support from Tetra Tech, this project focuses on “making rainwater drinkable through filtration and disinfection,” explained Gama.

Britto ended the discussion by praising the solutions that her fellow panelists presented: “I think that these alternatives, in addition to being more ecologically sustainable, can be forms of resistance against profit-driven models that seek to privatize [our public utilities]. I think this is a beacon of hope.”

*The Sustainable Favela Network is a project of Catalytic Communities (CatComm).