On August 5, 2016, as Rio held the 2016 Olympic Games’ opening ceremony, openDemocracy featured on its homepage Catalytic Communities’ Executive Director Theresa Williamson’s analysis of the true legacy the Games will leave Rio. To read the full article click here. A complete version of this article is available as a chapter in the forthcoming book Occupy All Streets: Olympic Urbanism and Contested Futures in Rio de Janeiro.

The heavily corporate city Rio has attempted to create, resulting in exacerbated urban problems of spatial, economic and social inequalities, is creating the conditions for Rio as the Singular City. 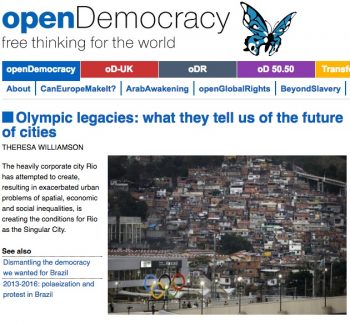 From New York City to Berlin, Hong Kong to London, conflicts have been increasingly recorded in recent years between two urban camps. First there are those who view the city as fundamentally commercial, drawing on the city’s origin as a place of exchange made possible thanks to agricultural production – a place of economies of scale and agglomeration economics, most dramatically represented in the concept of the global city. At their extreme, proponents of this vision of the city will insist cities are essential links in a global economic system and that this is what makes them important.

Second are those who experience the city as fulfilling a human need for connection and social interaction. “The city… is a natural manifestation of that social instinct that we have. Cities define us. It’s where we’re born, get educated, grow up, get married, where we pray and play, where we get old and where we die,” explains political theorist Benjamin Barber. This perspective on the city is most clearly represented in those who fight for recognition and implementation of the Right to the City, as explained by David Harvey: “The right to the city is far more than the individual liberty to access urban resources: it is a right to change ourselves by changing the city. It is…a common rather than an individual right since this transformation inevitably depends upon the exercise of a collective power to reshape the process of urbanization. The freedom to make and remake our cities and ourselves is…one of the most precious yet most neglected of our human rights.”

Those adamant about this vision will argue there is no compatibility with the first vision and that economic localization is the way of the future. And it can be argued to be a central solution to many of the world’s current dilemmas, if we are to believe, as Barber insists, that cities are where most important decisions that affect people’s lives today are made.

In Rio de Janeiro during the pre-Olympic period (2009-2016) the seesaw came thundering down on the side of the heavily commercial approach. A huge one-time Olympics injection of US$20 billion has been applied almost exclusively towards investments that support vision #1. As a result, the underlying nature of this approach and the inherent conflict between these visions has become palpable.

Click here to read the full article on openDemocracy, including sections on both (1) the purported Olympic legacies and what was delivered, and (2) the real, unplanned legacies Williamson sees from the Games in Rio.