The Sustainable Favela Network (SFN) is a project of Catalytic Communities (CatComm) designed to build and reinforce solidarity networks, bring visibility and develop joint actions to support the expansion of community-based initiatives that strengthen environmental sustainability and social resilience in favelas across the Rio de Janeiro Metropolitan Region. The project began with the 2012 film Favela as a Sustainable Model, followed in 2017 by the mapping of 111 sustainability initiatives and the publication of a final report analyzing the results.

In 2018, the project organized intimate on-site exchanges among eight of the oldest and most established organizations that were mapped in the Sustainable Favela Network, followed by a full-day exchange with the entire network that took place on November 10, 2018. Watch the video that accompanies the exchanges featured in the 2018 series by clicking here.

In 2019, the project is organizing the second round of on-site exchanges—this time open to all SFN members and the general public alike—at projects based in Babilônia, Camorim, Pavuna, Vila Kennedy and Manguinhos. This second exchange of the year featured a visit to the Camorim Quilombo, which had been devastated by rains earlier in the year. As such the focus was not only on learning about the Quilombo do Camorim, but on a collective action to clean, replant and beautify the historic site, followed by a lightning round of capacity-building on approaches to fundraising (or resource-raising) presented by SFN members. The program is supported by the Heinrich Böll Foundation Brazil.

Second Exchange of 2019 Held as a Collective Action

On the morning of Saturday, August 10, 69 people came together at Quilombo do Camorim in Jacarepaguá, in Rio de Janeiro’s West Zone ready to get their hands dirty. Adilson Almeida, founder and president of the Camorim Cultural Association (ACUQCA) greeted the group on arrival, explaining how the quilombo was severely impacted by the intense rains that raged across Rio earlier this year. Almeida, who founded ACUQCA in 2003 to revive, preserve, and promote quilombola culture (archaeologists have identified materials at the site dating back to the 1500s) explained that the rains had swept away their community garden and led to invasive grasses so thick and tall that despite regular attempts, members of the quilombo were unable in all of these months to clear it. They had thus been unable to hold their customary public and community events ever since April of this year.

Due to this damage, the recently launched Gardens and Reforestation Working Group of the Sustainable Favela Network decided to make Quilombo do Camorim the focus of its first act. In response to requests for help from Almeida, the Network organized its second exchange of 2019 as a mutirão—the Tupi-origin term for collective action, widely used in Rio’s communities to describe collaborative efforts to revitalize community spaces.

After introducing the tasks to be done, Almeida invited participants to join one of three groups: one pulling out the widespread infestation of tall grasses, a second recovering the community garden, and a third covering the walls with graffiti marking the quilombo’s presence to outsiders. Various collectives came out in support of the quilombo: Planta na Rua, an urban gardening collective that works citywide brought equipment, seeds and saplings and directed the replanting of the community garden. Representatives from community groups as well as Engineers Without Borders worked tirelessly with brush-cutters and other equipment to clear the invasive grasses. Meanwhile, 16 utterly dedicated youth from Cine & Rock, a music and culture organization from the West Zone favela of Rio das Pedras, supported both sets of activities. 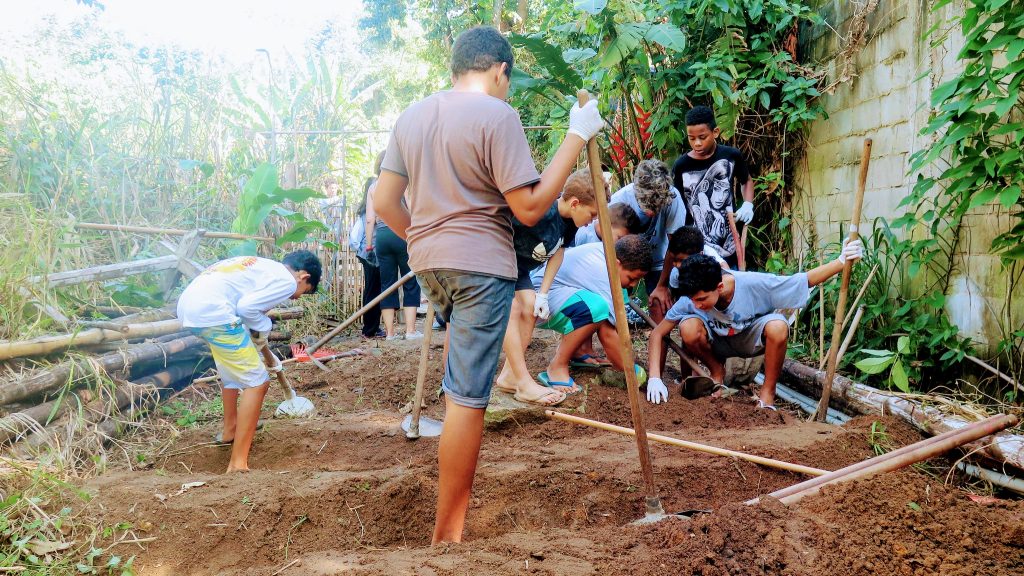 While volunteers worked to clear debris across the quilombo, the women of Preta Pinta Preta (Black Women Paint Black Women) worked on the goal of covering the quilombo’s entrance with fresh, evocative graffiti on Afro-Brazilian themes. The group brought their artistic talent to the day’s efforts, working all day to cover the quilombo’s walls with murals of iconic Afro-Brazilian figures.

A women’s graffiti collective from Rio’s North Zone, Preta Pinta Preta uses graffiti to value the ethnic cultural identity and memory of black artists. The group has painted murals in public schools across Rio de Janeiro, but was drawn to Saturday’s exchange for the opportunity to represent historically important black Brazilian women. The collective’s artwork featured Carolina de Jesus, Dandara dos Palmares, Maria Felipa, and Ruth de Souza—all crucial figures in the fight against racism and colonialism. Nahya Nogueira, one of the collective’s artists, explained their selection: “Our choice of images came from a conversation. We felt we needed a strong representation of our black Afro-Brazilian society.” 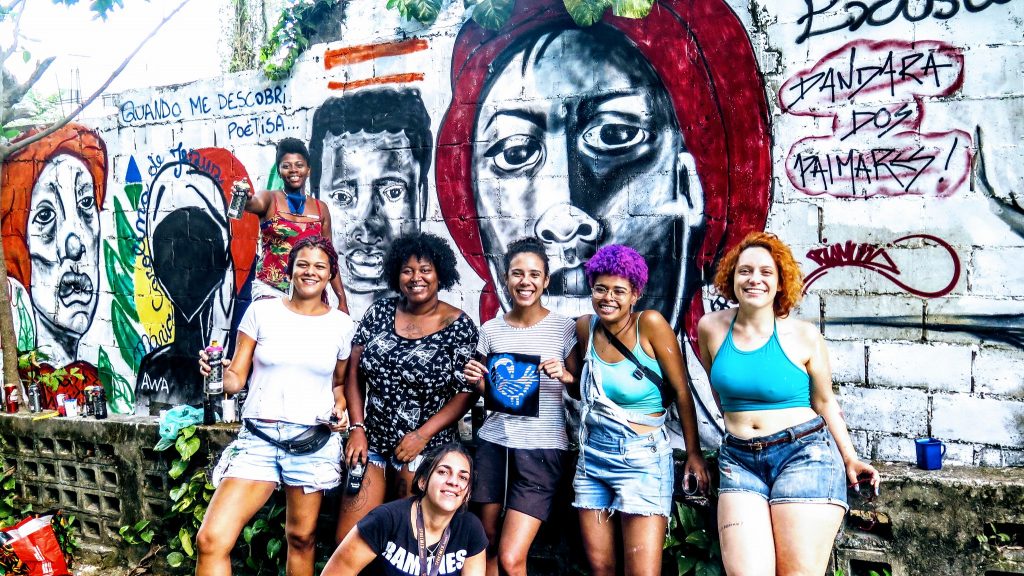 Jussara Miranda Gomes, Nahya Nogueira, Thais Ramos de Cunha, Natalia de Souza Flores, Juliana Messias, Izah Beyaz and Carina Bickel each put their artistic talents to work. At the quilombo’s entrance, Souza Flores painted Camorim’s symbol: a sankofa, an Adrinka image of a bird turning its head backwards with its feat firmly planted forwards, symbolizing the need to consider the past as we move into the future. Painted alongside the ACUQCA logo, the sankofa faces the community, serving as a reminder to look to history as a means for bringing past knowledge to future decisions. 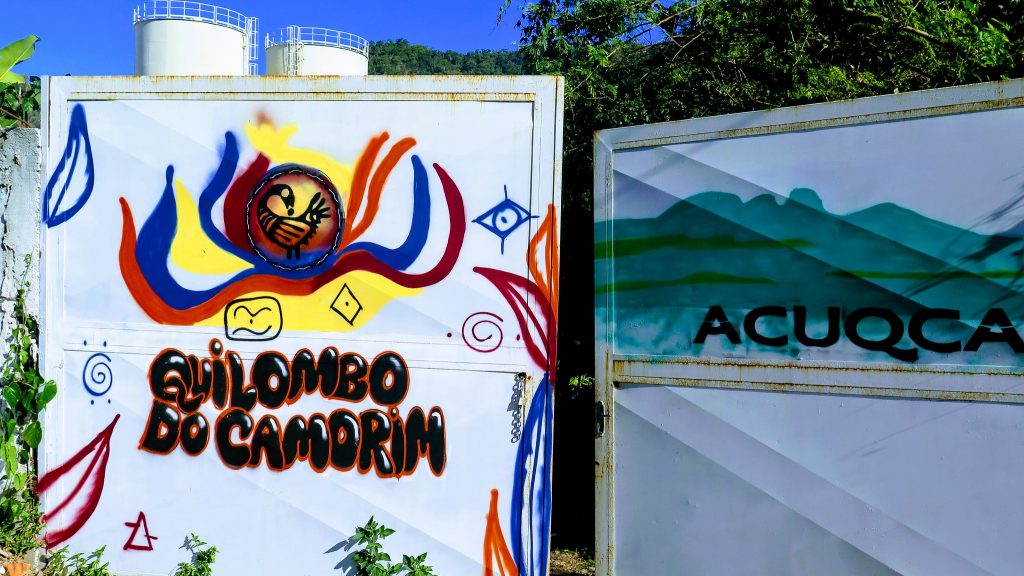 As the group gathered at the quilombo’s outdoor tables for a much-needed lunch, Almeida recounted his personal history with the space and with the development of ACUQCA. Born and raised there, Almeida dedicates his life to reconnecting with the quilombo’s ancestral heritage. Since beginning their journey to be recognized nearly two decades ago, and despite proof of 400 years of history under their feet, Quilombo do Camorim has faced countless threats in the past 15 years, including challenges to its status as a quilombo and outside construction on land belonging to the quilombo. In 2015 a massive condominium complex was built for the 2016 Olympics media village atop an ancestral burial ground. Hundreds of centuries-old trees from the sacred site were felled.

In the face of these threats, Quilombo do Camorim remains resilient thanks to the work of Almeida and other ACUQCA members and volunteers. The association hosts several annual community events during historical dates as a means of caring for, connecting with, and maintaining Afro-Brazilian traditions. Regular capoeira classes and jongo dance circles, along with annual Saint George, Dandara, and Zumbi dos Palmares festivals, help Quilombo do Camorim preserve quilombola culture. 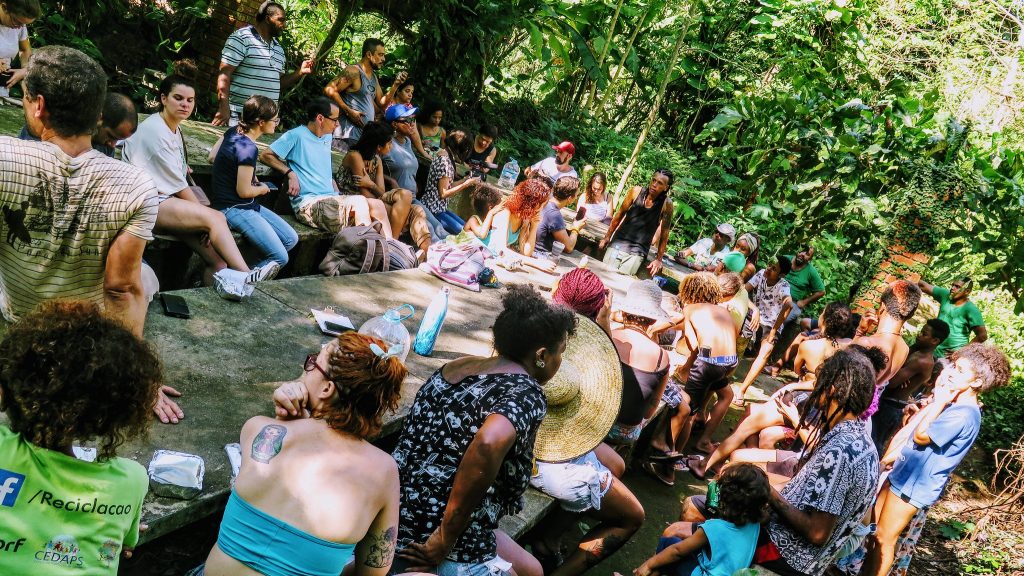 Almeida closed lunch expressing his sincere gratitude to the day’s participants. He then guided the group in an exercise, instructing everyone to clap together, first using only their index fingers, then two fingers, then three, until everyone was clapping their full hands together at full volume. “Working alone we are quiet,” said Almeida, “but together the sounds of our voices are so much louder.”

After a brief tour of the archaeological site at Quilombo do Camorim, the day came to its third and final segment, with a capacity-building circle focused on captação de recursos (literally resource-raising, though normally translated to English as fundraising), which was identified as one of five major topics of interest by network members at the Sustainable Favela Network Launch in November 2018. Theresa Williamson, director of Catalytic Communities, introduced the session with a brief summary of the history of the Sustainable Favela Network leading up to this exchange.

Three SFN members with diverse experiences raising funds on behalf of community programs then provided the group with practical resources, strategy suggestions, and general guidance to boost participants’ confidence when seeking funding. Edna Thomaz Rodrigues from ADACI Conexão Rio and Educafro Rio began by describing fundraising as “the seduction of a partner.” One’s job in fundraising is thus to infuse a potential donor with excitement and a sense of impact. She also shared practical resources for participants to revisit later, such as the Brazilian Fundraising Association.

Marcele Ribeiro from Favela Orgânica and Projeto Delíria, however, expanded the definition by focusing on resource-raising (rather than myopically thinking of funds as the sole resources to be raised). She emphasized the importance of utilizing the resources already present within organizations, as well as defining exact needs, conducting market analysis, maintaining organizational data, and perfecting proposals. To conclude the circle, Clara Ferraz from Catalytic Communities focused on a practical means of raising dependable funds, that of recurring monthly donations and maintaining relationships with donors. The capacity-building circle was well-received by the day’s participants, many of whom operate projects in their communities and feel the pressure that funding constraints place on their initiatives.

By the end of the day, participants and quilombo members succeeded in both clearing the site of debris and enriching themselves with new connections and organizational capacity. What had been an overwhelming, unmanageable site to quilombo organizers became new and manageable again. And because so many had turned out to help, it was done joyfully and carelessly. It is amazing what a committed group of people can do in one day. The Sustainable Favela Network is thus organizing its third exchange of the year, also as a collective action event, for Saturday August 31, 2019. Join in!

Check out our full album of the day’s events (or click here): 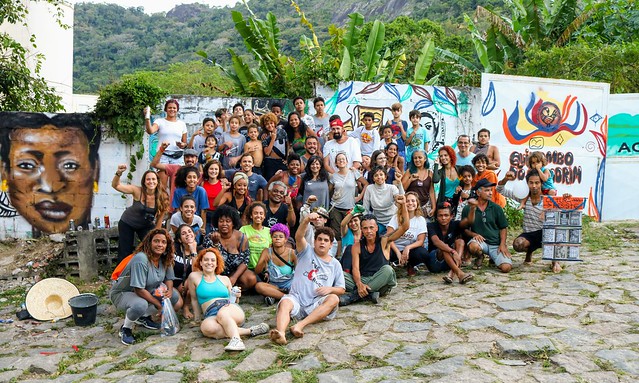