As part of the activities of UN-Habitat’s 2020 Urban Circuit, the Community Land Trust (CLT) Working Group held a livestreamed virtual event on October 20, 2020, facilitated by Catalytic Communities (CatComm), entitled “The Community Land Trust As an Instrument of Urban Transformation: A Debate With Experiences of Rio de Janeiro and Mozambique.” The event featured two researchers and four Rio de Janeiro community leaders, all involved in the struggle for the right to the city. They presented some of their experiences working with the topic and discussed how CLTs can contribute to this fight.

The event was moderated by Felipe Litsek, a researcher, lawyer, and assistant to the CLT Working Group, and featured Ailton Lopes, second secretary of the Residents’ Association of the Trapicheiros favela in Tijuca; Eleonora Dobles, a UN-Habitat Program Assistant who studied Metropolitan Governance and did field research on informal land markets in Maputo, Mozambique; Marcello Deodoro, a member of the Indiana favela’s Residents’ Commission in Tijuca and participant in Rio’s Popular Council; Maria da Penha, a resident of Vila Autódromo and co-founder of the Evictions Museum; Neide Mattos, a resident of Conjunto Esperança in Colônia Juliano Moreira, part of the Minha Casa Minha Vida-Entidades public housing program; and Tarcyla Fidalgo, Rio de Janeiro’s CLT Project Coordinator and a doctoral student in urban planning at IPPUR–UFRJ. 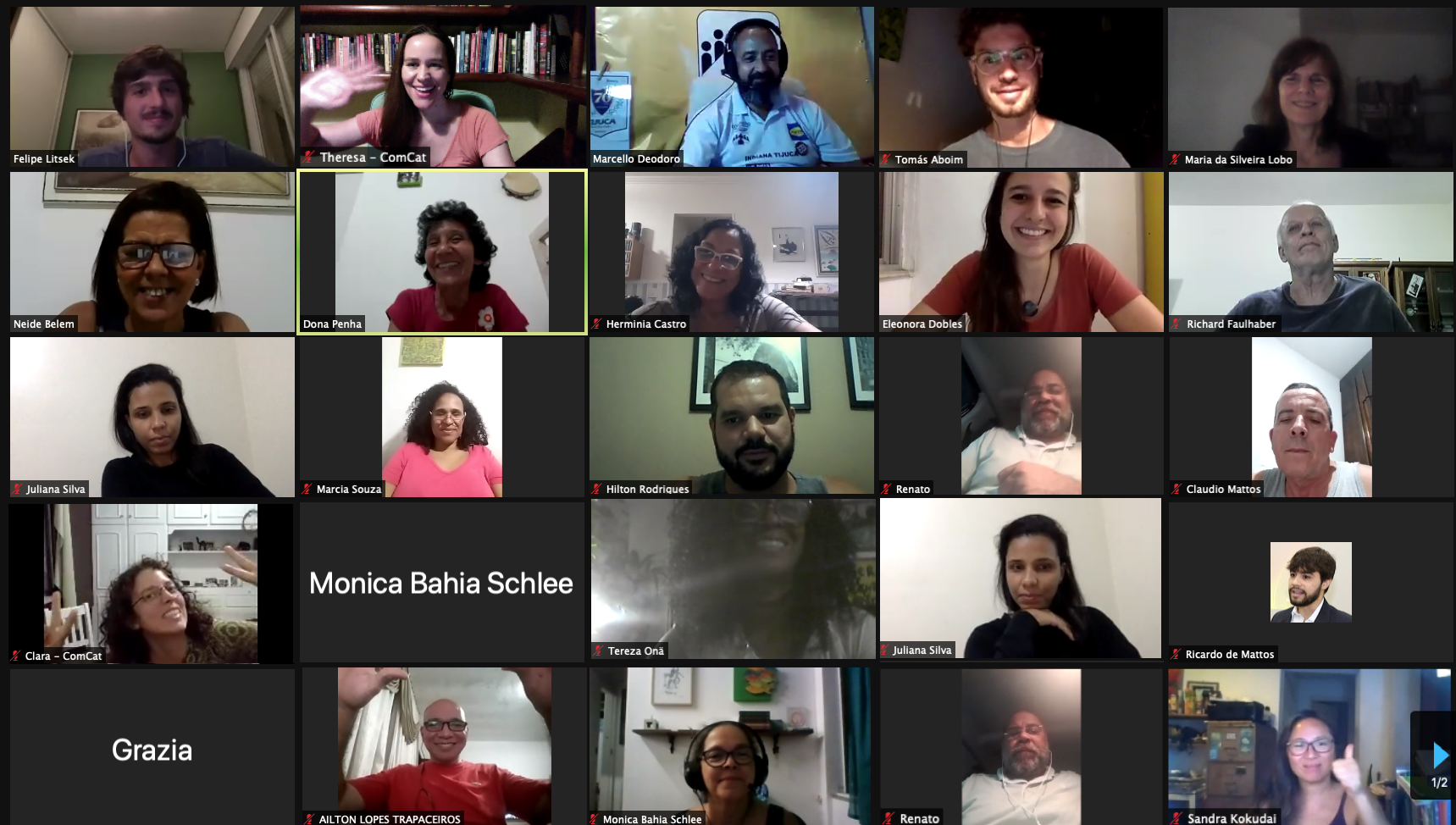 As Lopes explained, the event “brought understanding to those who did not know about CLTs and expanded the knowledge of those who already did.” The event demonstrated that even in different contexts, such as those of Brazil and Mozambique, the same threats of eviction and gentrification exist, despite the fact that, in Mozambique’s case, land is state owned. In Brazil’s case, where CLTs are being introduced in an ongoing process, the community leaders engaged in the CLT Working Group gave exciting testimonials emphasizing what they are seeking from the instrument: legal protection to be able to remain on their land, resisting removal either by the state or market forces, and tools to strengthen and maintain community organizing.

In her presentation about what CLTs really are and how they work, Fidalgo explained that, above all, a CLT is an instrument to guarantee tenure security for vulnerable populations. It deals with a model of collective land management, characterized by separation between collective ownership of land and individual ownership of houses and buildings. By combining legal, social and urban planning actions, CLTs aim guarantee the tenure of residents in their homes and offer permanent affordable housing for low-income families.

The land is owned by the CLT, which is a local non-profit organization formed by residents and managed collectively. The house, its upgrades and yard, belong to individual residents by means of surface rights, which are formalized by a notary public. This way, when they become surface-rights title-holders to their houses, residents have the right to use them as they see fit, and are able to sell, rent or pass them on as inheritance to family members. The land, however, is permanently withdrawn from the market, which maintains the housing permanently affordable.

The cycle of mega-events in Rio de Janeiro brought the biggest wave of evictions in the city’s history, and, according to Fidalgo, it demonstrated that the titling options currently available are no guarantee of permanence in the territory. Entire communities, with or without titles, suffered from evictions either caused by the State and its repressive apparatus, or by the market, when, due to gentrification and real estate speculation, an area’s living standards increased or pressure was put on residents to sell their homes to entrepreneurs, forcing residents to move. It was due to these issues, and inspired by the success story of the Fideicomiso de la Tierra del Caño Martín Peña in San Juan, Puerto Rico—the first CLT in Latin America and one of the few implemented in favelas in the world—that CatComm developed the CLT Project. It aims to make the tool a reality for Rio favelas, demonstrating its potential and working to implement it in the city.

Despite the differences, Dobles stressed that the similarities between Mozambique and Brazil are striking. In addition to Portuguese colonization and certain joint cultural heritages, urban precariousness is a common feature in both countries: “The majority of Maputo, the capital of Mozambique, is occupied by informal communities known as caniços, most of them located on the outskirts of the city and very similar to Brazilian favelas.’’

Since the country’s independence in 1975, the new Mozambican government has prioritized land nationalization: land became state property and its sale is prohibited. There is no ownership, but instead a right of occupation known as the Duat (Right to Use and Take Advantage of Land). “The Mozambican Land Law of 1979 is considered one of the most progressive land laws in the world. Through a designated social function of property, communities in addition to individuals can be legally guaranteed the collective right to use and take advantage of the land with the Duat,” said Dobles.

Recent legislation, however, has partially modified the law, allowing the exchange and sale of Duats, and now it is no longer possible to avoid a common problem in cities around the world: gentrification. “Polana Caniço is the most striking example,” said Dobles. This coastal and central neighborhood of Maputo was traditionally inhabited by low-income populations, but for some years now, in the name of supposed urban regeneration and due to flooding dangers, residents have been moved to peripheral areas of the city, opening up land in an area highly valued for real estate speculation. This process is very familiar to citizens of Rio. According to Dobles, the CLT model has everything needed to help combat such speculative pressure dynamics occurring in Maputo.

All of the community leaders present at the event had experienced threats of eviction, and from the similarities with the Mozambican situation, they emphasized their desire to stay in their neighborhoods and hopes that the CLT would help establish legal pathways to that end. Lopes, a resident of Trapicheiros favela, one of the first two pilot communities of the CLT Project, said “Here [in Trapicheiros] belonging to the favela holds great importance. Many residents were born here and want to live here, and that’s where their grandparents were born and still live today. I was delighted with the CLT. It’s a distinguished tool, a form of protection: we will no longer be a fragile community. We will be shielded against the threats of gentrification, real estate speculation, and evictions, and we will strengthen our sense of community.”

Neide, a resident of Conjunto Esperança, the other pilot community of the CLT Project, says she worries a great deal about the future: “We don’t have land title yet. I am very afraid that 20 years of history will be lost due to real estate speculation. The CLT came as a lifeline. It will bring us a collective title and a solid foundation to ensure that we remain on this land and that I can pass on my home, my trophy, to my son.”

When asked about the importance of communities staying organized, and how to make the favelas true parts of the city, the leaders of the favelas present were unanimous in stating that it is through community mobilization and the strengthening of pride and social identity of favela residents that the stigma attached to favelas can be overcome.

Deodoro, an activist in the community of Indiana, said that the main problem with favelas is their social invisibility: “It is necessary to show to those who do not live in favelas that we exist, we have potential, and we have a voice. It is necessary to cultivate the identity of the favelas, so that we are not ashamed of who we are,” he said. “And also to keep the community active in society, participating in councils, forums, public hearings, promoting solidarity and sustainable economies. All of this reveals our community to people from the outside who come to get to know us and contribute to our struggle. We have to remove this stigma that the favela is a lost territory.”

Penha, a well-known community leader from Vila Autódromo, also said that she is very proud to be from the favela: “We may be poor in terms of money, but we are rich in experiences, in solidarity, and in love in our hearts. We are not afraid of life. We face life with dignity. Every favela has to be proud of its place.” She also spoke of the importance of popular self-organization and the exchange of experiences that is possible through visiting other communities: “Favela residents need to have this knowledge of their rights. In our struggle, for example, we created the Evictions Museum together with educators and residents. Our museum has two purposes: to keep the memory of the residents who are gone, and to be a tool against evictions.”

Mattos added that nothing can be achieved alone, saying it is necessary to unite and organize: “The community’s ability to organize itself is its strength in the future. Just one little bird doesn’t make it summertime. The people united can make a difference.”