Residents of the Trapicheiros favela of Rio de Janeiro are developing the first Community Land Trust (CLT) in Brazil with support from Catalytic Communities and World Habitat. 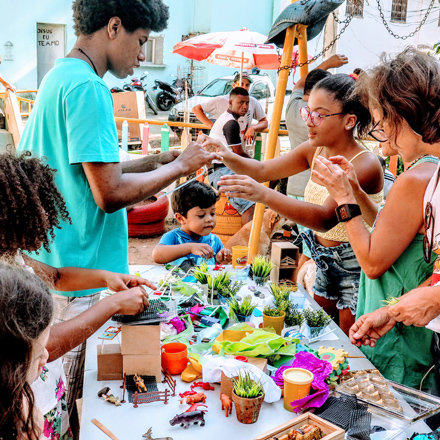 The Trapicheiros favela has existed for nearly a century but residents have recently faced eviction pressures. This new Favela Community Land Trust will ensure residents have control over all developments, including collective ownership of the land. This will ensure they can stay living in their communities, without displacement by either the authorities or real estate markets.

Inspired by the work of 2015 World Habitat Award winner Caño Martín Peña Community Land Trust, the Rio de Janeiro Community Land Trust Working Group – which currently has over 170 members – is developing the pilot programme in Trapicheiros and other communities. They will present innovative land rights solutions that challenge the grave tenure situation that characterises all Brazilian cities.

Through workshops and door-to-door surveys, around two-thirds (65%) of the community’s residents have been reached. Almost all (90%) are interested in the CLT model which has been presented as a way to increase resiliency, solidarity, and strengthen the community to cope with COVID-19 and other crises, whether natural or man-made.

A range of partners are involved in the Working Group, including leaders of communities (Trapicheiros; Esperança; Indiana; Vila Autódromo; and Vila Cruzeiro, among others), public sector representatives (including public defenders specialised in land rights; members of ITERJ, the state land titling agency of Rio de Janeiro; and the Oswaldo Cruz Foundation, Fiocruz), architects and urban planners, and civil society groups like the Projeto Manivela collective, Engineers Without Borders, TECHO and the housing rights movement, União por Moradia Popular (UMP).

The Working Group is currently developing a legislative proposal to regulate the CLT nationwide. This will establish the model in the Brazilian legal system and create the necessary conditions for its widespread dissemination. At the local level, as a result of the mobilisation process in Trapicheiros, the residents were able to pressure representatives to submit Bill 1356/2019, which, if approved, will declare the community an Area of Special Social Interest. This measure will adjust the zoning requirements of the community to better correspond to its reality, given its critical role in ensuring affordable housing, and will also provide supporting conditions for the future establishment of a CLT in Trapicheiros. In comparison with individual titles, the Community Land Trust option ensures the entire community can maintain land and properties, while ensuring permanent affordability.Ailton Lopes, Sub-secretary of the Trapicheiros Residents’ Association, said:

“The CLT is a protective tool, which secures the community against both evictions and real estate speculation. The CLT is comprised of a group of technical allies, volunteers, and community leaders, and it has worked. The community of Trapicheiros, along with Esperança, are two communities developing pilot projects, and we believe the CLT is going to be very successful in Brazil, because we’re very engaged with this cause.”

Maria da Penha Macena, a leader who resisted violent eviction in Vila Autódromo favela, prior to the Olympics, said:

“The CLT provides a better land legalisation [option] overall. I’ll speak for myself [based on my experience]: existing titling options do not guarantee we can stay on our land. I had two concession of use titles from the state government, and even so, to remain on my land I almost died. This right is not respected by our elected officials. I think what we need in the favelas is the guarantee we can stay on our land, and a concession of use [title] is of no use. The CLT, yes, gives protection of the land. The concession of use title we had [in Vila Autódromo] was mostly a tool to fight for land rights rather than a guarantee of our rights. Through a CLT we get the land for us, so we can leave it for our children when we die.”

Orlando Santos Junior, Professor of Urban Planning at the Metropolis Observatory of the Federal University of Rio de Janeiro, said:

“The CLT project is of fundamental importance due to its potential to guarantee the right to housing for popular classes, fighting the forces of real estate speculation and the risk of evictions. It’s a project that promotes local solidarity, the feeling of belonging to one’s community and the right to the city.”

“With the growth of capital financialisation, the CLT project emerges as an opportunity for favela residents to discuss the role of individual property titles and their limits as a form of protection for the right to housing as a basic human right and to propose another form of legal protection.”

“Beyond land tenure, CLTs also offer a path to securing and maintaining true community development that builds on the qualities of community life inherent to favelas.

“Thanks to support from World Habitat, we are working with Trapicheiros’ residents, through diverse workshops, meetings, events and door-to-door activities; achieving resident mobilisation; mapping the community; conducting community planning; and designing alternate laws to facilitate the implementation of CLTs – not only in Trapicheiros, but across Brazil.”

“About a billion people worldwide live in informal settlements. Many suffer from weak land security and poor infrastructure. The Caño Martín Peña project in Puerto Rico has pioneered the use of the Community Land Trust to regularise land ownership for the community, put residents in control and set the stage for improved services.

“Trapicheiros is the next exciting step on a journey that offers hope of a brighter future to millions of people in informal settlements across the world.”

The pilot Trapicheiros CLT will be the first step in a movement working to establish the right to adequate and accessible housing in Brazil – initially for all residents of Trapicheiros. Once it has been established it will provide a template to inform the planning of further CLTs, and to inspire legislation to support future expansion.