In 2000, there were no initiatives working to share civic solutions online en masse. Yet communities across the planet were, as they had always been, developing local solutions to everyday challenges. Nowhere was this more evident than Rio de Janeiro, where favela residents had over decades, and in some cases a century, developed entire communities in response to challenges with little or no outside support. They were developing their own urban infrastructure including sewerage systems, housing, neighborhood plans, HIV prevention programs, fluoride treatment schemes, daycare centers, elderly-care centers, soup kitchens, tree-planting programs, after-school sports and arts programs, and an endless list of other local innovations. “Necessity,” as they say, “is the mother of invention.” And Brazil was No. 1 on the London School of Economics’ list of countries exhibiting “entrepreneurship by necessity” in 2000, which extended beyond the for-profit sector and into the civic world. In Brazil, 99% of businesses are micro-businesses and the favela economy is worth about US$20 billion per year. At the same time, the Internet was beginning to take off, with municipal and private sector plans to bring the Internet to communities across the city (at the time, only 70 of Rio’s 600+ favelas had Internet access). 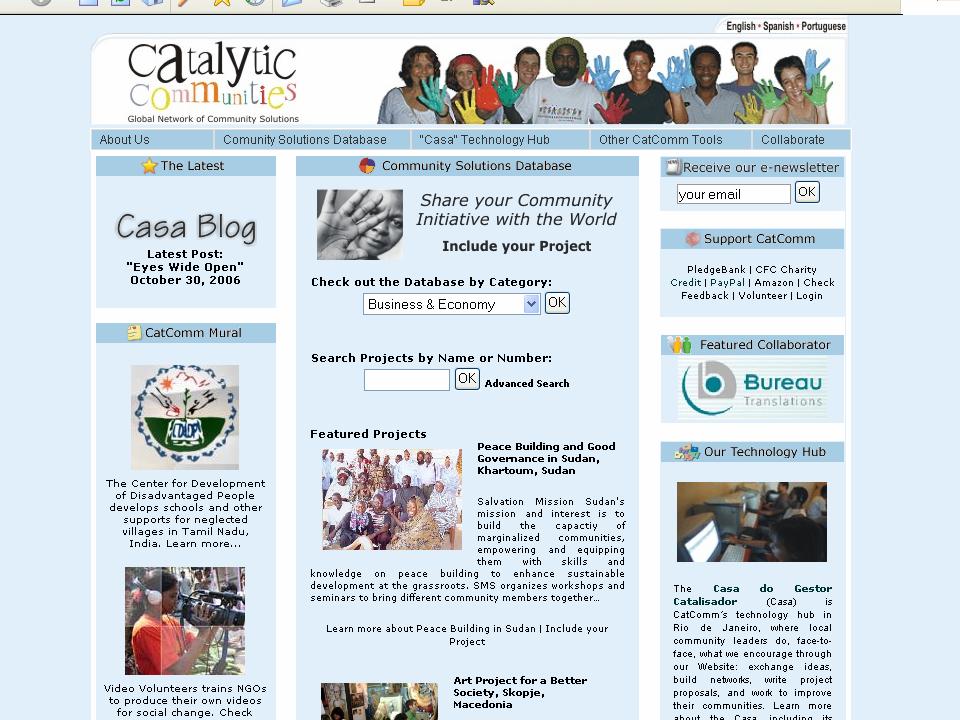 Recognizing the opportunity for solution-sharing across neighborhoods in Rio and around the world, CatComm launched its founding project: to develop the Web’s first open-access database of detailed community solutions. With the Community Solutions Database (CSD), we set off to “develop, inspire and empower a global network of communities generating and sharing solutions.” Though our focus was Rio de Janeiro, we recognized there was no reason to limit an online database to one city, and that learning would be greater with more diversity in the mix. We began to develop our network of volunteer translators, and the database was made available in Portuguese, English and Spanish. After a two-year pilot site, the formal CSD was launched in late 2002.

Shortly after launching the database we realized the impact that creating an online presence for community organizations had on their development. At the time the only way to create an online presence was to spend resources on a website, something almost no community-based initiative was in a position to do. Our database served this very important purpose, helping hundreds of community efforts get a foothold on the Internet, helping them do everything from acquiring funding to opening a bank account. Journalists and volunteers also used the tool to locate community efforts to cover and support. The CSD helped make historically isolated community efforts visible and accessible to a global audience. It set the foundation of what CatComm was to become–a local organization shedding a global spotlight on community efforts to secure their widespread recognition and replication.

Between 2003 and 2008 CatComm helped carefully document and translate over 200 community solutions from across Rio de Janeiro’s favelas in the Community Solutions Database. Projects from over 20 other countries were also documented through the Web. In 2006 we won a Tech Award from the Tech Museum of Innovation in Silicon Valley for this contribution of ‘technology benefitting humanity.’ The database was the subject of a radio piece by the widely-respected late urban economist Dr. André Urani.

Watch the Tech Awards video, featuring an earlier version of the database:

Come 2008, as the conditions that set the stage for creating the Community Solutions Database changed, the organization reevaluated the current need for such a tool and concluded that with the rapid changes beginning in Rio de Janeiro, the expansion of free online social media publication tools communities could now access, and the creation of other open-access databases online, it was time to retire the CSD. We partnered with WiserEarth, whose database we deemed most compatible to our own, and transferred all contents from the original CSD to their platform. We also translated WiserEarth to Portuguese and managed their Portuguese platform for over a year.