Catalytic Communities’ 2010 course “Strategic Use of the Most Recent Virtual Communication Tools,” was designed to build capacity for community organizers in Rio to advance their own organizations and causes building an online presence through new channels and representing points of view that mainstream media ignore.

Community leaders from across the city learned how to produce stories and video, publish them online, then develop social networks to disseminate this information. They are now networked users of Twitter, Facebook and WiserEarth. They learned how to make, edit, and share videos using MovieMaker and YouTube. And, in addition to learning how to create personal blogs, they were invited to contribute to RioOnWatch.org.br in Portuguese, and RioOnWatch.org in English, CatComm’s community news sites reflecting community voices in the lead-up to the 2016 Olympic Games.

Being the first of its kind in Brazil, our social media course was in high demand. We received almost 100 applications from over 40 communities in the first week. Community leaders from the states of São Paulo, Amazônia, Bahia, Piauí, Rio Grande do Sul, and Pernambuco and even leaders in our network as far as Kenya and Nigeria showed interest in participating. In addition to training individual community leaders to use social media to support their local programs, we help them use social media collectively to impact how they are perceived, how knowledge is shared, and how their communities are treated in future. 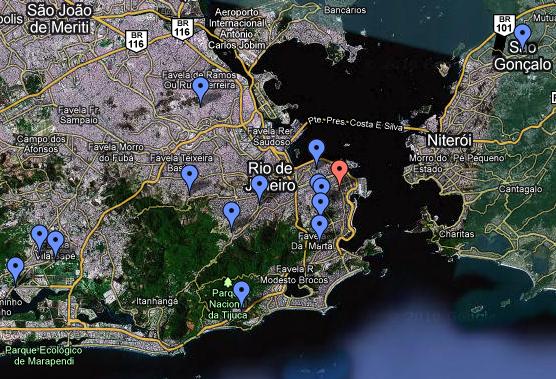 May 2010: Community leaders came from all over the city (blue dots) to train in social media with us (red).

Between May and December 2010, we trained 180 leaders from 50 communities (see maps for May, June-July, August-September courses). Among the students were: Jane Nascimento, director of Vila Autódromo’s Neighborhood Association, who wanted to take CatComm’s social media course in hopes of changing the fate of her community, which was scheduled for eviction in preparation for the 2016 Olympic Games; Luciano and Maristela, from Morro da Coroa, whose brother was shot dead by the police, wanted to use social media to expose police negligence in the killing of ordinary citizens; and Paulo, IT Manager for community radio station Núcleo Barreto, looked to expand his means of communication to reach a wider audience.

The course took place once a week for three hours in Fundição Progresso thanks to a partnership with the Committee for the Democratization of Information Technology (CDI), in downtown Rio and included background and step-by-step training in blogging (Blogger and WordPress), social networks (Twitter, Facebook, and WiserEarth), and video production (MovieMaker, YouTube, Vimeo). Additional and future modules include advanced trainings in Audio Visual production, journalism, and organizing tools. The class was developed in-house by CatComm staff with input from social media experts. It was featured in a host of Brazilian blogs and newssites, including Portal do Aprendiz, Observatório das Favelas, VivaFavela, FavelaDaRocinha.com, and Blog das Redes.